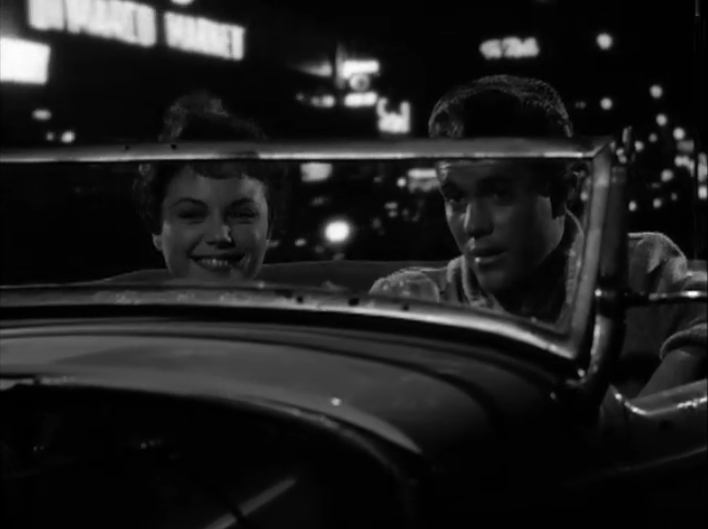 Once again, American International Pictures (AIP) takes us deep into the 50’s teenage underbelly with Hot Rod Gang.  Only, there’s not a lot of hot rodding going on in this flick.  Still, if it’s from AIP, you know you’re in for some B-Movie fun.  Many of the elements of AIP’s teen films are here…rebellious youngsters, fast cars, rock ’n roll cameos, and goofy supporting characters.

John Ashley plays John Abernathy III, a wealthy college student living with his two spinster aunts.  For all they know he is a model young man…studying hard, playing his violin…but what they don’t know is that he spends much of his time racing his hot rod and singing in a rock n’ roll band. Gasp!  His secret life almost gets exposed right at the beginning of the film when he speeds past his family attorney, Dryden Philpot.  Though Philpot doesn’t recognize him, he is outraged and calls the police.  Philpot is actually on his way to see John and his aunts with a young lady in tow.  It seems that John has reached the age where his father’s will allows for him to begin seeing carefully screened young ladies for dates, while chaperoned, of course…such as oboe playing Lois Cavendish (played by Jody Fair).

Lois is intrigued by John’s secret life, but all is not well for the Hot Rod Gang. Though John is loaded, the gang is low on cash, which means they can’t fix up the hot rod so they can win prize money in the big race to pay off their landlord is threatening to kick them out of their hangout.  Got all that?  Luckily, Lois has an idea!  It seems that she knows rocker Gene Vincent who just happens to be in town.  She sets up an audition for John and Gene is impressed.  He offers John a guest spot on his upcoming show, but John is afraid of being recognized by his aunts.  So Lois plasters a fake beatnik beard on him and gives him the coolest stage name she can think of…Jackson Dalyripple!?!?  Now I wasn’t around in 1958, but I dare say, I doubt that anyone named “Dalyripple” was ever considered cool.  Well, long story short…Jackson Dalyripple ends up being a huge success, but a rival hot rodder tries to unmask John and spoil the fun.  Fisticuffs and a rear projection car chase follow.

Hot Rod Gang leaves a lot to be desired.  The plot is way too complicated and has very little to do with cars.  You’d think with a title like this that we’d have lots of drag racing, car crashes, endangerment of people and property…but there’s almost none of that.  The cars put in a barely a cameo appearance.  The focus seems to mainly be on bearded Elvis impersonators.  The plot should’ve simply been good hot rod gang versus evil hot rod gang.  Heck, AIP made great movies with a whole lot less plot than that! 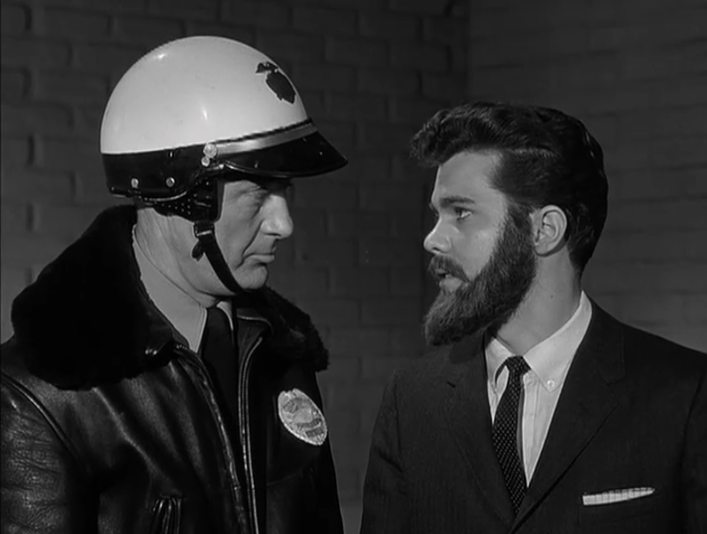 But hey,this AIP, which means there’s still a lot of goofy fun.  The best moments of the film actually come from John’s two bizarre elderly aunts, Abigail and Anastasia.  These two chicks are crazy!  They remind me of the old lady characters the members of Monty Python often played.  They have some genuinely funny lines and in some ways seem to represent the voice of the filmmakers saying, “we know this is dumb, just roll with it.”  There is also some great classic music, especially from Gene Vincent, though he seems lost when in comes to acting.

I guess I recommend Hot Rod Gang for the nostalgia value and the fun that is inherent in just about anything from AIP.  But chances are when you get to the end you’ll say, “that stunk.”