What a title…”Hot Cars.”  It has so much potential.  Okay, so “hot” means stolen…so we should have some teen hoods swiping cars.  The cars should be suped up, right.  Lots of rock ‘n roll, teens in trouble…that sort of thing.  Nope.  The stolen car part is right, but if the title of the film were truly describing the plot it would be called “The Story of the World’s Dumbest Car Salesman.”

John Bromfield plays Nick Dunn, a used car salesman who, as the film opens, is out for a test drive with an attractive potential customer played by Joi Lansing.  Apparently, taking prospective customers out for drinks was a standard part of a test drive in 1956…but even so, she doesn’t buy.  This angers Dunn’s boss, who is pushed over the edge later that night when Dunn dissuades a customer from buying a certain car.  Dunn ends up fired, which is not a good situation since he and his wife have a sickly, but never seen, young son at home. 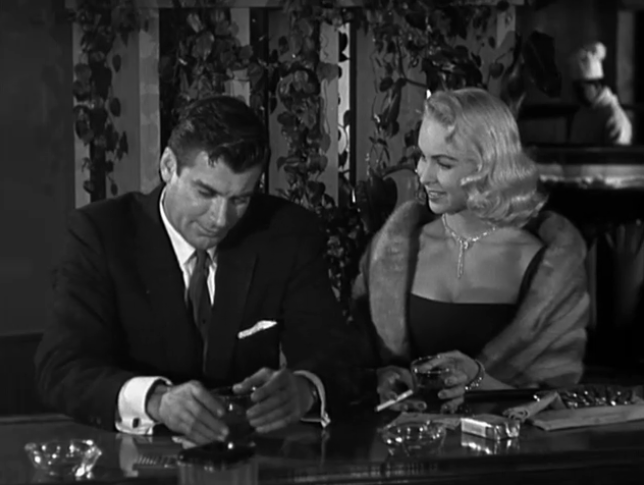 But things turn around for Nick.  It turns out that the man he gave the honest dope to on that car was actually the owner of a chain of car lots himself.  He was scouting for an honest salesman, having found one in Nick, he offers him a job.  But Nick soon learns that something is not right.  I guess the fact that new inventory is delivered to the lot at night by a truck driver who insists that all the lights be turned off tipped Nick off that the cars were stolen.  At first he quits, but when his sons medical bills climb, he goes back to work…selling cars he knows are stolen.  Trouble grows when a cop from San Francisco looking into a ring of stolen cars shows up.  Things don’t get any better when Nick continues to run into the young lady from the beginning of the film.  Little does he know that she works for the crooks too and is setting him up for a fall.

“Hot Cars” is a compact little B picture.  It’s only 61 minutes, but it’s a long 61 minutes.  There just isn’t much interesting going on here.  The characters are all pretty flat.  Even the mysterious woman character is pretty boring.  But the lead character is the dullest of them all.  Nick is supposed to be an honest guy, but he keeps on doing really dumb things.  I mean right off the bat he’s having drinks with some strange woman while out on a test drive.  But then he tells his wife about it and she seems to accept it as part of his job!?!

A 50’s B picture about stolen cars should have plenty of action, there is none of that here.  Oh…except of course the final fight sequence which takes place on a roller coaster.  This scene is just plain weird.  Nick chases one of the baddies into an amusement park.  When the crook jumps onto the roller coaster, Nick climbs up and boards the already moving car.  But here’s the thing about roller coasters, if you’re riding one, I can guarantee you that at the end of the ride you’ll be right back where you started.  Nick could’ve just stood there and waited 2 minutes for the guy to get back.  Still, this sequence is the one moment of goofy fun I expect to see in 50’s B-movies.

If you are willing to dig through 50’s B-movies, you will find many forgotten classics.  This just isn’t one of them.