Some cities just have all the fun when it comes to giant monster attacks. You’d think Tokyo has the corner on the market, but New York has certainly dealt with their share of giant creatures, too. I guess after King Kong, New Yorkers can handle anything. But Kong was like a girl scout compared to the monster in this movie. I mean, Kong just climbed up a building with a pretty girl and swatted at a few airplanes. This thing, goes around plucking heads off of window washers. What am I talking about? A creature so horrible it only needed one letter to describe it. Courtesy of producer Samuel Z. Arkoff, 1982’s “Q.” As the film begins, the NYPD has their hands full. Nude sunbathers are being plucked off of rooftops, disembodied legs are being found in the street…typical Tuesday in Manhattan stuff. But if that weren’t enough, other bodies are being found flayed…skinned, in other words. The events seem unrelated until Detective Shepherd (David Carradine) learns about the Aztecs at a local museum. Not only did they engage in human sacrifices in which the victims were skinned, but they also worshipped a giant winged serpent called Quetzalcoatl (that’s the only time I’ll use the name in it’s entirety, so enjoy it). Could it be that an Aztec cult is loose in New York and has resurrected a nasty giant bird god? Shephered’s partner, Sgt. Powell (Richard Roundtree) isn’t convinced, but Shepherd continues his investigation none the less.

Meanwhile, we meet Jimmy Quinn (Michael Moriarty), a wannabe jazz pianist who works occasional jobs as a getaway driver for diamond thieves. During one job, when the goods end up in his mitts, he makes his escape from the cops by hiding in cone of the Chrysler Building. While there, he discovers a huge nest complete with egg. A few days later, when some of his partners come looking for the diamonds, he leads them up the tower so they can become bird chow.

When the cops eventually nab Quinn, he overhears the talk of a giant bird while waiting in the police station. He then works out a deal to lead the cops to the Q’s nest in return for a pardon from his crimes and a hefty sum of money. What follows is an epic battle of man vs. bird god high above New York City. 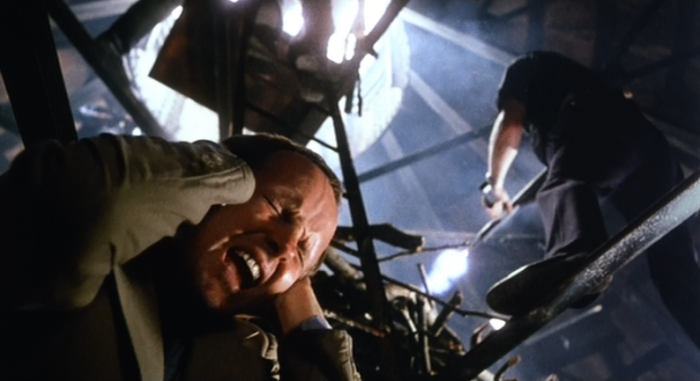 I’ve seen some other reviewers call “Q” and homage to giant monster movies of the past. Homage nothing! This is directed by Larry Cohen, produced by Samuel Z. Arkoff. These guys don’t pay homage to exploitation films, they make exploitation films! The cast features Shaft himself and Caine from “Kung Fu!” There’s even a bit part played by baseball player Ron Cey! This IS and exploitation film…and a pretty fun one at that. The movie does get pretty grisly (prepare yourself for shots of flaying, campers) but there’s also several funny moments in the scripting. Best laugh-out-loud moment comes when the police captain theorizes, “My God, with a wingspan like you’re talking about here that thing could fly miles into New York City every day. And it would do that, of course, because New York is famous for good eating.”

Larry Cohen is also to be credited for his visual storytelling skills. The movie was filmed on location in New York City, even inside the actual Chrylser Building cone, and the locations were photographed with a great attention to visual impact. Believe it or not, the crude stop motion creature and giant rubber claws become more believable thanks to the attention to detail given tot he photography.

The film’s strength’s are definitely in the visuals, the actors didn’t make a huge impact on me. Apparently when the film was released, film critics like Roger Ebert and Rex Reed praised the performance of Michael Moriarty as being far better than what would be expected for this type of material. To be honest, I found Moriarty to be the weakest element in the cast. His performance feels over-the-top to me…but hey, who am I to argue with Ebert and Reed?!

“Q” is an enjoyable schlockfest, but maybe a bit to gory for some viewers. Next watch out for “R-the Rat that ate Manhattan!”