In the 50’s and 60’s, sword and sandal epics ruled the Italian movie scene and one of the biggest characters in that genre was, of course, Hercules.  Tons of popular Italian Hercules movies were made, so it makes sense that every so often there is an attempt to bring the character back to the screen.  In 1983, Italian director Luigi Cozzi teamed up with the Incredible Hulk himself, Lou Ferrigno, for a new take on the character,with a bit of a sci-fi twist, simply called “Hercules.”

I’m going to do my best to sum up this plot, but honestly, I was lost through half of this thing.  It begins with Zeus, hanging out in outer space, deciding to give massive amounts of power and strength to one human.  He chooses baby Hercules, son of a king.  Unfortunately, the evil King Minos (William Berger) and his voluptuous daughter Ariadne (Sybil Danning) kill Hercules’ parents and steals a magic sword.  But a nursemaid escapes with the baby and sends him down the river in a boat.  After the baby battles a sea monster and is rescued from a waterfall by the giant hand of Zeus, he is found, George and Martha Kent style, by a kindly peasant couple.As the years go on, Herc grows big and strong.  The evil king continues to cause problems for Hercules, even sending a giant mechanical bug to battle him one day. Eventually, mom and pop die…the father’s death scene is actually one of my favorite scenes in the film.  He’s killed by a bear which enrages Hercules so much that he hurls the animal into space, creating the Great Bear constellation.  In case you hadn’t figured it out, my love for this scene is based purely on comedic value.

Hercules then heads off to a city that is searching champion.  After various tests, he wins the right to guard the princess Cassiopea (Ingrid Anderson), and the two end up falling in love.  But Cassiopea is soon kidnapped by King Minos.  So Herc heads out to find her, teaming up with a crusty old sorceress who turns into a supermodel with a sprayed on costume (Mirella D’Angelo) after she drinks 10 drops of Hercules’ blood.  Along the way, Hercules battles more mechanical monsters, grows into a giant, and pulls a glowing talisman out of a glowing egg.  And let me just say…not since “Citizen Kane” has a there been a film…alright, I can tell you’re not buying it already. 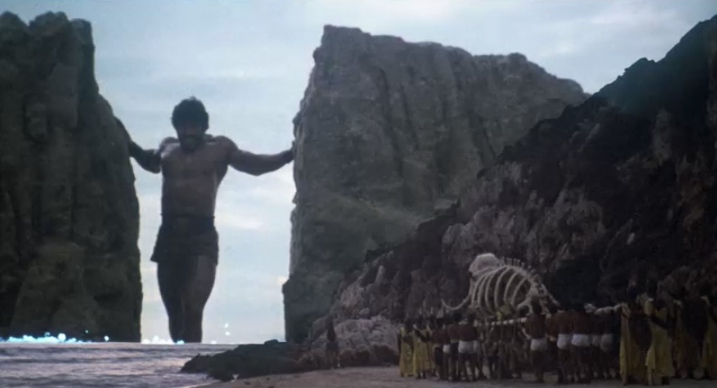 It is almost indescribable how bad this movie is.  I’ve got nothing against sword and sandal flicks…I even understand why they made this one.  I mean, with the success “Conan the Barbarian” in 82, it makes sense that someone would turn to Hercules.  But the bizarre thing is that they decided to give parts of the film a sci-fi feel…no doubt a response to the “Star Wars” craze that had swept the world a few years before.  So instead of ending up with a Ray Haryhausen style hydra, we get a mechanical one that looks like it was built out of someone’s Erector Set.  King Minos even has a lightsaber-ish weapon he uses to battle Hercules in the film’s final battle.

It’s an overused phrase, but this movie falls into the “so bad it’s good” category.  I mean, some films are just plain bad (anyone for a screening of Robert Altman’s “Pret-a-Porter?”  No?  Didn’t think so)…but this movie is fun.  Cinematic abomination perhaps, but fun none the less.