Everyone knows that Linda Blair played the girl who was possessed in “The Exorcist.”  She managed to move past the whole pea soup thing and become quite a teenage dreamgirl for many young men in the 70’s.  She also ended up starring in many more horror films, but there was the occasional departure.  In 1979, looking to move away from being cast in horror films all the time, Blair allowed herself to be possessed by a different kind of spirit.  The spirit of boogie!  “Roller Boogie”…that is!

Blair plays rich girl Terry Barkley.  She’s got a big house, fancy car, parents who don’t pay attention to her, and a scholarship to play flute at the Juilliard School in New York…but what she really wants to do is skate.  She spends most of her days sneaking away to Venice Beach where just about everyone has eight wheels strapped to their feet.  Down at the beach, the king of the skaters is Bobby James (Jim Bray) who dreams of going to the Olympics.  Exactly what event he plans on competing in is unclear…since to my knowledge, Roller Figure Skating wasn’t an Olympic event in 1979…nor is it today.

After spotting Terry at the beach, Bobby is determined to get close to her.  That night at Jammer’s, the local rink, he manages to skate with her.  She plays hard to get and ends up offering to pay him to teach her to skate dance so she can enter the upcoming roller boogie contest.  He agrees and despite their very different backgrounds, romance begins to blossom…aw.

But, trouble is on the way.  It seems a gangster-type businessman (Mark Goodard…yep from “Lost in Space”) is out to snatch up the land that Jammer’s is on so he can build a shopping mall.  At first Jammer (Sean McClory) refuses…but these thugs threaten to torch the place.  Fearing for the safety of the kids, Jammer reluctantly takes the deal.  However, thanks to Bobby’s pal Phones (Stoney Jackson), who is always carrying his tape recorder, the gang ends up with a recording of Jammer being threatened.  Now the chase is on to stop the thugs and save the Roller Boogie contest!

I know…I know…it sounds absolutely horrible, doesn’t it?  Well I’m as surprised as anyone that I’m about to type this: I had fun with “Roller Boogie.”  The plot is silly, but the movie is a great look at the roller disco fad.  The skating sequences are very impressive.  The roller disco scenes are a lot of fun, the opening credits featuring a lot of fancy footwork around Venice is also cool, but the highlight of the scenes-on-wheels is a chase through a skate park…in the days before they were filled with skateboarders.

Leading man Jim Bray was an actual competitive roller skater, so that helped up the ante with the skating scenes.  Supposedly, an actor who was dating Linda Blair was originally supposed to play the part, with Bray doing the stunt work.  But when the relationship went sour, Blair’s ex was out and Bray was cast.  That is…after some acting lessons.  Sad to say, they didn’t help him much.  This was his only film and, God bless him, the boy tries but he just wasn’t cut out for acting.  But the skating…awesome.  High marks all around!  As for Blair, you gotta give her a lot of credit, her skating is pretty impressive as well.  A double was used for some more complicated scenes, but for the most part, it is clearly her doing the skating. 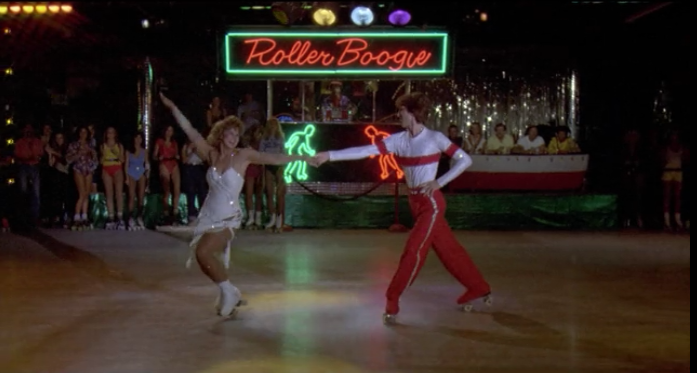 Of course, one of the things that makes this movie so fun to watch today is experiencing the fads and styles of 1979.  The short shorts, the feathery hair, the gold chains, the headphones the size of a satellite dish…priceless!  If you’re a young one, you’ll get a kick out of it.  If you were there, you’ll love reliving it.  I was there, but I was only 8.  The music is a great time capsule as well.  There are a few hits featured…Earth, Wind & Fire’s “Boogie Wonderland” and Cher’s moderate hit “Hell on Wheels” are standouts.  But even the other lesser known tracks that made up the film’s two-disc soundtrack are great ambassadors of disco.

Now that I’ve heaped all sorts of praise on “Roller Boogie” let me make it clear…this is not a great movie by any stretch of the imagination.  We’re in guilty pleasure territory here campers.  If you’re a cinephile who just can’t bring yourself to watch something called “Roller Boogie,” then exorcise those demons and just sit back for some goofy 70’s fun-on-wheels.