Ahh, disaster movies.  One of the staples of a 70’s movie diet.  All-star casts screaming and running from at times awesome at times horrible special effects.  It must say something about how sick the human mind really is that we actually enjoy watching this much death and destruction.  Our movie today, predates the 70’s flood of disaster flicks by a few years.  Though it doesn’t have the chock full of celebrities cast, one could see the 1965 film “Crack in the World” as being an early example of the disaster genre. 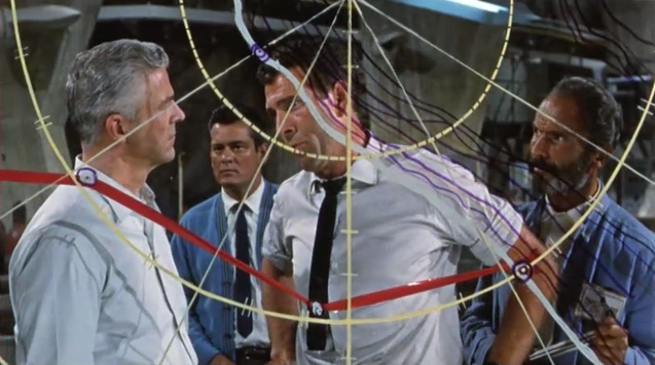 The film centers around a group of scientists working in an underground facility in Africa.  Dr. Stephen Sorensen (Dana Andrews) is the leader of this brain trust, which he has assembled from all corners of the globe.  His much younger (and former student of his) wife, Maggie (Janette Scott), is also a part of the team.  When we first meet them, the facility is all a buzz due to the visit of some government officials.  Sorensen explains to them that they are trying to bring magma from the earth’s core to the surface so it can be tapped as an inexhaustible energy source.  Problem is, the team has reached the final layer, separating them from the core, but can not break through.  So, they are seeking permission to use a nuclear weapon to break through the final layer.  Sorenson believes that the warhead will harmlessly burn through the unbreakable layer.

Conveniently absent from the facility at the time of the meeting, thanks to Sorensen, is his young associate, and Maggie’s former lover, Ted Rampion (Kieron Moore).  Rampion does not share Sorenson’s opinion about what effect the warhead will have.  With his modestly named “Rampion Theory,” he believe that the atomic weapon will shatter the layer surrounding the core, which will bring about the eventual destruction of the Earth.

Do you really need me to tell you what happens?  I’ll do it anyway.  Sorenson ends up getting his way, despite Rampion’s attempts to shut him down.  Of course, the warhead does cause a “Crack in the World,” which begins to make it’s way across the ocean floor.  Soon, small islands are experiencing devastating earthquakes with huge loss of life.  Now it’s up to the scientists to stop this before the entire world splits in two.  However, Sorenson soon finds it difficult to work on the solution as a cancer-like skin disease he has hidden from his wife is quickly spreading across his body. 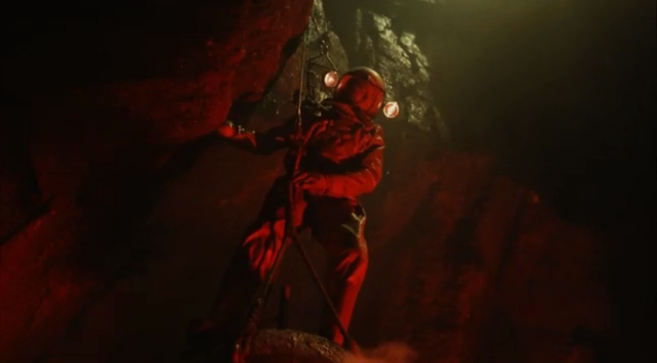 “Crack in the World” represents an interesting middle ground between the sci-fi movies of the 50’s and the disaster flicks of the 70’s.  A major component of the story is the atomic-age arrogance that was often seen as a plot device in the 50’s.  It’s our use of atomic weapons that brought about various mutant monsters…space aliens concerned with our dangerous progress…heck, even Godzilla!  So, here we are bringing about our own destruction again by breaking our own planet apart with a nuke.

The story has an interesting premise, and the setup had me anticipating some big time on-screen destruction.  Unfortunately, there are some missed opportunities.  When the destruction begins, we don’t get to experience any of it.  Our heroes spend most of their time tucked away in their underground lab…so when earthquakes start to strike, we hear about it as they do, via a TV broadcast, employing a bunch of stock footage.  The opportunity for a bunch of dramatic disaster footage is wasted.  Perhaps it was due to limited resources, since there is some exciting footage involving miniatures, flames, falling rocks…all the elements of a disaster movie…but it’s saved for the film’s finale. 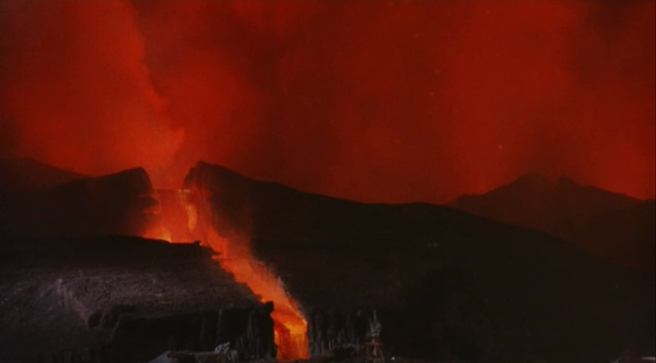 I guess “Crack in the World” had all the right elements, and it is an enjoyable film, but it just doesn’t go quite far enough.  Sorenson’s disease plays a part in the story, but it’s never really explained.  I kept wanting it to be a result of some of his experiments.  The love triangle works to some degree, but could’ve brought so much more tension.  Why not have Sorenson be so consumed with jealousy that he sabotage’s Rampion’s equipment when he’s dangling over that pit of flaming hot magma…instead Sorenson is stuck back in the lab.

The film ends well, and I think that leaves the viewer feeling somewhat satisfied with the experience.  But as you go back and think about it, you realize what was lacking.  It’s still a fun film, though…if you consider the destruction of the Earth fun, that is.