I’m not really a big fan of the current 3-D craze. It’s not that I have anything against 3-D, but I have bad eyes…worn glasses since I was 3 years old. There’s something about the new 3-D technology that just doesn’t jive well with my peepers. The screen ends up looking really dark to me. Plus, I have poor depth perception…I can’t see the sailboat in those Magic Eye things…so the effects just don’t work as well for me. Today’s movie, is one of the few movies that tried to utilize 3-D in the 80’s. I suppose you could make the case that it was movies like this one that killed 3-D. Prepare yourself for 1983’s “Metalstorm: The Destruction of Jared-Syn.” 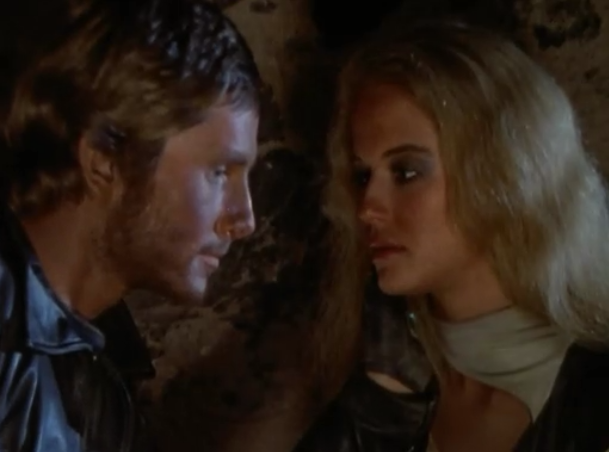 The film centers on a Mad Max-ish wanderer called Dogen (Jeffery Byron). He’s out to get a nasty guy called Jared-Syn (Michael Preston) who’s harassing the poor folk trying to make their way by mining crystals. After battling some of Jared-Syn’s forces, Dogen encounters a girl named Dhyana (Kelly Preston) who’s father was a prospector murdered by Syn’s part cyborg son, Baal. His weapon of choice sprays green Nickelodeon style slime onto the victim, which then sends them into some weird acid trip where Jared-Syn uses a crystal to suck the lifeforce out of them.  A laser gun would probably work just as well, but hey, whatever floats your boat! 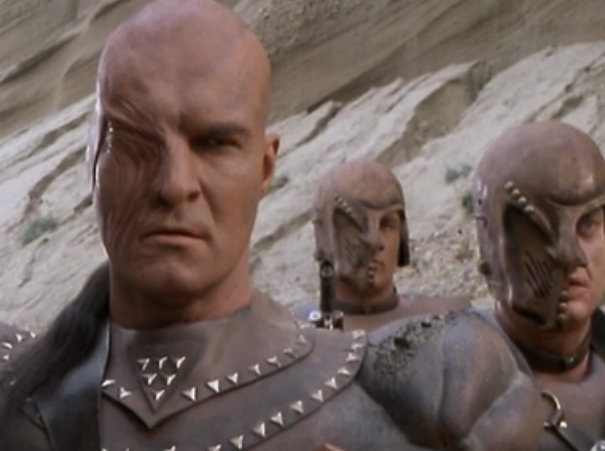 So, now Dogen and Dhyana set out to defeat Jared-Syn…but things get really weird and confusing. There’s something about having to locate a magical mask that belonged to the ancient Cyclopians. Then Dogen gets slimed and, while he’s in his little dream world, Dhyana gets kidnapped by Syn’s forces. Enter Rhodes (Tim Thomerson), a Han Solo-ish outlaw who signs on to take Dogen into Cyclopian territory. Along the way, they manage to befriend the one-eyed leader of the Cyclopians, Hurok (Richard Moll). All of this leading up to a final battle to save the girl and defeat Jared-Syn.

I admit, I really couldn’t follow the story very well. There are chases, there are battles, the heroes look for stuff, lots of things fly right into the camera…but none of it seems to be connected to each other. We know the goal of the movie is to destroy Jared-Syn…I mean it says so in the title, but why exactly? He’s a villain that never really has the chance to be villainous. If having freakishly huge eyebrows makes a bad guy scary, Jared-Syn’s got it made. But in our universe, he’s about as terrifying as Thomas the Tank Engine. 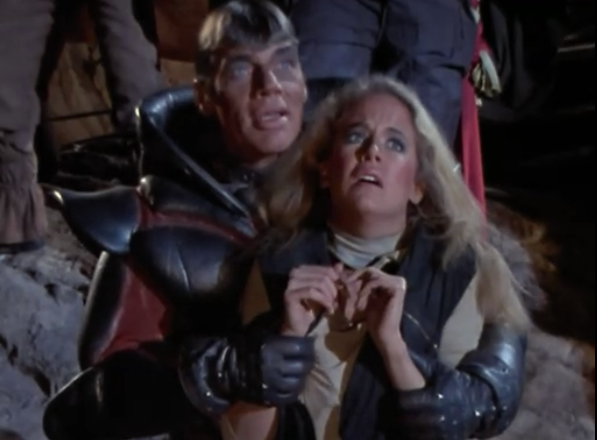 However, there’s still some fun to be had with the scenes that were made with 3-D in mind. Director Charles Band goes out of his way to make sure lots of stuff is thrown right at the screen. Even a cyborg’s mechanical arm is ripped out of it’s socket and flung right at our faces in slow motion. Ever see the “Doctor Tongue’s 3-D Theater” skits on the old “SCTV” show? This is eerily close to that.

I think the idea here was to mix “Star Wars” with “The Road Warrior” and throw in some of the elements of the 80’s sword and sorcery flicks like “Conan the Barbarian.” Sounds like a knockout formula, right? Didn’t think so. Of course, the most frustrating aspect of the film…spoiler alert here (if it matters to ya)…is that the title lies to us! Jared-Syn gets away! Setting up the sequel that never came. “Jared-Syn Strikes Back” perhaps? Who knows, now that 3-D is back again!