You know what they say, “all good things must come to an end.”  In 1980, such was the case for American International Pictures.  They had brought so much B-movie goodness to the screen.  The Frankie and Annette beach party flicks…that was AIP.  Roger Corman’s Edgar Allen Poe films…AIP again.  Today’s film is the last film released by AIP.  It’s an obvious attempt to cash in on the success of films like “Animal House” and, most blatantly, “Meatballs,” 1980’s “Gorp.”

The word “gorp” is another name for trail mix.  I guess it stands for “Good Ole Raisins and Peanuts.”  Though the name is never used in this film, this type of snack is standard issue at summer camps such as the one where this film takes place.  Welcome to Camp Oskemo, a summer camp run by Mr. Wallman, aka The Walrus (David Huddleston…the Big Lebowski himself).  The film primarily focuses on the staff of college-aged waiters who work at the camp.  They are led by Kavell (Michael Lembeck…son of Harvey “Eric Von Zipper” Lembeck) and Bergman (Philip Casnoff).  Also on hand is the gun crazy Mad Grossman (Dennis Quaid).  Along with their gang of other odd characters, these guys work the mess hall during the day and chase female counselors at night.

The film consists mostly of strange vignettes showing the weird ways these guys entertain themselves throughout the summer.  They stage a kitchen hockey tournament using mops for sticks and, what appears to be, a burnt piece of SPAM as puck.  They also conduct a kitchen olympics at one point.

During much of the summer, Kavell and Bergman butt heads with each other as they both pursue the pretty new counselor Vicki (Lisa Shure).  She has made it clear to them that she does not go all the way, however, her friend Evie (Fran Drescher) makes it clear that she does and manages some, shall we say “time alone” with both guys at various times.  Another one of the female counselors is Judy (Rosanna Arquette in her first role), a wealthy Jewish girl who hooks up with a Puerto Rican member of the kitchen staff…much to the chagrin of her parents.

Meanwhile, as the summer progresses, Kavell and Bergman continue to cause trouble for the Walrus.  Some of their pranks include herding a bunch of barnyard animals into the Walrus’ room in the middle of the night and screening a pornographic film during a visit by parents and potential financial donors.  Trouble is also brewing at the shack where the waiters stay as the annual war between those who live upstairs and those who live downstairs begins with a heavily-armed Grossman leading the charge.

The influence of films like “Animal House” and “Meatballs” is very obvious here.  Make no bones about it, AIP never shied away from copying a formula that worked.  Problem is, they didn’t quite get the formula right.  Part of what made those films work were clever, funny, well-defined characters.  In “Gorp” there are hints of that, but the characters just aren’t developed enough.  Kavell and Bergman might as well be the same character, there is nothing that distinguishes one from the other.  Quaid’s military-minded Grossman is a wee bit more interesting, but the same character was pulled off much more successfully as Tackleberry in “Police Academy” several years later.  There are other weird waiters on the staff that just are never given the chance to develop.  There’s the geek, the chubby guy, one even dresses as Dracula all the time.  Good luck remembering any of their names, though, as none of them really contribute anything to the story. 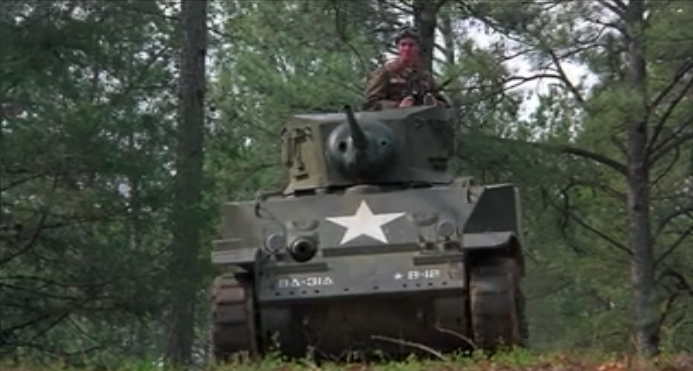 There were a few enjoyable aspects of the film, though.  The final “war” between the two factions of the kitchen staff that breaks out at the end of the film is a fun gimmick.  As the battle rages on, Grossman somehow ends up driving into the battle on a tank.  My first thought was, “where did he get this thing?”  But, I actually found myself willing to roll with it and found myself wishing that the whole film had taken this same outlandish approach to the comedy.

You know what was AIP’s second to last film?  They were the American distributor for “Mad Max.”  Now THAT would’ve been a good finish.  Sadly, “Gorp” is not a fitting finale to the wonderfully diverse filmography of American International Pictures.