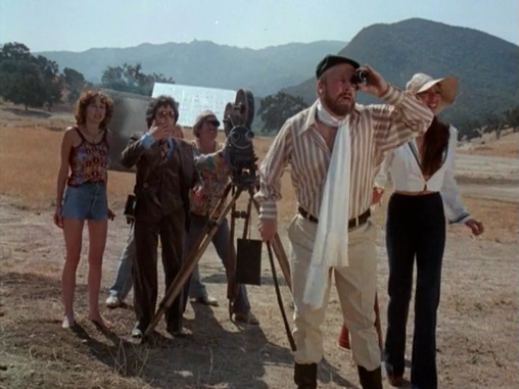 Make no mistake, film is an amazing art form.  Making a movie is an amazing process and film fans can spend days discussing the thousands of different artistic disciplines that come together to create just one movie.  But we won’t be having that sort of discussion today, loyal readers.  For today’s movie was made on a bet!  Producer Jon Davison bet the one and only Roger Corman that he could create the cheapest movie in the history of Corman’s New World Pictures.  Corman gave Davison a budget of $60,000 and a 10 day shooting schedule (as opposed to the normal 15).  Not a problem though, since the plan involved creating much of the film using footage from other films Corman’s studio already owned.  Joe Dante and Allan Arkush, who had been employed editing trailers for Corman, were recruited to direct the new footage.  The end result was 1976’s “Hollywood Boulevard.”

The film opens on the set of a movie being made by Miracle Pictures (If it’s a good picture, it’s a miracle).  The crew (3 people) is filming a sky diving sequence (lifted from “Night Call Nurses”) when trouble strikes.  One of the young stunt girls’ parachute doesn’t open and she plummets to her death.  The director, Eric Von Leppe (Paul Bartel), and the producer, P.G. (Richard Doran), are saddened but relieved they got their shot.  Now they must find a new stunt girl.

Enter Candy Wednesday (Candice Rialson), a young wannabe actress, fresh off the bus.  She manages to get an agent, Walter Paisley (Dick Miller…using the same name as his character from Corman’s “A Bucket of Blood.”), who quickly lands her the stunt girl gig at Miracle Pictures.Candy fits right in with the Miracle Pictures gang, including fellow aspiring starlettes Jill (Tara Strohmeier), who’s been sleeping with P.G., and former roller derby skater Bobbi (Rita George).  But she especially hits it off with resident screenwriter Pat (Jeffery Kramer).  The only one who doesn’t seem to be thrilled with the new girl is Miracle’s top leading lady Mary (Mary Woronov). 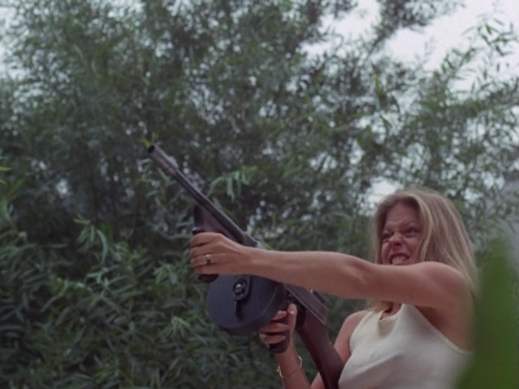 After impressing the crew with her stunt work, Candy is signed up, along with the other three women, to head to the Philipines to shoot “Machete Maidens of Mora Tau.”  The production is actually pretty big (courtesy of borrowed footage from “The Big Bird Cage”).  However, tragedy strikes again when Jill ends up taking an actual bullet to the gut.But, despite the rising body count at Miracle Pictures, the show must go on.  Candy’s star is on the rise, but at the Machete Maidens premiere (at a drive-in) she begins to see how bad the films she’s making are.  To be blunt, she’s disgusted.  Still, she agrees to appear in another film, a proposed 1950’s period-piece.  By the time the film actually goes into production, it has morphed into a futuristic film set in 2050…with borrowed footage from “Death Race 2000.”  Unfortunately, a knife-wielding figure is out to kill Candy.  Will she survive?  And more importantly, with the film be finished? 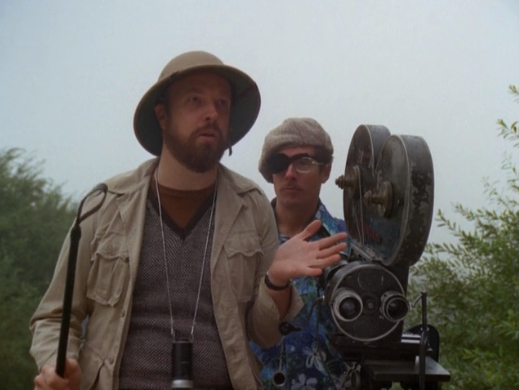 “Hollywood Boulevard” is a tough movie to review.  The story of how it came to be is interesting and gives reason enough to want to experience this film.  But the end result is a bit uneven.  There were many moments where I thought, “this is is really funny!”  But there were just as many where I thought, “this is soooooo bad.”
Three of the supporting players come through as the strongest elements of the film.  Paul Bartel is very funny as the talentless director, as is Dick Miller as the fast-talking agent.  But I think my favorite performance in the film is from Mary Woronov as evil leading lady Mary McQueen.  Woronov would later go on to play another great villain for Allan Arkush, the Nurse Ratchett-esque Principal Togar in “Rock ‘N’ Roll High School.”  In that one she was just plain nasty, but here she pulls off evil but sexy.  And…Spoiler Alert here…her character’s demise may be one of the greatest death scenes in movie history!  These three performances really carry the film.  Good thing too, since leading lady Candice Rialson just doesn’t manage to make Candy all that interesting a character.  I realize that this is a movie that was shot in 10 days and pieced together with footage from other movies, but creating a compelling lead character still should’ve been a priority.
There is a lot of fun to be had with this film, though.  Film fans will enjoy trying to pick out which scenes are plucked from other films.  It’s also funny to note the other ways that the final film was beefed up.  For example, the scene where Candice, Pat and Walter drive to the premiere is ridiculously long with endless shots of signs on LA freeways.  A strange musical sequence featuring Commander Cody and His Lost Planet Airmen also adds a few minutes to the running time.

I don’t know that anyone could make the case that “Hollywood Boulevard” was “skillfully executed.”  In fact, there are some sequences that are downright cringeworthy.  Both Dante and Arkush were still a few years from hitting their stride as directors (Dante with “Piranha” and Arkush with “Rock ‘N’ Roll High School.”), so it’s not surprising that there are moments in this film where they fail to…shall we say, put on the brakes.  Still, the film does succeed on a certain level because it’s a spoof of exploitation films that is, itself, an exploitation film.