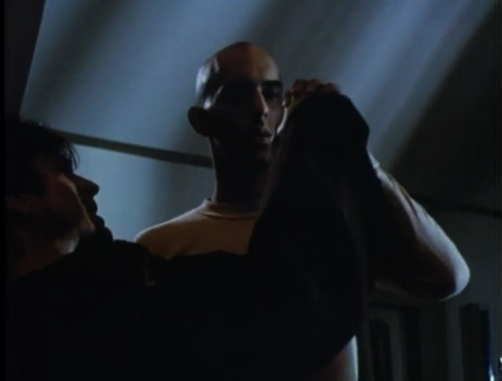 Klaus Kinski is an interesting figure in film history.  Of course, I never knew the man, but there is more than enough evidence out there to support the claim that he was possibly one of the most unpleasant people to ever walk the face of the earth.  Still, there’s no denying his talent as an actor in films like “Aguire: The Wrath of God.”  Then again, he also supposedly turned down a role in “Raiders of the Lost Ark,” calling the script “mornically sh***y.”  Instead, he chose to appear in this film from Roger Corman’s New World Pictures…one of the many that came in the sci-fi wake of “Star Wars,” 1982’s “Android.” 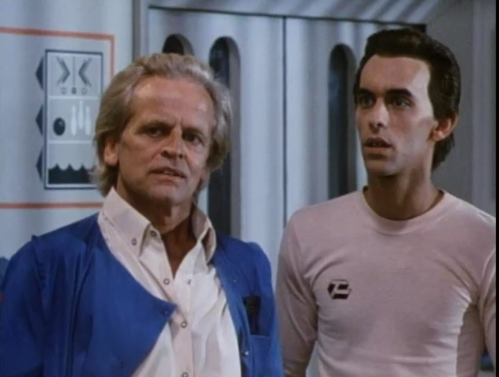 The film takes place on a space station where Dr. Daniel (Kinski) conducts his research away from the rest of the world.  He is assisted by an awkward young man named Max.  The name of the actor playing Max is not listed in the opening credits.  “And Introducing MAX 404” is all it says.  That’s our first indication that Max (actually played by Don Keith Opper) is the titular android.

One day, Max picks up an emergency call from a ship, which he allows to dock on the station.  On board are three passengers Keller (Norbert Weisser), Mendes (Crofton Hardester) and Maggie (Bire Howard).  Unknown to Max, they are escaped prisoners. 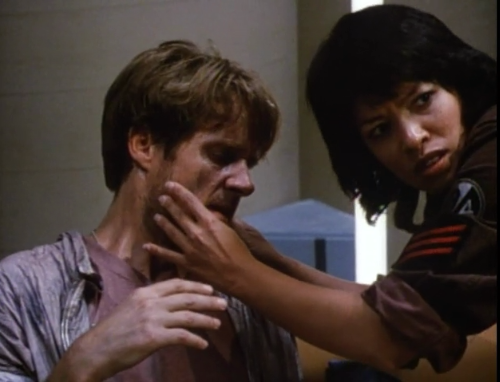 Max ends up taking an immediate liking to Maggie.  She has no idea he’s an android, though Keller begins to suspect it.  When the doctor learns that he now has guests on the station, he is upset at first.  He starts to ask them to leave, but when he spots Maggie, his attitude changes.  Instead, he has Max invite Maggie to join him for lunch.  It turns out that the doctor is building another android, a female one, and he needs Maggie to somehow help him complete the project.  Maggie, of course, is not thrilled with the idea.

Later that night, Maggie asks Max to show her the android, Cassandra (Kendra Kirchner).  While in the doctor’s lab, Max and Maggie begin to become intimate with each other.  Somehow, the sexual energy these two put off causes Cassandra to awaken.  This is when Maggie realizes Max is an android.  When she returns to her quarters, she is greeted by the jealous Mendes.  He starts slapping Maggie around, the next time we see her she’s dead.  Max soon finds out and the doctor reprograms him to exact revenge on Mendes.  But who is really behind all this? 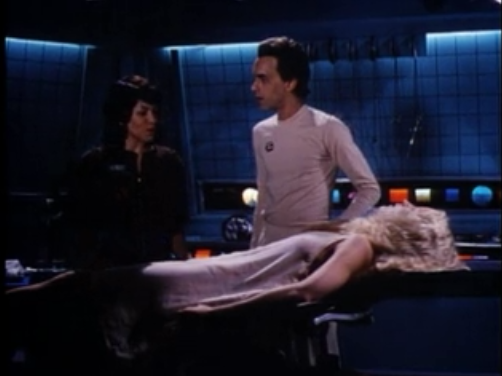 “Android” is a low-budget production, and it shows.  However, the story is actually somewhat decent.  It could be seen as a futuristic spin on “The Bride of Frankenstein.”  Don Keith Opper is pretty convincing as Max and his interactions with Kendra Krichner’s Cassandra toward the end of the film definitely bring to mind the image of Karloff alongside Ilsa Lanchester.

It’s understandable why Kinski was cast as the doctor.  I suppose if anyone one was born to play a mad scientist it was him.  But considering how unhinged Kinski himself was, it’s a bit unfortunate that he’s so restrained here.  We’re really not given any reason to fear his character.  Had someone thrown his crazy switch this film may have taken an interesting turn. 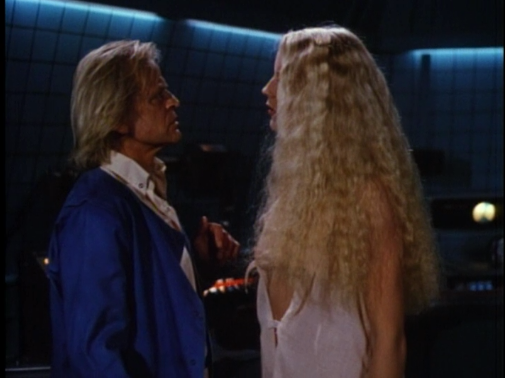 This is a hard movie to nail down.  It is kind of cheesy.  It’s got cheap sets, cheap special effects, and takes every opportunity to show a fleeting glimpse of the two leading ladies’ breasts…yet somehow it managed a PG rating.  But on the other hand, the story is intelligent and intriguing and offers a creative twist at the end.  It’s no masterpiece, but it’s worth a look.  Hey Kinski said “no” to Spielberg to make this thing, after all!