Our next entry in the Forgotten Disney series covers a fan favorite among many Disney geeks… 1964’s “Dr. Syn, Alias the Scarecrow.”  Our guest reviewer is one of the contributors to the awesome Retroist site, Vic Sage. 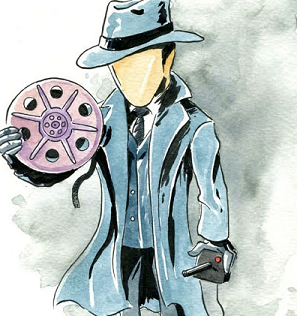 Vic (depicted above by artist Christopher Tupa) used to have a personal blog called ‘In My Youth, Victory Was A Power Pellet’.  He started it just to not clutter his friends inboxes with ramblings about classic gaming and films…and monkeys.  Then, to his surprise, he found there were actually like-minded individuals who were kind enough to visit the site.  Then one day he was asked by the Retroist himself to come write for one of the most awesome sites on the internet. His favorite film is “The Adventures of Buckaroo Banzai Across the 8th Dimension.”

The moon is full as a figure in a billowing black cloak and a mask to hide his true identity willingly rides into danger to save the people of his city. His appearance crafted to the last-minute detail to strike terror into the hearts of his foes and if that is not enough he can count on the few weapons he carries on his belt or his mockingly high-pitched laugh. A laugh that freezes the blood of the guilty and cruel hearted.

Is this some strange version of Batman? No. Possibly the famous Pulp character from the Street and Smith Publications, the Shadow? No again. Though Walt Disney’s ‘Dr. Syn: The Scarecrow of Romney Marsh’ certainly shares elements from both of those characters. Or in truth we should say that those characters share some traits of Russell Thorndike’s famous literary creation back in 1915.

Filmed as a three-part television color miniseries by the Walt Disney Studios in 1963, the first audiences to see the legendary Patrick McGoohan (Danger Man, The Prisoner) as both Dr. Syn and his alter-ego the Scarecrow were UK audiences. The Three-parter was edited, trimming away almost an hour of footage from the television version, and was packaged with the theatrical run of “The Sword in the Stone.” It wasn’t until 1964 that American audiences got their chance to become enraptured by the Scarecrow of Romney Marsh and those that missed it were able to become acquainted with the film version that was once again edited and released in 1970 with “Snow White and the Seven Dwarfs.”

I’m focusing on the theatrical version of the film for the sake of this review and while obviously the three-parter expands the story, the editors for the theatrical run really did a fantastic job of pruning away the excess without hurting the narrative.

As the movie begins we are introduced to the Scarecrow through a montage sequence which is married with the fantastic and memorable theme song crafted by the legendary folkist Terry Gilkyson. Interestingly enough in the theatrical version the maniacal laugh of the Scarecrow is removed from the song.

Here is a brief excerpt from it:

The Soldiers of the King feared his name

On the Southern Coast of England

Of Days long ago

When the great Scarecrow

Would ride from the jaws of Hell

With a fiendish yell!”

A little darker perhaps than your typical Disney fare, no? Through the full theme song we also get the gist of the character of the Scarecrow,  the lyrics explain that he helps those who are being oppressed by the soldiers of the King of England by making sure they have gold to pay their taxes and confounding the Crown and its agents in general. What we take away the most from the lyrics and images is that the Scarecrow of Romney Marsh is a frightening character to say the least.

As the film begins proper it is night and we see the Scarecrow arrive on horseback with two other masked compatriots to oversee a smuggling operation in process on a beach. We find that these smugglers are mostly made up of the Scarecrow’s men and they not only respect but fear their leader. Well most of them do, as we are introduced to one of his followers who has a dissident view, a man we will later learn in the film is named Joseph Ransley (Patrick Wymark).

The Scarecrow has two right-hand men with him most of the film,  these masked men are known as The Curlew and Hellspite. Considering this was filmed for 60s television I have to say that the masks they wear are pretty frightening indeed, especially the Curlew which is a feathered mask…that looks more like an Owl than the actual bird he is named after.

A lookout spots activity from the nearby English garrison and warns the Scarecrow they are about to have company, to buy the other smugglers time to remove their wares off the beach the Scarecrow, Curlew, and Hellspite lead the soldiers of King George on a merry chase.

After finding refuge in a barn and giving the soldiers the slip, we are introduced to the true identity of the Scarecrow who we already know is, of course, Dr. Syn, the gentle Vicar of Dymchurch. Hellspite is in truth, Sexton Mipps and The Curlew is revealed to be young John Banks, the youngest son, we will soon learn, of the gentlemanly Squire Thomas Banks (Michael Hordern).

The next scene introduces a Lord riding in his carriage as well as the man who will become the Scarecrow’s main antagonist, General Pugh (Geoffrey Keen) as they ride to Squire Banks’ manor. In the carriage opposite of the two we see two more occupants, a man who appears to be down on his luck sleeping, he has been given a ride by the Lord, and Pugh doesn’t hesitate to describe as riff raff. The other man is also an Officer in his King’s Army, Lt. Philip Brackenbury (Eric Flynn). Through their conversation we learn that Pugh is carrying orders in his satchel on how they are to bring about the end of the smuggling ring that is operating in the marshes around Dymchurch. The carriage is then halted by a band of the King’s soldiers who are looking for an escaped prisoner, an American charged with treason for speaking out against the King who was going to be hanged in the morning before he managed to escape. Obviously everyone in the carriage starts to look at the sleeping man who darts forward, snatching the orders from Pugh and makes his escape into the marshes, though not before getting wounded in the attempt.

Now, while in the three-part miniseries we learn how he makes his way weak and weary to Dr. Syn’s home, in the theatrical version he appears at the Vicars window with a quick explanation that ‘Mother Hathaway’ sent him…which is enough to move the story onward and really doesn’t distract from the narrative. We learn that this American is named, Simon Bates (Tony Britton), who requests sanctuary from Dr. Syn. The Vicar, however, says he cannot grant this request but will send him with Sexton Mipps where he will be hid until the coast is clear. Bates gives him the stolen orders in the hopes that Dr. Syn can somehow get them into the hands of the Scarecrow. As Mipps and Bates leave, Syn wastes no time in reading the orders contained in the stolen satchel, it is revealed: 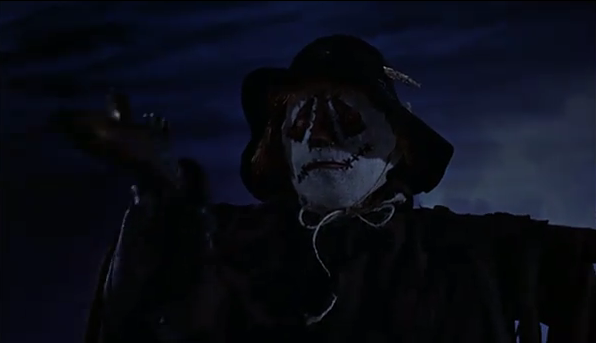 In the next scene we find General Pugh giving a talking down to Squire Thomas Banks in regards to his abilities as Justice of the Peace since the smugglers haven’t been caught and he has been called in to take care of the situation. In attendance are Dr. Syn and Lt. Brackenbury and we are introduced to the Squire’s daughter, Katharine Banks (Jill Curzon), who along with her younger brother John, as well as the Squire, are less than happy about the situation that Pugh is describing. He plans on using press gangs to induct the men of Romney Marsh into the Royal Navy as well as stooping to bullying the womenfolk of the marshlands until someone turns over the Scarecrow. This talk of rough treatment and especially the press gangs sends the Squire into something of a rage and he storms out of the room. General Pugh is actually quite shocked and doesn’t understand what he might have said to elicit such a reaction, it is here we learn that Katharine and John’s older brother was press ganged four years earlier and has not been heard from since. Pugh apologizes but explains he is merely following orders and in this scene we see that Lt. Brackenbury is not remotely cut from the same cloth as his commanding officer and that Katharine has caught his eye. General Pugh informs them all that the men of the marsh have brought this rough treatment on themselves and they will receive it.

In the very next scene we see the General is true to his word, not only employing the Press Gangs but burning down the cottages of the people of the marsh as well!

Squire Banks is less than thrilled by this news and confronts the General, to which Pugh offers a better way to catch the Scarecrow. The Squire is to look over his records and see who was behind in their taxes and then had suddenly paid them in full. The Squire knows of such a man and agrees to bring him to the General if he will swear to stop the strong-arm tactics. This is where that dissident voice of Joseph Ransley comes to cause trouble for his fellow smugglers and the Scarecrow of Romney Marsh.

I’ll stop with the spoilers here because what occurs is too good to ruin, I hope I’ve given just enough to make you hungry to seek out the film or better yet the three-part miniseries. What I have described is barely the first half of the movie, so prepare yourself for something special. The acting in this production really is top-notch, and with McGoohan as the main star why would it not be? The type of  storytelling adventure evident in Dr. Syn is sadly largely forgotten nowadays in our modern films but do yourself a favor and seek it out.