Over the last 20+ years, Traci Lords has become a very recognizable actress in B-movies, and even some more notable efforts. Many don’t even recall that she was once a performer in pornographic films…let alone the controversy that arose in the late 80’s when it was discovered that she was underaged at the time. Today’s film marks her first appearance in a mainstream film…if you can give that label to a film produced by Roger Corman and directed by Jim Wynorski. It’s a remake of a 1957 film directed by Corman. Legend has it that Wynorski bet that he could remake that film with the same budget, adjusted for inflation, of course. It’s 1988’s “Not of This Earth.”

The story concerns a strange man who wears dark sunglasses, day and night, and goes by the name of Mr. Johnson (Arthur Roberts). One day, he visits the office of Dr. Rochelle (Ace Mask) and his lovely nurse Nadine (Lords). Johnson demands a blood transfusion, but refuses to allow the doctor to do any tests first. Dr. Rochelle, of course, refuses at first, but using a form of telepathy, Johnson gets the doctor to change his mind. Not only that, he assigns Nadine to take up residence at Johnson’s mansion so she can administer the blood on a daily basis.

When she arrives, she meets Johnson’s driver, and all around lackey, Jeremy (Lenny Juliano). Jeremy has had some run-ins with the law over the years and is immediately recognized by Nadine’s cop boyfriend, Harry (Roger Lodge). Nadine really doesn’t have all that much to do at Johnson’s place. I mean, once she’s given him his blood for the day, she’s free to take showers, swim in the pool, and sunbathe. Johnson, on the other hand, spends his free time picking up hookers with Jeremy. He then brings them back to the cellar, zaps them with his glowing eyes, and then drains their blood with a device I think should be called the “pocket vampire.” 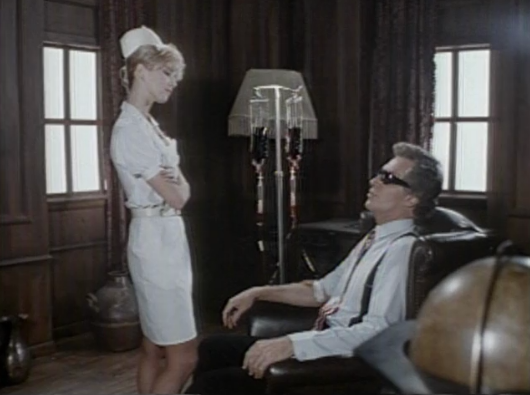 Nadine soon begins to suspect that there is something up. She even snoops around in the cellar which has been declared off-limits to her and Jeremy. Unknown to them, Johnson is an alien seeking a planet that can supply blood to his dying world. He is soon joined by his scantily-clad alien lover. Together they sneak into Dr. Rochelle’s office to steal more blood. But when she ends up drinking some blood that is infected with rabies, she turns into a snarling monster chick out on a killing spree. Meanwhile, Nadine and Jeremy discover their bosses alien gadgets and realize it’s up to them to keep earth from becoming an intergalactic feeding ground.

No doubt the appeal of Miss Lords’ physical attributes is what kept this VHS tape from getting dusty on the video store shelf. But all that aside, could the newly legit star act? Actually yes! I won’t claim her performance is perfect, there are certainly some rough patches, but she brings a great energy to her performance and has a pretty good sense of comic timing. That’s a lot more than can be said for the rest of the cast.

But remember, this is an ultra-low budget schlock fest. You’ll spot microphones coming into the shot and footage borrowed from other films. The out-of-left-field sequence where the rabid alien babe goes on a killing spree struck me as very familiar as I watched…then I realized it was lifted right out of “Hollywood Boulevard,” which I reviewed a few months ago. The strangest moment of borrowed footage is the opening credits…a montage of gross out moments from other Corman produced films that has nothing to do with what we are about to watch.

I can’t really recommend “Not of This Earth,” it’s sloppily made and goes way out of it’s way to make sure no opportunity for nudity is missed. However, Traci Lords does impress with her performance. She rises above the schlock and shows why she was able to successfully move away from her controversial past.

2 thoughts on “Not of This Earth”