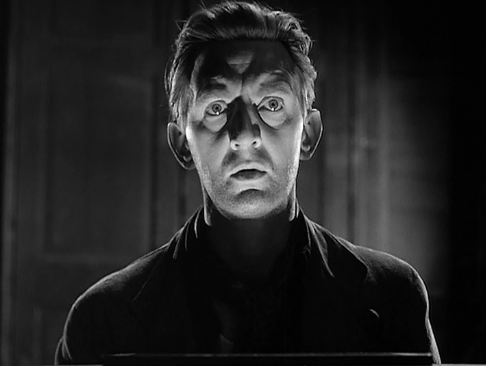 When you think Hammer, you think horror. 1957’s “The Curse of Frankenstein,” directed by Terence Fisher, was their first really big horror hit. But today we have a Hammer film from 1953 that isn’t really a horror film, but certainly has some horror elements. In some ways, it’s a story that certainly brings Frankenstein to mind. Also directed by Fisher, it’s “Four Sided Triangle.”

The story concerns three people who were playmates as children. Robin (John Van Eyssen) is a child of privilege, Bill (Stephen Murray) was orphaned when his parents died and was taken in by the kindly “Doc” Harvey (James Hayter). And then there is Lena (Barbara Payton), whose affection the two boys competed for as kids. As they grew, though, Lena returned to the US with her family while Robin and Bill attended college together. 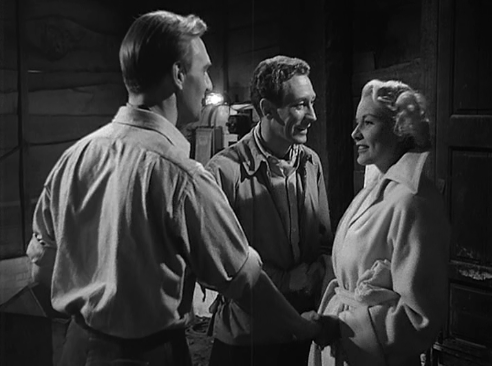 Several years later, Lena returns. She has become cynical and even seems to speak of suicide with Doc. But when Doc takes her to visit the two young men, her attitudes begin to change. They are working on a project, the nature of which they have not shared with Doc, or with Robin’s father (Kynaston Reeves) who provided the startup money. Doc encourages Lena to consider becoming an assistant of sorts for Robin and Bill. She ends up accepting the challenge and gaining a new lease on life. 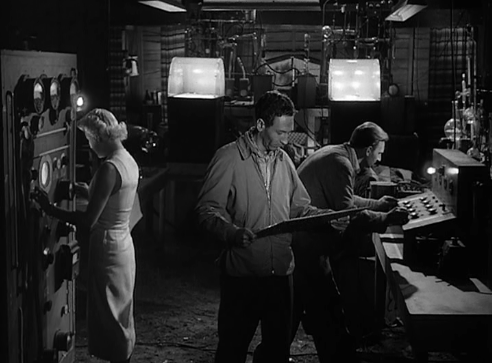 After several weeks, the trio is ready to share their experiment. What they have created is a machine that can duplicate any object. An object is placed into a chamber and after lots of dial turning electronic zaps, an exact replica appears in another chamber. They prove it to Doc by duplicating his pocket watch. Later they show their invention to Robin’s father, who is anxious to take this amazing invention to the government officials. Robin and Bill are not seeking personal gain, but the opportunity to serve their fellow man. 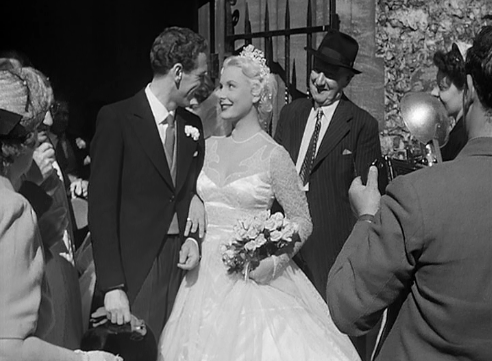 Everyone is anticipating big things, but other big things are happening. Robin and Lena have fallen in love and are planning on getting married. But Bill is also in love with Lena. Needless to say, he is crushed. While Robin and Lena are on their honeymoon, Bill begins to work on a project of his own. He reveals to Doc that early in their experiments, he and Robin attempted to use their machine on living creatures, but the duplicate never lived. He enlists Doc to give his medical assistance and the two successfully duplicate a rabbit that survives. Now, the plan is to create a duplicate Lena. 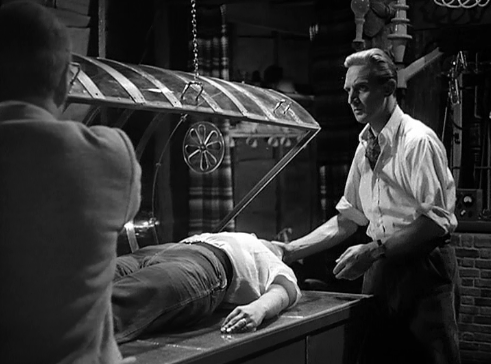 When the honeymoon ends, Lena returns while Robin stays in London to discuss matters with the government. Strangely, Doc tells her of Bill’s plan, and she actually consents to be duplicated. The procedure works, and a duplicate Lena, which Bill dubs Helen, is born. The two go off on a sort of Honeymoon of their own, but all is not well will Helen. She still has Lena’s memories…which means she loves Robin. She even attempts to drown herself because she is not with the man she loves. This leads Bill to attempt a process to clear Helen’s memory, so she can start fresh. Lena even agrees to assist…but disaster looms just as Robin returns from his trip. 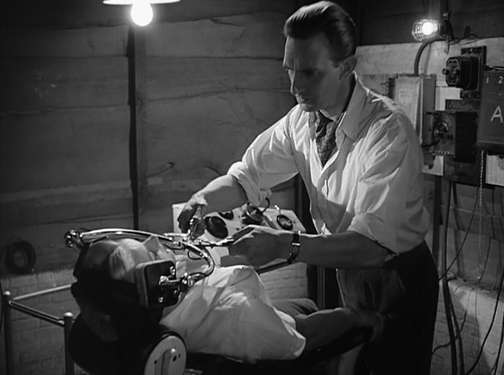 “Four Sided Triangle” is a great little sci-fi surprise. The premise is creative, and a bit spooky. It’s kind of a mad scientist movie, but our mad scientist is actually a pretty normal guy. Bill is driven by his own selfish desires, for sure, but he’s not flailing around the lab Victor Frankenstein style. It’s interesting to think that had Hammer made this film just a few years later, their take on it would probably have been much different. I’m sure it would’ve been much darker. It certainly wouldn’t have had the nice tidy happy ending that we get here. That’s one of my few complaints with the story. But the wonderful buzzing and zapping gadgets in the lab give this one just enough of that classic horror vibe.

The three leads all do an effective job, though a little more sexual tension between them would’ve been appropriate. Granted, we’re talking 1952 here…the filmmakers were probably already a little nervous that they were pushing it. James Hayter also does a fine job as Doc, though his performance is tainted a little bit by the fact that he ends up having to do the clunky, and completely unnecessary narration.

“Four Sided Triangle” is a film worth seeking out that raises complicated questions about science and morality. In addition, it’s an interesting look at the Hammer Studio at the very beginning of their move toward sci-fi and horror.