A quick look at the reviews I’ve done in the past should make my love for juvenile delinquent movies pretty apparent. Today we’re going to look at a film which may have one of the greatest titles in the history of the juvenile delinquent genre. It’s the tale of a new girl at school, desperate to fit in with the girl gang that runs the joint. From 1958 it’s “High School Hellcats.”

The story focuses on Joyce Martin (Yvonne Lime), she’s the squeaky-clean new girl on campus. While she waits for her first class to begin, she meets tough girl Connie Harris (Jana Lund), leader of the all-girl gang the Hellcats. Connie quickly informs Joyce that she has absolutely no chance of having a social life, or getting to go out with boys, at this school unless she joins up with the gang. This is one tough gang, folks! Just to prove it, they all plan on wearing slacks (gasp, slacks) to school the next day. At least, that’s what they tell Joyce. The following day, Joyce is the only one who isn’t wearing a skirt. When the young teacher, Ms Davis (Rhoda Williams) confronts Joyce over her fashion faux pas..the embarassed teen runs out of the classroom in tears.

Joyce heads for the local coffee shop where a young man, Mike (Brett Halsey), works the counter. He’s working his way through night school and soon catches Joyce’s interest. Later that night, Joyce gets a call from Connie inviting her to a meeting of the Hellcats at an abandoned movie theater. It seems that Connie is considering Joyce for the Hellcats, but she must pass some initiations first…including swiping some stuff from a five and dime store and asking out a boy who already has a girlfriend. What’s the matter with these kids today? 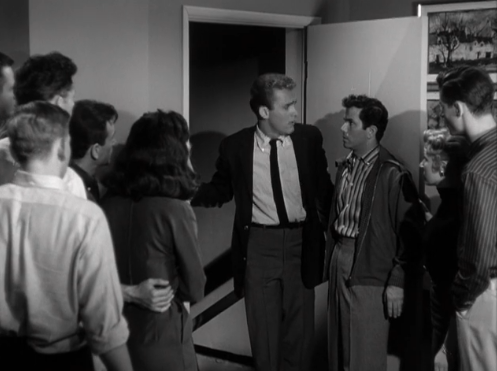 Things seem to be going good for Joyce…well, except that Mike isn’t too happy with her choice of friends. Oh, and then there’s Dolly (Suzanne Sydney), the gang’s second in command, who suspects that Connie wants to replace her with Joyce. Things really start to turn bad, though, when the Hellcats head to a party…held at the home of a family they know are on vacation. One of the young men at the party suggests they play a game called “sardines.” It involves turning out the lights so the guys can grope around in the dark trying to find people. I think the emphasis is on the groping part. While the lights are out, there is a scream. The partiers soon discover that the source of the noise is Connie, who has fallen down the stairs to her death. Then everyone quickly packs up and heads out, leaving Connie’s body behind. 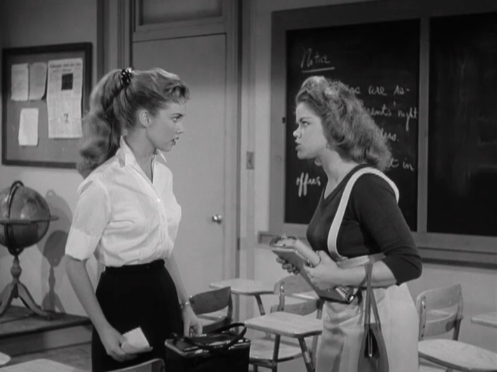 Now, Dolly has assumed control of the Hellcats and is trying to make sure all the girls have their story straight. They have to think quickly, though, since a police officer (Robert Anderson) has come to the school to ask questions. The girls get through the interviews, but Dolly, is convinced that Joyce is going to squeal to the cops, so she starts to plot to make sure that the new girl stays quiet…for good.

Now this is how a juvenile delinquent movie should be! It’s got all the key ingredients…a straight-laced girl who falls in with the wrong crowd, clueless parents, the works! At first, the Hellcats gang is somewhat laughable. I mean, under Connie’s leadership, they really aren’t all that tough. But when Dolly takes over…man, she is one nasty chick! Her final knife-wielding showdown with Joyce in the balcony of the movie theater is great! A bit predictable, I’ll give ya that…but also way too fun to spoil here.

Yvonne Lime is great as the good girl flirting with the dark side. Another highlight is Don Shelton as Joyce’s fly-off-the-handle father. He can barely find the time to pull his nose out of his daily paper to complain about his daughter wearing too much lipstick…that is, when he isn’t smacking her across the cheek for daring to come downstairs wearing just her slip. No wonder Joyce falls in with a gang so quickly.