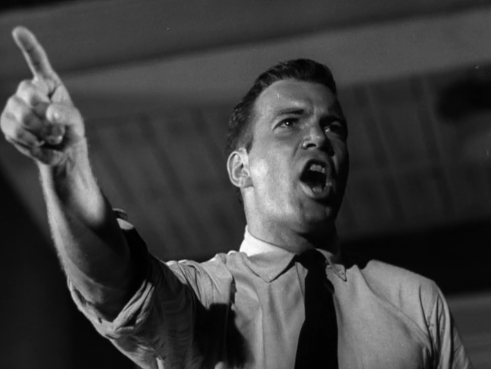 If ever there was an actor who has had to deal with the problem of being so associated with just one role it’s William Shatner. As I understand it, he once really struggled with the fact that so many only recognized him for playing Captain Kirk, but in recent years he’s seemed to embrace it more. Granted, some of the work he did between the original run of Star Trek and it’s resurgence on the big screen was not exactly on, shall we say, a high level. But if you’ve ever doubted Shatner’s ability to perform outside of Starfleet, one need only look to a film he did four years before going where no man had gone before. It’s a hard-hitting and controversial film about racism, directed by, of all people, Roger Corman…1962’s “The Intruder.”

Shatner plays Adam Cramer, a young man who comes to the Southern town of Caxton. This town sits on the eve of 10 black teenagers being integrated into the town’s white high school. Of course, many residents are not at all thrilled about this…which is exactly why Cramer is in town. He claims to represent an organization called The Patrick Henry Society and his goal is nothing less than to get the residents to fight school integration. 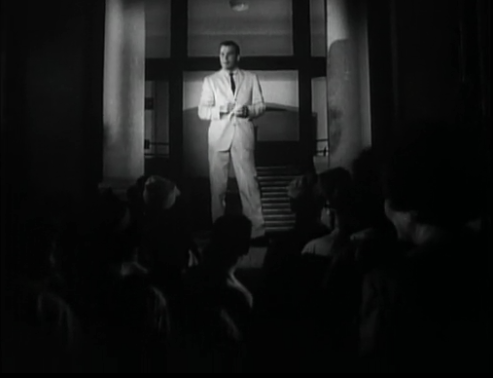 People in town take an immediate liking to Cramer. He’s an appealing fellow…friendly, young, handsome, kind to children and old ladies. He even manages to catch the eye of Ella McDaniel (Beverly Lunsford), a high school student who works the soda counter at the drug store. One of the few folks in town who is suspicious of Cramer is Ella’s father, newspaper editor Tom McDaniel (Frank Maxwell). Tom stands by and watches one night as Cramer riles up the townsfolk with a dramatic speech on the steps of city hall. As the citizens head out, a group spots a black family driving through town and begins to harass them. Tom has no choice but to intervene, though it doesn’t exactly endear him to his neighbors…or even his wife, who does not share his positive view on integration.

Things get worse and worse in town, much to Cramer’s delight. When a black church is bombed, resulting in the death of the minister, it looks like the black teens won’t return to the school. But Tom encourages them not to back down, and even walks with them to the school the next day. This leads to him being brutally beaten by a group of townsfolk.

Tom’s family is worried now, especially Ella. But this is just what Cramer needs. He sneaks into the girl’s room and tells her that the townsfolk will surely kill her father, but there is a way she can stop that from happening. This leads to a situation where Ella lures one of the black students into a storeroom at the school. He believes he is there to help her with some boxes, but she runs out screaming, accusing the boy of trying to rape her. Now Cramer leads the townsfolk as they to storm the school and serve their own brand of justice on the boy.

It was probably about 20 years ago when I first heard about “The Intruder” in Roger Corman’s autobiography. Of course, Corman is known for directing films like “Attack of the Crab Monsters,” “Teenage Cave Man,” and “The Wasp Woman.” He’s the king of the B-movies. But that’s not say that he’s not a skilled and talented director. His series of films inspired by the work of Edgar Allan Poe are evidence of that. “The Intruder” is certainly not the typical Corman film…and it may very well be his best work. It is still a monster movie, though, but with a monster of the real life variety.

It is clear when watching how important this film was to Corman. The director was known for getting every cent worth out of his production costs, and God bless him for it…but this film seems to have a careful patience behind it that is not always at the forefront in other Corman films. That certainly comes through in Shatner’s performance…which may very well be his finest ever. There is nothing over-the-top about it. It’s a believable performance…both charismatic and terrifying. It’s an amazing achievement all by itself, but Corman’s camera enhances it all the more. The way the director shoots Shatner’s courthouse steps speech is especially effective. 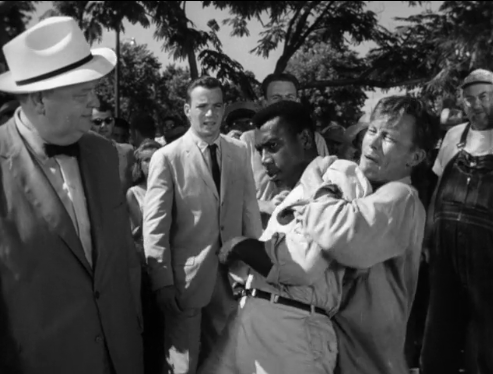 As much as I was blown away by Shatner, I don’t want to neglect the rest of the cast, who also do a fine job. Most triumphant among them is Charles Barnes as the young black student accused of a crime he didn’t commit. He approaches the role with a quiet dignity which is perfect in the face of the burning anger coming from Shatner.

50 years have passed since “The Intruder” first hit screens. Like most of Corman’s films, it was made quickly with a very small budget. Corman has claimed it was the only movie he ever lost money on. I’m sure it was a powerful film at the time of it’s release, sadly it never found it’s audience. Today, it is still powerful, still shocking, still scary. It is an important film, from the unlikeliest of directors, and one that it truly does sadden me to have to list among the ranks of “Forgotten Films.”

5 thoughts on “The Intruder”