Even folks who don’t really pay attention to bad movies know who Ed Wood was.  Johnny Depp played him in a Tim Burton flick, after all.  Not as well-known, but someone with just as unusual a story, is director Tom Graeff.  Graeff only directed two features, the most famous of which is today’s film, 1959’s “Teenagers from Outer Space.”

The film begins with an alien spaceship landing in a deserted area.  As the hatch of the flying saucer opens, and a strange figure emerges, a curious dog runs up to check things out.  Unfortunately, this dog learns that your don’t go sniffing around flying saucers the hard way, as one of the aliens aims his weapon and fires, causing the dog to collapse into a pile of bones.  The trigger happy alien is called Thor (Bryan Grant), and he shows no remorse for killing the creature.  On the other hand, one of the other aliens, Derek (David Love) is disturbed by this, especially after he discovers the dog’s ID tag, indicating that there is intelligent life on the planet.  This matters not to Thor!  The planet seems a suitable environment for raising the lobster-like creatures called Gargons which these aliens raise for food.  They start small, but grow quickly to gigantic proportions. 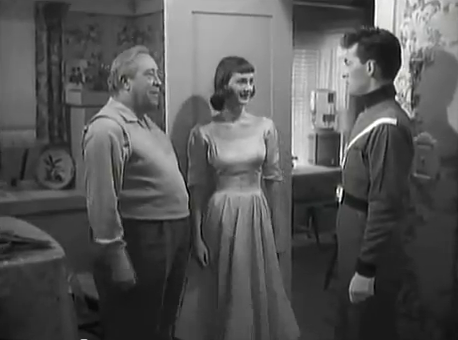 Derek decides that he will go and find the intelligent inhabitants of the planet.  Since the dog tag has an address on it, that seems a good place to start.  This doesn’t go over well with the others, and Thor is sent out to find Derek.  After asking for directions at a gas station, Derek ends up at the dog’s home.  There he meets spunky teenager Betty (Dawn Anderson) and her somewhat absent-minded Grandpa (Harvey B Dunn).  And it just so happens they have a room for rent, which they let Derek have even though he has no way to pay for it.

Betty is due to attend a pool party at the home of her friend Alice (Sonia Torgeson) that afternoon.  But when her reporter boyfriend Joe (Graeff himself) shows up, he informs her that plans have changed.  See, there’s been reports of a flying saucer outside of town and he needs to check it out.  So, she ends up taking her hunky new friend Derek instead. 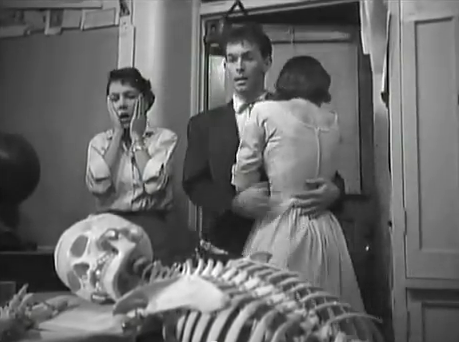 At this point, Thor has begun his search for Derek and is having all sorts of fun zapping people with his ray gun and turning them into skeletons.  When he shows up at Betty’s house, dopey Grandpa is more than happy to tell him where to find Derek and Betty.  He ends up just missing the teens at the pool party, but still gets his kicks burning the flesh off of Alice.

Eventually, Thor catches up with Derek at the courthouse, where cops have a shootout with the nasty alien.  Merely wounded, though, Thor forces Derek and Betty to take him to a doctor.  Later, the couple escapes…then Thor kidnaps a nurse and flees.  There are car chases and crashes…but that’s just the beginning.  The Gargon has grown to full-size…which means a giant lobster threatens the town! 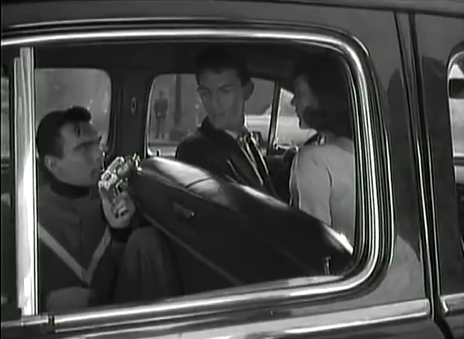 “Teenagers from Outer Space” is a bad movie, plain and simple, but it is a whole lot of fun!  The centerpiece of it all is the absolutely horrible acting.  The delivery is so stilted..it’s almost as if every cast member had a copy of the script taped to their chest so the other actors could reference it.  Actually, the film may have turned out better if that had truly been the case.  Supposedly, the dialogue for some sequences was pre-recorded and the actors simply lip-synched their way through the scenes (this was to save on the cost of sound equipment). The standout performances include Bryan Grant’s insanely angry performance as Thor, and uber-vampy Sonia Torgeson, who never leaves the pool in her scenes.  But it almost feels silly to single anybody out.  The entire cast does their part!  This is ensemble bad acting at it’s finest!

As bad as this film is, it’s one you can’t help but love.  I mean, there’s a certain ridiculous charm about a movie where jumpsuits spiced up with duct tape serve as spacesuits, audio mixing boards fill in for alien technology, and a skeleton most likely borrowed from a high school biology classroom plays all the corpses.  Though this film has done time on an episode of Mystery Science Theater 3000, it’s a fun movie even without the running commentary.

I hinted earlier that the story of director Tom Graeff was an unusual one.  It seems that the adventure of making “Teenagers from Outer Space” had a unique effect on the director.  Just a few months after this film was released,  to less than stellar returns and reviews, Graeff suffered a breakdown.  He went as far as to take out ads in the LA Times describing an encounter he had with God and how he was now to be known as Jesus Christ II.  He even tried to legally change his name and caused quite a scene trying to preach at various churches.  Sadly, he ended up taking his own life in 1970.

Despite it’s many, and I do mean many, shortcomings, you can’t deny that this film certainly displays some degree of drive and passion from it’s director.  “Teenagers from Outer Space” may be a bad film…but it’s also an entertaining film.  In the end, the later is always more important.

3 thoughts on “Teenagers from Outer Space”