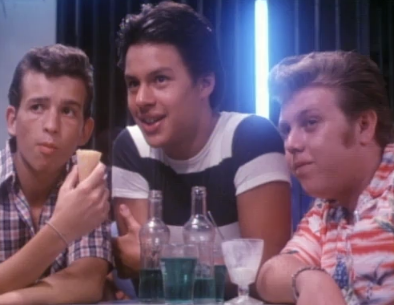 I’ve never been the kind of person who complains about studios making sequel after sequel of a hit film. If people still want to pay to see the movies, what do I care if they make Air Bud 27? And honestly, some of today’s series’ of sequels are nothing compared to some of the big boys. Godzilla has starred in 28 films! Still, it’s amazing that some series’ have gone as far as they have. 12 Friday the 13th’s, 7 Saw’s, 7 Police Academy’s, 9 Lemon Popsicle’s. What’s that you say? What’s “Lemon Popsicle?” Drawing some inspiration from “American Graffiti,” this 1979 Israeli film (known in it’s homeland as “Eskimo Limon”) was a worldwide hit that’s little remembered here in the US today. It spawned 8 sequels and a spin-off, inspired other 80’s sex comedies like “Porky’s,” and was remade in America by it’s original director as “The Last American Virgin.”

The plot follows three high school boys in 1950’s Tel Aviv. Benji (Yftach Katzur) is the handsome but shy one, Bobby (Jonathan Sagall) is the hunky one, and Hughie (Zachi Noy) is the chubby one. Needless to say…Benji, Bobby, and Hughie are not the character names in the Hebrew language original. These three pretty much have one thing one their minds, yup, losing their virginity. Benji, in particular, has his eye on a girl at school named Niki (Anat Atzmon). Unfortunately, just when he thinks he’s making a connection with her, his buddy Bobby swoops in and starts romancing her.

Benji’s luck changes one day, though, while working his job delivering ice. He makes a delivery to the apartment of an older woman named Stella (Ophelia Struhl), who quickly starts coming on to him. For some reason, he decides to go get his two buddies so they can all share in the fun. One by one, the young men are invited into Stella’s bedroom, and all are quite successful in their endeavor. That is, until it’s Benji’s turn, which is interrupted by the arrival of Stella’s sailor boyfriend. A short time later, though, all three enjoy the company of a prostitute…who gives them all crabs. There is a pretty funny scene where the three stumble through trying to ask the local pharmacist for something to get rid of the little buggers.

The film takes a drastic turn toward more serious material as it nears it’s end. At this point, though Benji is still crushing on Niki, he’s pretty much resigned to the fact that she’s Bobby’s girl. But then, she gets pregnant after her first sexual encounter with Bobby. When she tells him, Bobby promptly breaks up with her. Now, Benji steps in to help…borrowing money to pay for an abortion and allowing her to stay in his deceased grandmother’s house. After going to such lengths to help her, it now seems that Nikki is falling for the dependable Benji…but in this story, nice guys finish last. 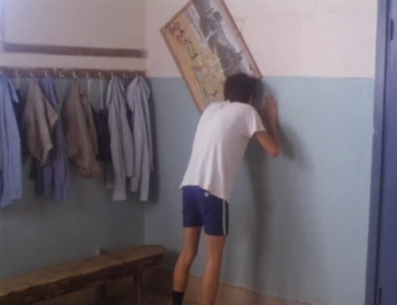 With it’s almost non-stop soundtrack of classic 50’s tunes, one can’t help but see the influence of “American Graffiti” on this film. And make no mistake, the soundtrack is great! At the same time, this is quite raunchy material, bringing to mind such 50’s set teen sex comedies as “Porky’s” and “Mischief.” This even has a variation on the hole between the boys and girls locker rooms scene, three years before “Porky’s.” But the material is handled a bit more graphically than what American audiences are used to. There is quite a bit of both female and male nudity…I guess depending on the viewer, some of the scenes can be somewhat awkward.

All the sexual situations aside, one of the most jarring aspects of the film is the sequence of the film is where Benji takes Nikki to a doctor to have the abortion. It does have a strange effect on the viewer when a film that has had several scenes of nudity intended for titillation, now has a scene where the female lead strips down and gets onto the examining table. The seriousness of the scene is heightened even more when the doctor quite violently lifts her legs and drops them into the stirrups. It is not an easy scene to watch.

Though the final twenty minutes of the film have a bleak tone, I don’t want to give the wrong impression. The majority of the film is quite playful. The music plays into this to great effect, with several scenes that utilize classic 50’s tunes which mirror the action on screen. My favorite bit was the use of the obscure ditty “Seven Little Girls (Sittin’ in the Back Seat).”

Although dubbed films are always going to have some things that get lost in translation, for the most part, the performances of the four leads come through strong. It all comes together to create a pretty believable look at teens in the 50’s. It’s certainly an intriguing film considering that this little sex comedy from Israel may have influenced more than a fair share of the movies you tried to watch on late night HBO without your parents knowing.