When I was a kid, it was a big deal for us when we reached the age when our parents would allow us to ride our bikes six blocks down to the local corner drug store. Now, six blocks doesn’t seem like much, but this meant crossing “the busy street.” At the drug store, we would buy stuff like candy and baseball cards. In 1985, one of thing we often bought were Garbage Pail Kids. These were cards put out by Topps that depicted grotesque parodies of the popular Cabbage Patch Kids. They were actually stickers, but if you were collecting them you didn’t do stupid things like actually stick them on things. These things were popular, and in 1987 they ended up coming to the big screen in “The Garbage Pail Kids Movie”

The film follows a young teen named Dodger (MacKenzie Astin) who is often picked on by older kids, especially the uber-jerk Juice (Ron MacLachlan). Juice often hangs out with the lovely Tangerine (Katie Barberi), who Dodger has a crush on. Dodger’s status on the popularity scale isn’t helped by the fact that he works in the antique store of the strange Captain Manzini (Anthony Newley). One day, while in the shop, Dodger discovers a strange garbage can which the Captain warns him not to open. Of course, when Juice and his pals come over and cause trouble, the can gets knocked over. What comes out of the can? You have to ask? It’s the Garbage Pail Kids.

Now there are hundreds of Garbage Pail Kids cards. Thankfully, we only get seven of them in the movie…among them are the likes of Messie Tessie, Valerie Vomit, Windy Winston (he farts alot), and Ali Gator. Captain Manzini is none too happy about the kids being let out, so he sets out to try and find a magic spell to return them to the garbage pail. Meanwhile the kids need to stay locked up in the basement, which doesn’t exactly thrill them.

Meanwhile, Dodger sets out to try and impress Tangerine. He goes out with her one night to a club where she sells stylish clothes in the parking lot. Dodger becomes convinced that he needs some cool new clothes to impress her. The kids end up helping him come up with something using the stuff in the antique shop. Tangerine ends up loving the outfit and asks Dodger if he can get more clothes she can sell. So, he puts the kids to work making clothes for Tangerine. Essentially, he gets his own sweat shop going.

The kids have various adventures as they sneak out of the shop to visit the movies or a bar…dripping snot on things and peeing their pants the whole way. But big problems arise when the kids get locked up in the “State Home for the Ugly” and must escape to break up Tangerine’s big attempt to exploit their work in her fashion show.

You’re not getting any deep film analysis here today folks. This movie is all pee-pee and booger jokes. Of course jokes are supposed to be funny. There is nothing even mildly amusing about this film. Disgusting…there’s plenty of that, but amusing, not remotely. We’re talking about a film based on trading cards. At least “Mars Attacks” was based on cards that had somewhat of a story to it. I mean, I collected these things, but I don’t necessarily want to see them barfing on the big screen!  The story is dumb, the script is juvenile, and just when you think it can’t get worse…there’s even a musical number. 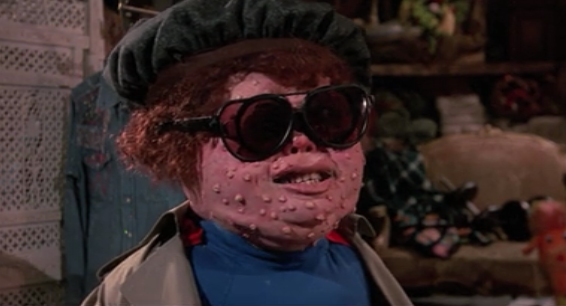 The big problem here is the central characters are just plain terrible. The look of the costumes is on a level of what you might see walking around the world’s worst amusement park. The mouths are so inarticulate that, in many scenes, the filmmakers don’t even try to have them move in sync. Even the voices are horrible, which is painful for me to say considering Jim Cummings, one of the great voice artists, provides several of them.

I guess it’s a good thing I never saw this movie back when I actually collected Garbage Pail Kids. It would’ve ruined the whole thing for me! They were funny little cards, but they made for on horrible movie.