Every now and then we see that extra little line in a film’s opening credits. You know the one, when they’re listing the cast and before the last name it says “and introducing…” That usually means that we have a bright new actor in one of the lead roles and the filmmakers really want you to know that they discovered them. When that person is up there accepting their Oscar a few years down the road, they can turn to the guy sitting next to them at the bar and say, “I introduced him!” And that very well may have happened, for the person who was “introduced” in today’s film has stood there with Oscar in hand a couple of times. Today we introduce you to one Denzel Washington in 1981’s “Carbon Copy.” 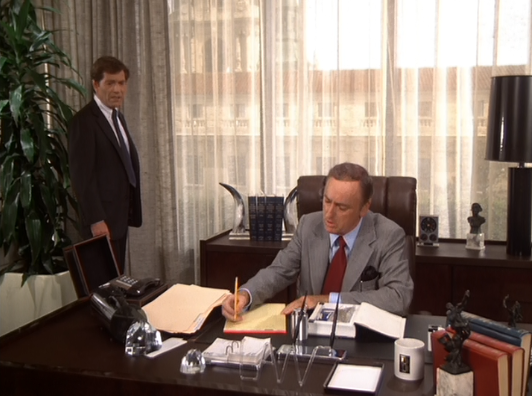 The film follows a successful businessman named Walter Whitney (George Segal). He’s got everything money can buy…life should be good. That is, except that his wife Vivian (Susan Saint James) hasn’t had sex with him in ages. His father-in-law, Nelson Longhurst (Jack Warden), also happens to be his boss.

One day, he is visited by a young-man named Roger Porter (Denzel Washington). He is the son of a woman…a black woman…who Walter once had a special relationship with. In fact, Walter once considered marrying her but Longhurst convinced him to put his career first. Being married to a black woman just wouldn’t be the path to success. By now you’ve probably guessed that Roger reveals that he is, in fact, Walter’s son.

At first, Walter does not intend on telling Vivian that Roger is his son. He tries to pass him off as a disadvantaged youth who they will “adopt” for the summer. Vivian’s is onboard with this because she will be the first of her friends to do such a generous thing. Everyone else is going to want one, but she’ll be first. But, sure enough, Roger’s lineage comes out into the open and trouble ensues.

Walter ends up being kicked out of his home, he loses his job and all his money. His attorney, and best friend (Dick Martin) even dumps him to represent Vivian and refers Walter on to lawyer better suited for him…who, of course, is black (Paul Winfield). With just a few spare bucks to his name, Walter and Roger end up living in a run-down motel. Walter’s attempts to get another job all fail since Longhurst has made sure that no one else will hire him. Walter is reduced to joining the ranks of illegal immigrants, standing on a street corner looking for work doing any sort odd jobs available. He ends up going off to clean out horse stables in his business suit. Walter and Roger end up having to work together to get by and Walter must later decide whether to regain his former life or stick with the son he didn’t know he had.

Of course, racial prejudices is one of the central themes of “Carbon Copy,” and it certainly does lay it on strong at points. Don’t get me wrong, I wouldn’t dream of claiming that prejudices didn’t exist in 1981, however, some of this does seem a bit out of place. At times it feels like this story would’ve been better suited for 1971, rather than 81. It’s like the film is going out of its way to be controversial. Though there are some funny moments, the comedy does suffer as a result.

I will say that the cast, for the most part, rises above the level of the material they’re given to work with. Denzel Washington is certainly the reason many people would be interested in looking at this film today. It’s his first movie, so it’s not as skilled a performance as he would display later, but we certainly see the potential. To be honest, the highlight of the film for me was Paul Winfield. I think the film actually would’ve been a lot stronger had his character played a larger role. Even George Segal, who is an actor I really don’t care for much of the time, does a pretty good job and has a few solid comedic moments.

As a comedy, “Carbon Copy” is only mildly amusing, and it doesn’t really manage to be hard-hitting as a commentary on racial prejudices. But the film is not a total loss. There are certainly worse ways Denzel Washington could’ve been “introduced” to the world.