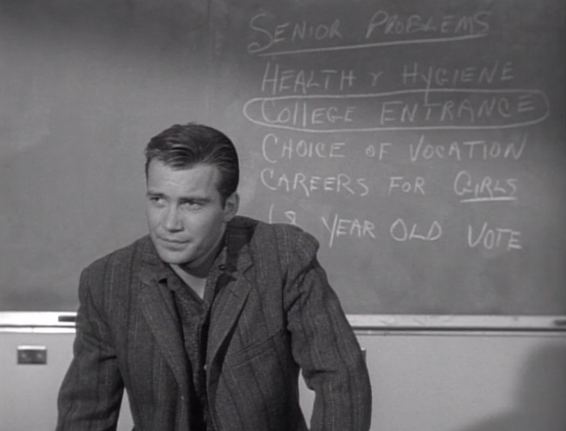 The teenagers in our movie today have what may be one of the coolest things ever. They have Captain James T. Kirk for a teacher! Of course, this is was a few years before he would go where no man has gone before. Still, these kids were smart enough to tell that this guy had a way with the ladies, from this world and others, which is why they have no hesitation in asking him to give them the lowdown on S-E-X. Prepare to get an education with 1961’s “The Explosive Generation.”

The film opens with a bunch of teenagers having a wild party at a beach house. When morning rolls around, four friends, Janet (Patty McCormick), Lee (Dan Carlyle) , Bobby (Billy Gray) and Margie (Suzi Carnell), are still there. In other words, they spent the night…together. When they realize they are about to be late for school, they scramble to get ready and agree that they better not talk about what went on the night before. Janet, however, seems a bit uneasy about the whole thing.

The students join their classmates (one of which is Beau Bridges, by the way) and head to their favorite class with their cool teacher Mr. Gifford (William Shatner). Gifford has been devoting some class time to discussing the issues that are important to these soon-to-be high school graduates…college, jobs, money, etc. But we all know that there’s really only one thing on the minds of these kids…especially Janet who suggests they talk about sex. Recognizing that this is a sensitive subject, Gifford suggests that the class members write their questions down and submit them to him unsigned. That way, nobody will know who is doing the asking.

It doesn’t take long for Lee and Bobby to start to get nervous about what Janet may have written on her paper, especially considering what happened the night before. They soon convince her to ask Gifford for her paper back. Next thing you know, though, a few PTA parents have caught wind of this little excursion into sex ed. They soon start making demands on the principal (Edward Platt) to confiscate the papers, destroy them, and stop Gifford from going on with the class discussion.

Gifford, though, feels he needs to respect the student’s wishes. When he goes on with his plans, he is suspended and asked to submit his resignation. The students, though, refuse to put up with this. They organize a protest, deciding not to go into the school until Gifford is allowed back in the school with his job in tact.

“The Explosive Generation” is certainly a product of a different time. I don’t think it’s too big of a spoiler to reveal that nothing really happens between Janet and Dan at the beach house. I mean, she wakes up on the couch, he’s down on the floor. But the fact that something almost happened is enough to completely stress out the whole town. So, the teenage sex scandal that isn’t really a sex scandal aspect of the film does come across as a wee bit silly in a cinematic world where we have the likes of “American Pie.” The second half of the film which focuses on the student’s protest efforts is a bit more intriguing, though. Considering how youth protests would become such a part of the American landscape in the late 60’s, it’s interesting to see this sort of scenario as early as 1961. 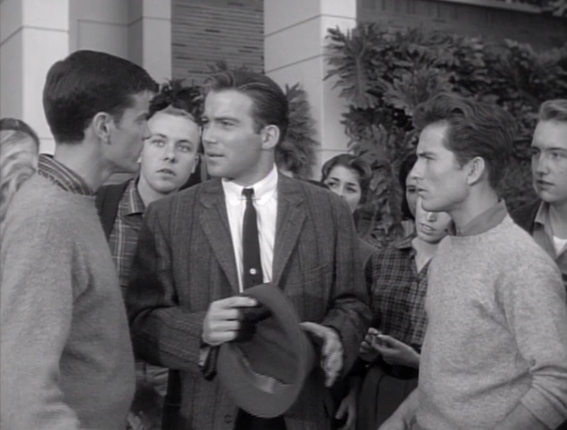 The cast does a fine job. Unlike many teen flicks of the 50’s and early 60’s, this cast is actually a somewhat believable as high schoolers. In other words, they don’t look like they’re pushin’ 30. we also get a great bunch of full-of-themselves parents. Shatner, though, is the main reason to give this film a look. He is perfectly cast as the idealistic young teacher…and in true Shatner fashion, he completely eats it up. I’ve always loved Shatner as Captain Kirk, but after seeing this, and another pre-Trek performance of his in “The Intruder,” I’m seeing that I’ve often lost sight of what a solid actor he really is.

The film’s subject matter does get a bit heavy from time to time, but it’s still a fun ride. It isn’t really a fun film in the way that a juvenile delinquent flick from the same era might be, but “The Explosive Generation” is still an enjoyable slice of the early 60’s.

11 thoughts on “The Explosive Generation”