Who’s the greatest lawman in the history of the moving image? Barney Fife, of course! Well, maybe that’s a stretch…after all, Barney kept his only bullet in his pocket. Don Knotts’ alter ego was certainly a beloved character, if not quick on the draw. In today’s movie, Knotts brings his less-than-stellar shooting skills to the old west in 1968’s “The Shakiest Gun in the West.”

Our story begins in Philadelphia as Jesse W. Haywood (Knotts) is graduating top in his class from dental school. He has decided that he is going to head out to start his practice in the wild west. It doesn’t take long for Jesse to experience just how “wild” the wild west is when the stagecoach he’s traveling on is robbed by a couple of masked bandits.

One of the bandits is the lovely Penelope Cushings (Barbara Rhoades), aka Bad Penny. She’s been a successful crook, but this time she ends up getting caught. This leads to her striking a deal with the law. She signs on to help the government track down some smugglers who are supplying guns to the indians. It is suspected that the smugglers are traveling with a wagon train, so Penelope and another agent are all set to join the group, posing as husband and wife. But when her partner ends up dead she has to find another husband quickly…since single ladies are not allowed on the wagon train. Enter Dr. Haywood. 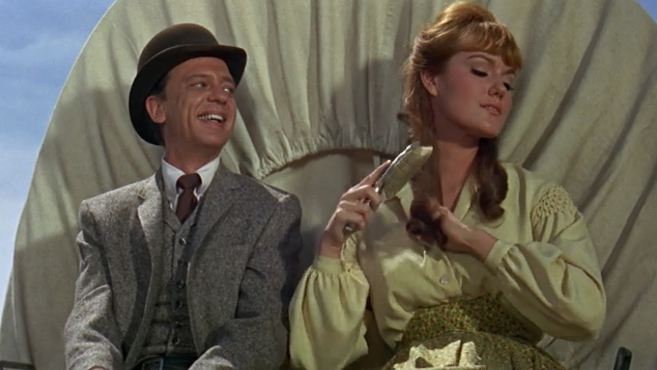 As the wagon train heads out, we begin to become suspicious of the Reverend Grant (Donald Barry) and his companion Mr. Basch (Jackie Coogan). They are traveling with several large crates, supposedly filled with Bibles, but in reality they are full of guns. Haywood, of course, is oblivious to all this, and that his new wife is searching for smugglers. He’s got other things on his mind, after all…it’s his wedding night! Too bad indians attack before the marriage is consummated. Haywood attempts to fight off the attackers, but he is clueless with a gun. Penelope, however, is a sharp-shooter and manages to take out several of the indians no problem. Though, it appears that Haywood was the one responsible.

When the wagon train finally rolls into town, everyone swarms around this new hero responsible for ending the attack. Of course, Haywood is more than happy to do what he can to build up his own legend. He becomes even more famous when he takes out local bad guy Arnold the Kid (Robert Yuro), with Penelope’s help, of course. Eventually, though, both Haywood and the townsfolk learn the truth about who the real gunslinger is. But when Pennelope ends up captured by the smugglers and the indians they are selling to, Haywood must become the hero after all and save her. 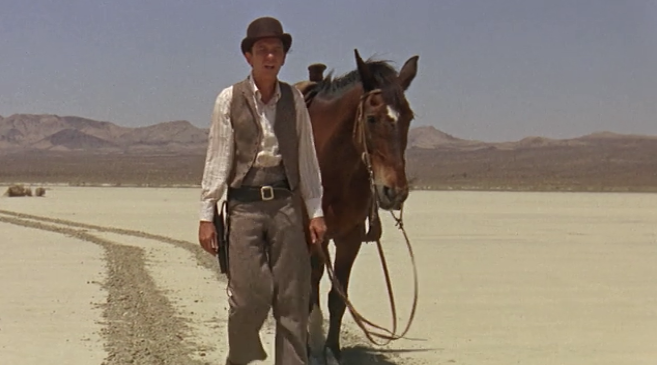 This is essentially a remake of the 1948 Bob Hope film “The Paleface.” But so what!? Putting the considerable comic talents of Don Knotts into a western setting is an inspired choice. Knotts is the king of playing characters who think they are tough but are absolutely clueless. Mix that in with all the perils of the west at it’s wildest and you’ve got a good formula for comedy. Knotts just has a way of creating character that you can’t help but root for, as hapless as they are.s 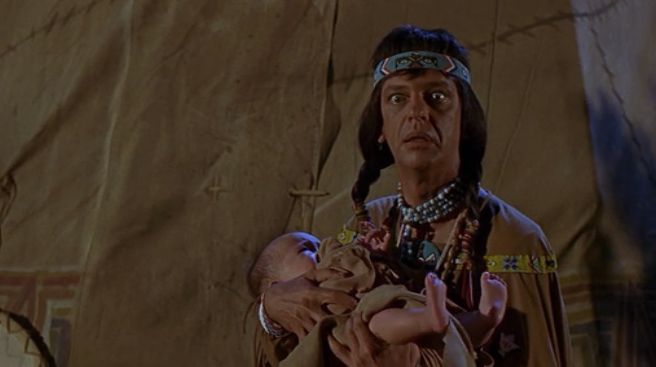 The supporting cast has their share of good moments as well. Carl Ballantine and Pat Morita are very funny early in the film as a shifty western shop owner and his Asian assistant. Barbara Rhodes also does a great job as a tough-as-nails western gal who’s also extremely sexy. As a matter of fact, it was a little surprising how much her sexuality is played up in this film. Knotts’ 60’s comedies tend to be considered family fare these days…but the “will they or won’t they” element of Haywood and Penelope’s relationship does get a bit more than just a sly wink in this film…and provides some solid laughs.

The film does start a little slow, and I can’t say that all of the gags work, but the film goes a long way on the simple charm Knotts brings to his character. He was a master comedian and is still a joy to watch. There are few who disagree that “The Paleface” is the superior film, but “The Shakiest Gun in the West” is still an enjoyable and funny western comedy in it’s own right. Fearless Fife would’ve been proud.

2 thoughts on “The Shakiest Gun in the West”