I’ve known a lot of people with unique names. I have a cousin named Coke, I went to school with a guy named Helmuth, and I know a kid named Talon…but never in my life have I known a Chachi. I dare say, there may be only one Chachi in the world. The one loved by Joanie! Face it, not even a successful run on Charles in Charge could change the fact that Scott Baio will always be known as Chachi to some people. In today’s film, however, he’s Barney…still teamed with his Charles in Charge buddy Willie Aames, though, in 1982’s “Zapped!”

Barney is essentially the smartest student in his school and spends most of his time locked in the science lab conducting his little experiments. This involves things like teaching mice to scuba dive and growing pot. He does however have one good friend, the girl-obsessed rich kid Peyton (Aames). There’s also the cute but nerdy class president Bernadette (Felice Schachter…famous as one of the refugees of the first season of The Facts of Life). However, both guys seem to be more obsessed with the busty blonde cheerleader Jane Mitchell (Heather Thomas).

One day in the lab a collection of various random chemicals end up getting mixed together and causing a bit of an explosion. The explosion doesn’t cause a whole lot of damage, but eventually Barney realizes that he now has some psychic powers. Soon, Barney is causing trouble around the school, causing a classroom map to fly off the wall in one scene…but in true 80’s sex comedy fashion, he soon employs this power to make Jane’s sweater pop open. The power does come in handy, though, for orchestrating an opportunity for chronic benchwarmer Barney to be the hero of the big baseball game.

Peyton and Bernadette are the only ones who know about Barney’s power. Bernadette is interested in observing the results, but Peyton is out to get Barney to help him score with Jane. He gets Barney to use his powers to make a fool out of Jane’s college boyfriend making her much more willing to join Peyton at his love pad. Meanwhile, Barney and Bernadette begin to become a couple, even making love in the science lab.

As time moves on, Peyton continues to exploit Barneys powers. This causes a rift with Bernadette when Peyton insists Barney skip a date with her so the two can win big bucks at a college fraternity gambling party. Before long, Barney has trouble controlling his powers which leads to a Carrie-inspired incident at the prom where everyone’s clothes start flying off.

“Zapped!” may feature what is the ultimate dumb premise for an 80’s teen sex comedy, which is, of course, firmly rooted in the fantasies of just about every teenage boy. In the end, though, the film really doesn’t spend a lot of time having our leads use their Jedi powers to bust open bras. It isn’t until the final prom sequence that things really start to get over-the-top in the gratuitous nudity department. I actually found the prom scene to be quite funny in how it clearly tries to parody “Carrie.” A few other film parodies pop up throughout the film, from “Star Trek” to “The Exorcist,” with some working and some not.

The film is actually somewhat good-natured compared to many 80’s teen sex comedies. Baio’s character is a nice guy and certainly not overly geeky. I also really liked Felice Schachter who earns a place right alongside Michelle Meyrink (Real Genius) in the hall of 80’s nerdy girl crushes. Even the horndog character played by Willie Aames is a nice guy, nowhere near the sex-offender status earned by say Bubba in “Private School.” There are also a few fun supporting players including Scatman Crothers, whose drug-fueled hallucination (which also features Sanford & Son’s Aunt Esther LaWanda Page) is the film’s best scene, and a all-too-short appearance from Eddie Deezen. 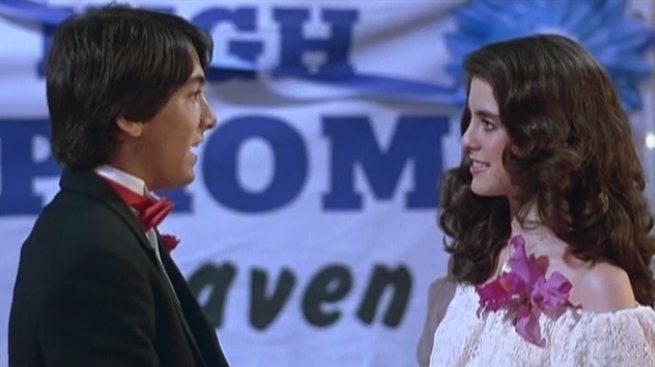 I have been aware of “Zapped!” since it’s release over 30 years ago, but this was my first viewing. I’m glad to say I was pleasantly surprised. It has a goofy premise, but it rises above it…to some degree. I mean, it could’ve been 90 minutes of Baio and Aames making panties fly around the room. Though there’s plenty of that in the film’s finale, the majority of the film is good-natured fun.