In the late 70’s and early 80’s haunted house stories were quite popular, spearheaded by the book The Amityville Horror and the several movies it inspired. I remember when the ads for today’s film, 1986’s House, first hit the airwaves. There were many low-angle shots of a dark and ominous looking house…very Amityville. However, though it’s a horror movie at its core, the film also ended up having a strange comedic vibe to it as well.

The film follows a horror author named Roger Cobb (William Katt) who has a troubled life to say the least. He’s divorced from his TV star wife Sandy Sinclair (Kay Lenz), add to that the fact that a year or so ago his young son Jimmy (Erik & Mark Silver) suddenly vanished. Now, the elderly aunt that raised him (Susan French) has passed away, apparently by hanging herself. Roger ends up inheriting his aunt’s house and plans to spend some time there to finish his latest book about his experiences in the Vietnam War. Never mind, that this is the same house which Jimmy vanished from.

Immediately, Roger starts having trouble at the house. First he has a vision of his aunt hanging herself in one of the rooms. Then, he begins to notice some strange noises inside the closet in that room. When he opens the door, he’s attacked by what I can only describe as a demonic turd with claws. Rather than getting out of the house (hey that’s what I’d do), Roger sets up all sorts of cameras to try and capture an image of the creature. This all strikes his neighbor Harold (George Wendt) as being pretty strange, which leads to him contacting Roger’s ex-wife. Before long, Roger’s wife shows up…only to transform into a demon in a purple dress. 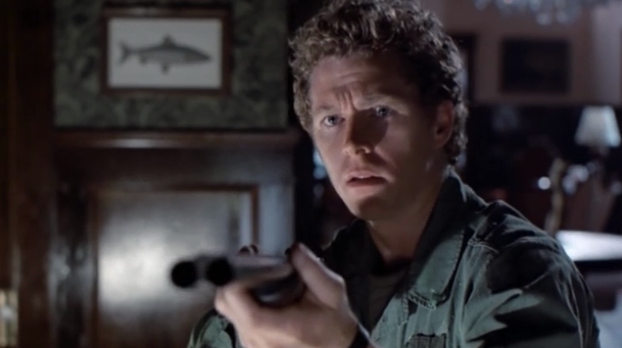 While all this craziness is going on, Roger continues to struggle with his book…which has the oh so riveting title One Man’s Story: A Personal Account of the Vietnam War. That’s got best-seller written all over it! He also continues to have flashbacks of the war, especially of a buddy who died there known as Big Ben (Richard Moll). Between all this and the various demons and possessed gardening tools that are terrorizing him in the house, it’s understandable that he’s starting to lose his mind. Eventually, though, he learns that the house appears to be a doorway to another world, maybe even be his own past, which may hold the key to the disappearance of his son.

House is a unique film. It is definitely done with tongue in cheek and has several funny moments. At the same time, the film draws its horror elements from two serious issues that were a big deal in the mid 80’s: post traumatic stress disorder in Vietnam vets and the epidemic of missing children. These aren’t subjects that you would think would work in what is essentially a horror film with a comedic twist, but it ends up working surprisingly well.

It certainly helps that William Katt seems to approach his role with a bit of a sly wink to the audience. Katt proves to be skilled in balancing both the dramatic and more comedic moments. George Wendt is also a lot of fun as the nosy neighbor and really helps set the tone, letting the audience know that we’re not to take all this too seriously. 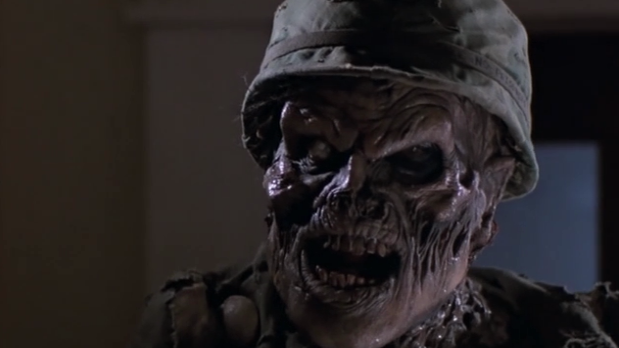 The film is rated R, but that is a bit of a stretch. There really isn’t any gore to speak of and the monsters are only somewhat scary. I mean, how scary can a demon woman with a blonde wig and a chipmunk voice be? The end sequence, with a decomposing skeleton version of Richard Moll, does have some decent scares For the most part, though, the film is a little too silly to really be scary.

House does have some problems here and there. The dopey music score really wears thin after a while, and the frequent reuse of the same low-angle shot of the exterior of the house is drinking game fodder if I ever saw it. It’s far from a great film, but it doesn’t aspire to be one either. As comedic horror films go, it ends up working quite well.