The so-called blaxploitation genre of the early 70’s was a pretty big box office draw. Under that umbrella there were action films, crime dramas, comedies, and, of course, horror films. With the success that AIP saw with Blacula in 1972, today’s movie was pretty much an inevitability. After all, Universal followed up the success of 1931’s Dracula with the release of Frankenstein, so it was the logical place to go. Yep, you guessed it, it’s 1973’s Blackenstein.

The film takes us into the world of one Dr. Stein (John Hart), a brilliant scientist and recent winner of the Nobel Prize. From his castle-like home, Stein treats an odd collection of patients, including a 90 year-old woman who looks much younger thanks to the doctor’s experiments. There is also a man who lost his legs, but has had them reattached by the good doctor. Unfortunately, one of the legs seems to have stripes like a tiger. Who said science is perfect? 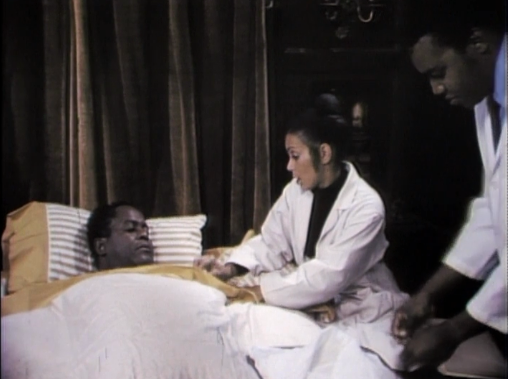 The doctor is assisted by the lovely Doctor Winifred Walker (Ivory Stone), a former student of his, and the creepy Malcomb (Roosevelt Jackson) who seems quite obsessed with Miss Walker. Too bad for him, Winifred has a fiancée named Eddie (Joe De Sue). After stepping on a landmine in Vietnam, Eddie has lost all his limbs. He spends his days in a hospital bed dealing with the racist hospital staff. When the possibility of Stein working his magic arises, Eddie consents.

The doctor begins his DNA treatment and soon the injured soldier has new arms and legs. However, as the treatments continue, Malcomb decides the time is right to confess his love for Winifred. Of course, she rejects him. Malcomb then begins his revenge by sabotaging Eddie’s DNA treatments. Soon, Eddie resembles the classic Frankenstein design, complete with a flat top afro.

Before long, Eddie is heading out at night to attack, and eat, unsuspecting victims. At first, Winifred and the doctor seem unaware of what is going on. As the body count rises, however, she begins to realize what Malcomb has done and starts to search for a way to cure poor Eddie.

Now, I admit I’m a sucker for anything related to Frankenstein. The lumbering green monster has always been my favorite. Blackenstein, however, is just plain awful. I don’t even know where to begin! The acting is beyond terrible. The performances are either flat and stilted or completely over-the-top. The later can especially be said of Bob Brophy as the nasty hospital orderly.

Visually, the film isn’t any better. Much of the film is poorly lit making it darn near impossible to even see what is going on. Other sequences suffer from poor visual composition and clumsy choices of camera angles. It all ends up coming across as very amateur hour. Viewed with the right frame of mind, Blackenstein certainly manages to create some unintentionally funny moments. Most of it, though, is just so mind-numbingly bad that I found it hard to even bring myself to crack a smile.

While Blacula is often considered a classic of the blaxpoloitation scene, Blackenstein is one of the genre’s lowest moments. I can’t even say “it’s so bad it’s good.” This is so bad that it’s almost unwatchable.