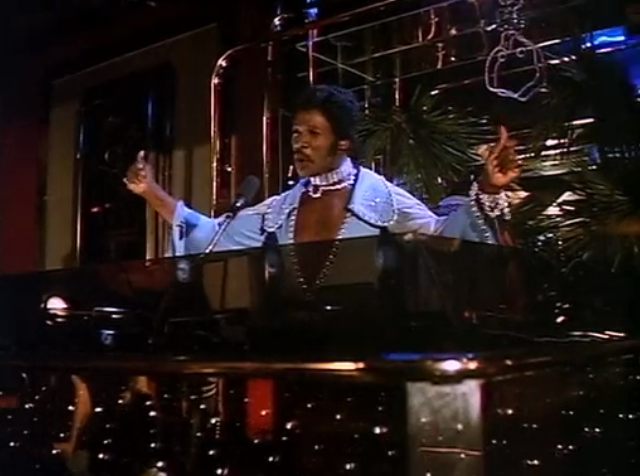 I can remember being a kid in 1979. There was a great deal of excitement over the fact that we were going to be seeing a change in the calendar. It was going to be the 80’s! As a child something that simple is rather awe-inspiring. I didn’t realize it then, but when it came to movies, music, and entertainment in general, we were on the verge of a big change. Some of the hallmarks of the decade, like disco and the blaxploitation genre, were on their way out. As if orchestrated to be one last hurrah for both of these purely 70’s entertainment styles we received today’s film…1979’s Disco Godfather.

Our story focuses on Tucker Williams (Rudy Ray Moore), also known as the Disco Godfather. He runs a disco club where he is worshipped by his loving disco followers. Though it seems that his only real skill seems to be randomly sliding the controls on the soundboard and shouting “Put yur weight on it! Put yur weight on it!” 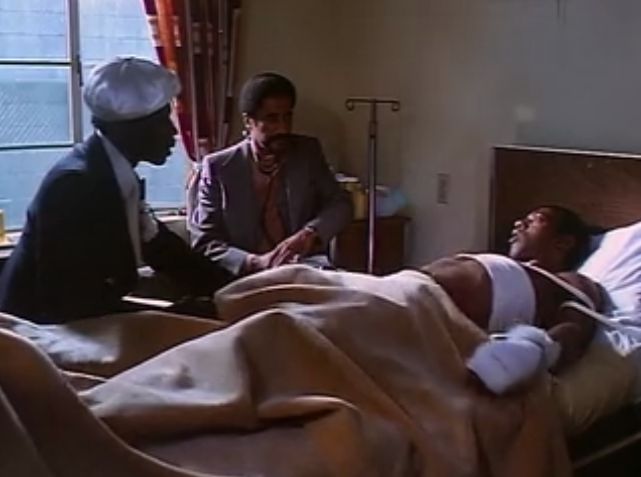 One night, everyone is gettin’ down at the club when trouble strikes. Tucker’s nephew Bucky (Julius Carry) stumbles into the club mumbling and playing an invisible basketball game. We also see that Bucky is having strange visions of a demon woman wielding a samurai sword. After talking with Bucky’s girl, Tucker finds out that Bucky is whacked out on angel dust. Luckily an “am-boo-lance” (Tucker’s words, not mine) shows up, complete with a doctor who just happens to run a center for angel dust rehab.

The next day, Tucker visits the hospital where he sees a strange collection of young people strung out on PCP…including a girl who supposedly roasted her baby and served it to her family for dinner. Yikes…thank you for keeping that off-screen. All this inspires Tucker to begin a crusade against angel dust. Now, it just so happens that Tucker is an ex-cop! So, he heads to the station and asks his old buddy the captain to give him some help with what is essentially his desire to become a vigilante against the drug dealers. Of course, the captain gives him his full support.

Tucker can’t start his vendetta, however, until after some more disco dancing. “Put yur weight on it!” However, before long he is out chasing down every possible drug dealer and junkie in the neighborhood. Oh, and did I mention that Tucker is also a kung-fu expert? This puts the pressure on the chief dealer, Morris Day look-a-like Stinger Ray (Hawthorne James…credited as James A. Hawthorne). Little does Tucker know, however, he is about to have his own run-in with the dreaded angel dust. 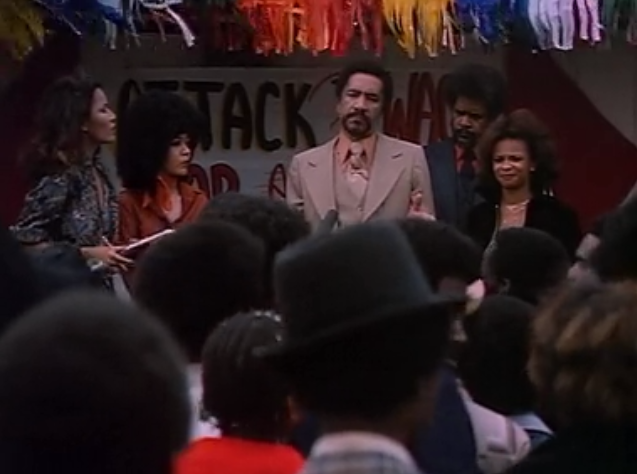 I don’t think I have laughed harder watching a movie this year than I did when watching Disco Godfather. I admit, at times I wondered if the comedy was intentional. Among the many things Rudy Ray Moore lists on his resume, one of them is stand-up comedian. So, I don’t know. Did he realize how over-the-top his bug-eyed reactions were? Did he see the comedy in his kung-fu punches missing their mark by 6 inches? My guess is that Moore and the rest of the cast are playing it 100% straight and it’s absolutely hilarious.

Disco Godfather seems to exist in its own twisted reality. It’s a world where, for no reason at all, the guy sent to kill Tucker dresses as a cowboy. It’s a place where random people just walking down the street start kung fu fighting bad guys when told they are standing outside of an angel dust factory.  A world where a guy like Rudy Ray Moore can turn a dude’s nose into a bloody pulp with one punch.

The film is gloriously sloppy. Many members of the cast struggle with their lines….chief among them Moore. The funniest word flubs, however, come during the big community rally scene where Tucker’s “Attack the Wack” campaign is being promoted. The lady who seems to be in charge mistakenly calls it “Wack the Attack” and says how they want to help people with cases of “Wack Attack.” Whuuuu?!? Many of the actors also deliver their lines looking dead on into the camera. The camera work is amateur at best, the editing is haphazard. Heck, one scene even features a cameo appearance by a microphone.

At the heart of it all is Rudy Ray Moore. Words cannot even begin to describe his bizarre performance. He spends much of the film with squinted eyes, I assume meant to show how deep and serious his character is. Then, at various moments, his eyes pop out and his mouth opens as wide as possible. It’s the expression you might expect from someone who just had a butter knife shoved under a toenail, but this is Moore’s go-to expression for even the slightest degree of emotion. This is taken to the absolute extreme during the film’s climax, where the bad guys have strapped a gas mask to Tucker’s face forcing him to breathe in angel dust fumes. The combination of the hallucinations with Moore’s over-the-top reactions makes for what may be one of the most bizarre sequences ever put on film.

As bad as Disco Godfather is, I had the time of my life watching it. I laughed out loud and uncontrollably…and did so again as I recalled it’s images for this review, writing some 24 hours after the fact. For those who find joy in cinema’s worst of the worst, Disco Godfather is required viewing. Put yur weight on it!