1990 was a big year for Winona Ryder. In just the last three months of year, she stared in three movies. One was Edward Scissorhands, which teamed her once again with her Beetejuice director Tim Burton, and also featured her then squeeze, one Johnny Depp (“Winona Forever” tattoo indeed). Then there was also Mermaids, in which she starred with Cher, fresh off her Oscar win, and a promising munchkin named Christina Ricci. But the film we’re looking at today is the forgotten film she appeared in that year…Welcome Home Roxy Carmichael.

Ryder stars as a strange 15-year old girl named Dinky Bossetti. She doesn’t really have any friends at school, she always wears black and wouldn’t know what to do with a hair brush if her life depended on it. She also doesn’t connect well with her adoptive parents (Graham Beckell & Frances Fisher). Usually she locks herself in her room to avoid any contact. Dinky also has a menagerie of stray animals that hang out with her down by the river where she is repairing a broke down old boat. Her “ark,” as she calls it. In the small town of Clyde, Ohio everyone seems to know this antisocial teen.

The town has bigger things on its mind at the moment, though. Everyone is a buzz with the news that the one and only Roxy Carmichael, who grew up in Clyde, will be returning home with a huge event to be held in her honor. Who exactly is Roxy Carmichael, and why is she so famous? We never really find out, except for the small tidbit that a famous song was written about her.

Dinky seems especially obsessed with Roxy Carmichael as the big event approaches. One day she even locks herself in Roxy’s childhood bedroom….the city gives tours of this local landmark. She also ends up spending a lot of time asking questions of local landscaper Denton Webb (Jeff Daniels) who everybody knows was Roxy’s boyfriend before she skipped town 15 years ago. He and Roxy even had a baby together, which he took to the hospital after Roxy left, hoping it would be given to a good home. You see where this is going, don’t you? As the film progresses, we see that Dinky thinks she is Roxy’s daughter and is planning on going home with her mother when she returns. Strangely, none of the town folk seem to realize that this is what’s got Dinky acting so strange. The idealistic young guidance counselor, Miss Zaks (Laila Robins), who befriends Dinky and helps her pretty up a bit doesn’t pick up on it. Neither does the popular boy, Gerald (Thomas Wilson Brown), who takes an interest in her. What will happen on the night Roxy Carmichael returns?

Welcome Home, Roxy Carmichael was directed by Jim Abrahams, one-third of the Zucker/Abrahams/Zucker team that created such films as Airplane! and Top Secret. Even after the trio went off in their own filmmaking directions, Abrahams has continued to stick with the crazy comedies, directing the likes of Hot Shots and Jane Austin’s Mafia! Roxy Carmichael was his one real move away from those type of films. It’s what many would call a “dramedy.” It certainly has its funny moments, but this story of a confused young teen is a bit heavy at times, as well.

What really hold the movie together is Winona Ryder’s performance. Probably just about everyone either knew a Dinky or was one themselves and Ryder is completely believable as the misanthropic teen. There’s also a wonderful awkward sweetness to her gradual transformation as the film progresses. The scene where she fumbles to talk with Gerald as he browses through some comic books at the local drugstore will actually resonate with just about any young man who ever struggled to find the words when talking to the girl of his dreams. By the time Ryder puts on a pink dress for the big Roxy Carmichael ceremony, I was completely in love with her. The script does have a few slightly off moments for her character…the scene in which she speaks out about how much she admires Miss Zaks’ breasts and wonders aloud if hers will ever be that nice kind of sticks out like a sore thumb. On a whole, though, Dinky is a very genuine teenage character. 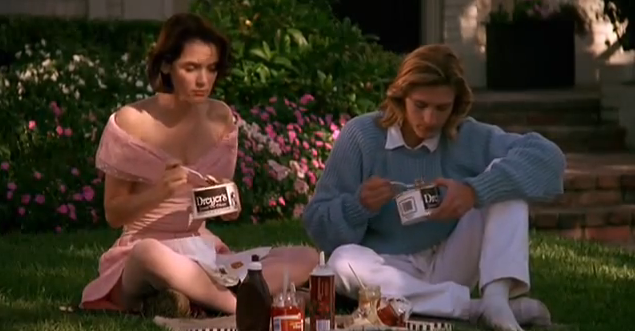 As much as I adored Ryder in this film, it does still have its share of problems. The biggest problem is that many of the supporting characters come across as silly cartoon characters. Jeff Daniels is quite good in the film and Laila Robins is also solid, but many of the other characters just don’t seem real. It’s another one of these cases of a film about small-town folks that feels like it must’ve been made by people who haven’t been out of Hollywood for decades. The overuse of Melissa Etheridge songs on the soundtrack also wears a bit thin by the time we reach the end credits.

Welcome Home, Roxy Carmichael will never be listed among the highlights of Winona Ryder’s career. Her performance in it is wonderful, but it is an uneven film to say the least. Still, if I had to make a case for why I had a crush on Winona Ryder when I was a teenager, this would be exhibit A.