If there is one thing the Hollywood has taught us it’s that you don’t need to be an actor to end up staring in a movie. Look at Johnny Weissmuller, he was an Olympic swimmer and they turned him into Tarzan. Audie Murphy was the most decorated soldier of World War II and they made him into a big box office star too! Today our film features Dick Clark; a famous guy, host of American Bandstand and all, but not an actor. In 1968, however, he produced and starred in a crime drama from our pals at AIP…Killers Three.

Our story begins with Johnny Ward (Bruce Walker Jr.), a former G.I. living in rural North Carolina with his wife Carol (Diane Varsi) and young son Tony (Tony York). Things are tough for Johnny, but he’s got big plans, which is why he’s invited his old army buddy Roger (Dick Clark) to visit. Johnny knows that his employer, who runs a local store, has a bootlegging gig on the side. He also knows that there is $250,000 sittin’ in the store’s safe. With Roger’s background using explosives in the war, he’s the perfect man to help Johnny get his hands on the dough.

They decide to pull the robbery on the day of a big town picnic. Everyone will be there. During the festivities, they sneak off and disable all the cars at the picnic. Then they head to the store to blow the safe. Turns out, Roger’s concoction ends up being much stronger than they thought. The safe gets blown into the floor and they can’t get the money out. What’s worse, Johnny shoots and kills a federal agent (there to nab bootleggers) on the way out.

Now Johnny, Roger, Carol and little Tony are on the run across the south with the body count rising. They decide to make their way to California, but that’s not going to be easy. Police are sent out in force to try and stop them, including Carol’s brother Charlie (Merle Haggard). When Charlie encounters the gang at a diner, he takes pity on his sister and gives them a chance to flee. Unfortunately, Roger, who doesn’t recognize Carol’s brother, guns him down. Soon it becomes apparent that a violent end is in store for the gang. 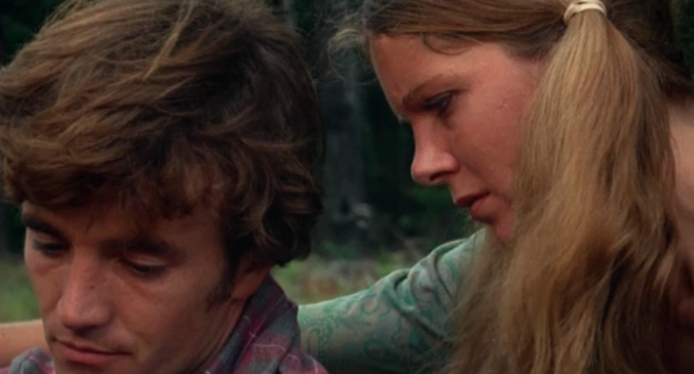 Obviously, AIP was trying to capitalize on the success of Bonnie and Clyde, which was released the previous year. It’s fairly bloody and violent, certainly not what we associate with the squeaky clean image Dick Clark tended to have. The premise, though not terribly original, does have some degree of promise. The main problem with the film, however, is that it just takes so dang long for anything to happen. We are literally 45 minutes into the film before the attempted robbery happens. What leads up to that is as boring as possible.

It doesn’t help that the whole thing is made somewhat comical by the ridiculous music provided by Merle Haggard. It’s one of those ballads that tells the story of the film as we’re watching it. Like it’s some sort of folk tale passed down through the ages. It’s so sappy, though, that it becomes unintentionally funny. I think I audibly groaned every time the music kicked in again…which is often.

Dick Clark may have been a television icon, but he only had a handful of movie acting gigs. It’s easy to see why in this film. He’s just not quite cut out for it. Granted, his character is supposed to be somewhat of an awkward, insecure guy…but he practically sleepwalks his way through this role. When the character does begin to change into a much more bloodthirsty and sinister creature, Clark’s portrayal doesn’t quite go far enough. It’s just not convincing. The other actors don’t really do much to make their characters interesting either. I also can’t help but feel a little bad for the young actor playing Tony, his voice having been clearly overdubbed by an adult female trying to do a young boy’s voice. Remember the creepy voice that was dubbed in for young Alicia Witt in David Lynch’s Dune? It’s a lot like that.

Killers Three does manage to feature a few good moments of shoot-em-up action. Unfortunately, by the time that happens the audience has already been lost. I wish I could say that the film “had a good beat and you can dance to it,” but sadly no. That’s an American Bandstand reference there youngsters…Google it.