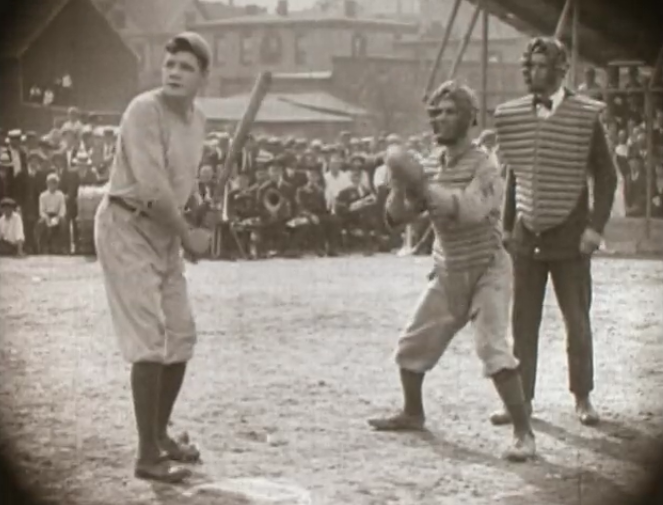 Baseball players as actors!?!? Sure, why not? Who wouldn’t want to see their favorite big league star up there on the big-screen. And if you’re going to try and turn a baseball player into a movie star, why not start with the biggest of all time. Ladies and gentleman, I give you the one and only George Herman Ruth, the Babe himself, in 1920’s Headin’ Home.

In the small town of Haverlock, the young Babe Ruth lives with his dear old mother (Margaret Seddon) and little sister, Pigtails (Frances Victory). When he isn’t chopping down trees he can whittle into baseball bats, the Babe takes to rescuing his sisters’ dog from frequent run-ins with the local dog catcher. But the Babe dreams of playing ball on the local team.

The manager of the town team has no time for Babe, especially since a cocky young hurler (William Sheer) has joined the team. He also happens to be cuddling up with the girl Babe has the hots for, Mildred (Ruth Taylor). Babe’s big break comes on the day of the big game against a rival town. The opposing team’s star player gets a bit too tipsy, so their manager recruits Babe to fill in. During the game, Babe struggles at first, but ends up winning the game with a towering shot. He then gets chased off by the local fans, upset that he won the game for the other team. Before long, the young slugger works his way up to the majors and superstardom. What a heartwarming little story of a small town boy becoming the greatest player baseball has ever seen! Problem is, it’s a lie from front to back. About the only thing in this movie that is true is that there was once a baseball player named Babe Ruth. He wasn’t from a small town, he was from Baltimore. Babe spent most of his youth in a reform school, not with his silver-haired mother and little Pigtails. When the Babe did break into the majors, it wasn’t as a slugger…it was as a pitcher. Anyone familiar with just the basics of Ruth’s biography will find the movie’s abundance of inaccuracies downright hilarious. 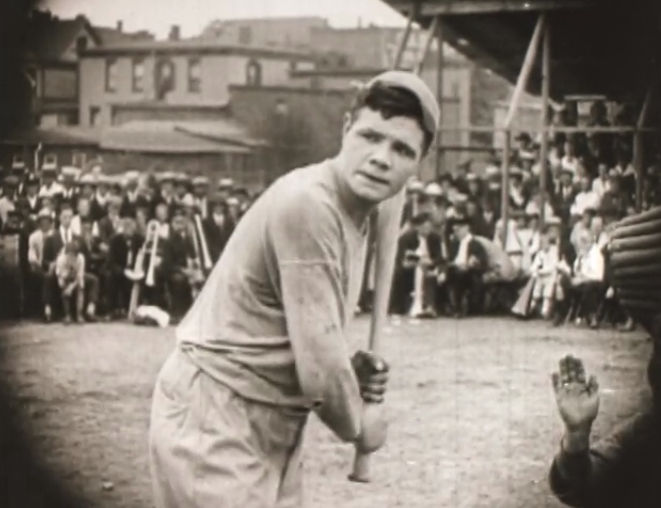 The film may have absolutely no basis in historical facts, but the film is not without its charms. The story is goofy, but there is slight sweetness to it. The film’s depiction of small town baseball clubs and the town spirit that surrounded them is very interesting. The whole town turns out for a big parade! There’s even special seating at the game for all the crippled kids right down front. It may be a bit goofy at times, but the game sequence has a fun atmosphere to it.

So…how is the Bambino as an actor? Well, this is a silent film, so he’s got that working in his favor. Actually, the fact that Babe is not exactly in his element means that he is not prone to the wild-eyed exaggerated expressions and gestures that often plague silent films. In general, though, as an actor the Babe was a heck of a ballplayer. That’s the way it should be.