On June 29, 1967 actress Jayne Mansfield died in a tragic car accident at the age of 34. She was one of the most iconic of the 50’s blonde bombshells. Though there’s no denying her on-screen appeal, I’ve never considered Mansfield to be as strong an actress as some of the other blonde bombshells. Her final film, though, stretched her acting abilities in a way that many of her previous films had not. Released a year after her death, it’s 1968’s Single Room Furnished.

The film begins in a very unusual fashion, with newspaper reporter Walter Winchell telling the audience what a great final performance from Mansfield we are about to see. This actually has the reverse effect of what I think the producers had hoped, causing the audience to scrutinize Mansfield’s performance even more to see if it matches up to Winchell’s praise.

The film then takes us to a New York City apartment building where a young woman named Maria (Terri Messina) often argues with her overbearing mother. On this particular day, Maria’s mother expresses her disapproval of her daughter’s friendship with another tenant of the building, a prostitute named Eileen. After Maria storms out she encounters Pop (Billy M Greene) who starts to tell Maria stories of previous tenants of the building. 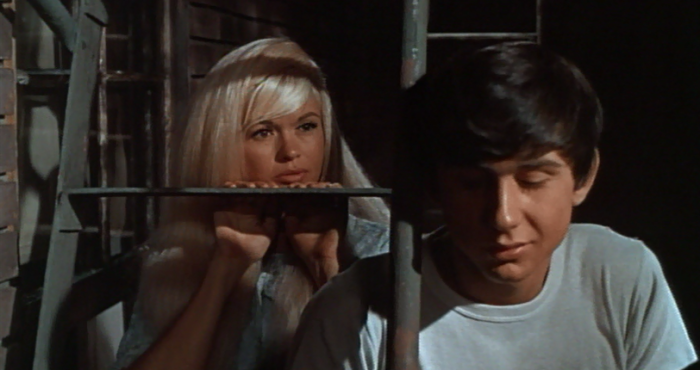 First he tells her about a young couple, Frankie (Martin Horsey) and Johnnie (Mansfield). These two met at a local dance (which we see as a flashback within the flashback), then get married, and basically grow bored with each other. The two sit out on the fire escape talking about…well…nothing important. And then they talk some more and then they talk some more…and nothing really happens. Pops then explains that the two split up and Johnnie changed her name to Mae and stayed in the building. 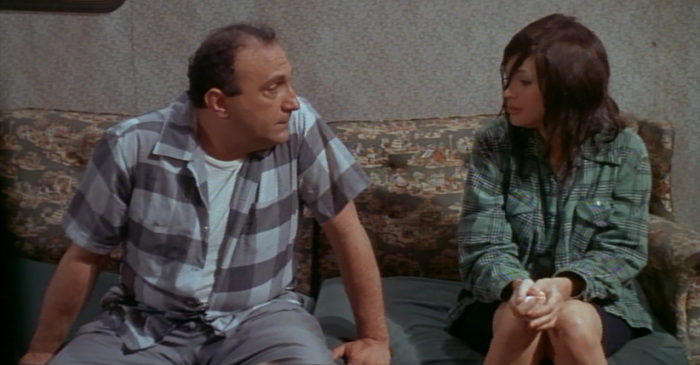 Then pops weaves the story of another couple, Flo (Dorothy Keller) and Charley (Fabian Dean). We see them start to become romantically involved, but then Mae (Mansfield, now with a black wig), stops by and spills her guts to Charley that she is pregnant without the father around. So good-hearted Charley asks her to marry him. But he changes his mind, marries Flo, and the next thing we know Mae is now the prostitute Eileen (still Mansfield…blonde again). Now we are treated to a long scene where she talks with a guy named Billy (Walter Gregg) who desperately wants to marry her.

Single Room Furnished was based on a play and it shows. Nothing really happens during the film, there’s just a lot talking. Now don’t get me wrong, I’m not saying you have to have car chases or blow up Death Stars to have a good movie. You can have the actors talk till their tongues fall out for all I care, but it’s nice if there’s a point to the whole thing. In this film, however, everything feels so disjointed. The way the story, if we can call it that, is structured is poorly laid out…with flashback upon flashback upon flashback. It also doesn’t help that the dialogue is about as pretentious as they come.

The middle section of the film, where we focus on Flo and Charley, especially sticks out like a sore thumb. We spend a good 15 to 20 minutes without any sign of Jayne Mansfield. It takes way too long for the connection between these two and Mansfield’s character to present itself. The sad part is, Flo and Charley are probably the most interesting characters in film. The whole movie should’ve just been about them.

Despite the big problems with story and general structure of the film, I was pleasantly surprised with Jayne Mansfield’s performance…or should I say “performances.” She is essentially playing three different characters, even though it is the same woman reinventing herself over time. She changes her look, her voice, her demeanor…it’s actually quite effective. Though the film doesn’t really say so, by the end of the film I saw Mansfield’s character as a person with a multiple personality disorder. By the time she starts calling her boyfriend “MONKEY!!” toward the end of the film, it becomes pretty obvious that there’s something wrong with her.

I guess Mr. Winchell’s introduction for Single Room Furnished ends up having some degree of truth to it. I do think this is one of Jayne Mansfield’s stronger performances, at least when it comes to drama. It’s just too bad that it’s done in the service of a script that’s so corny and pointless.