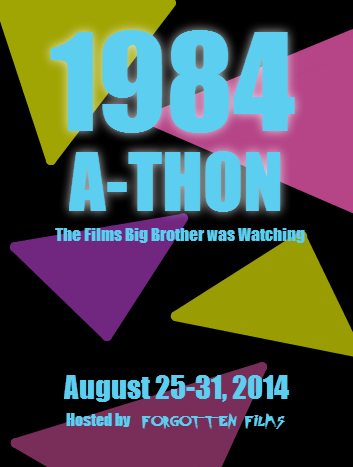 You’ve been waiting all summer, but now the time is finally here! The 1984-a-Thon begins tomorrow!

I have long held the belief that 1984 is the greatest of all movie years. Since this year is the 30th anniversary of 84, it seemed like the perfect time to celebrate these movies. I was absolutely blown away by the number of bloggers and podcasters who enthusiastically signed up to review films. At last count 115 bloggers are scheduled to contribute with over 130 films being covered. Just about every major film from 1984 is due to be reviewed, and a bunch of not-so-major ones as well. There are some holes…I just couldn’t get anyone brave enough to review Bo Derek’s Bolero. However, if you are a blogger and would like to jump in here at the last minute, you are welcome to participate. Simply look over the list of movies that have not been selected (here) and e-mail me with your choice. As long as you can have your review posted sometime this week (Aug 25-31) you’re in!

Be sure to check in here each day for links to the reviews. A number of reviews will be released each day. When you visit the other sites, be sure to comment, like, Tweet and do all those things that show these bloggers that you appreciate their contributions to the blog-a-thon. The hashtag #84athon is being used over on Twitter to promote the event.

Here at Forgotten Films, I will be reviewing a ton of films from 1984 that have faded from most people’s memories. Strangely, as the one who believes 84 to be the greatest movie year, I will be reviewing the films that don’t necessarily support that argument. Some are overlooked gems and some may deserve their status as “forgotten” films.

So strap on a proton pack, turn things up to eleven, and watch out for Cobra Kai members who want to “sweep the leg.” The 1984-a-thon is here!