When the Beatles starred in A Hard Day’s Night in 1964 they moved beyond being music stars to being legitimate movie stars, as well. There was no denying their unique on-screen charisma. The film is rightly considered one of the great music-centered films of all time. Fast forward 20 years. The Beatles were no more, but could one of them make a triumphant return to movie screens? Paul McCartney was more than willing to accept the challenge, writing and starring in 1984’s Give My Regards to Broad Street.

McCartney plays himself in the midst of creating a new album. In fact, the master tapes have just been finished. Unfortunately, they were trusted to the care of an ex-con member of McCartney’s crew named Harry (Ian Hastings). A day later, nobody knows the whereabouts of Harry or, more importantly, the tapes. Paul’s manager, Steve (Bryan Brown), is getting nervous. After all, several sinister looking money men are looming to pull the plug. 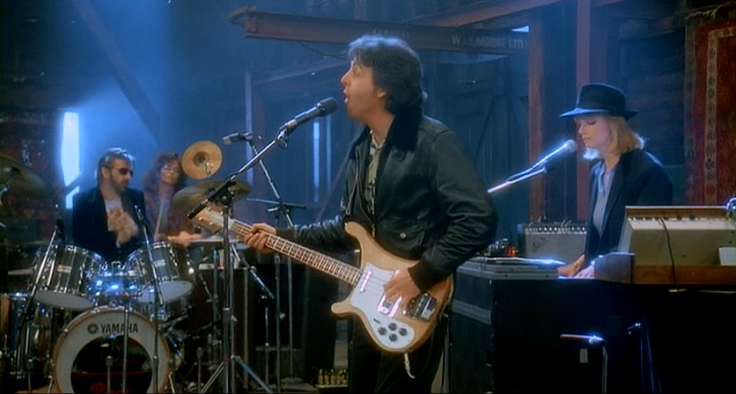 Paul is unfazed, however, and goes about his busy routine. This includes gathering his band, which includes his wife Linda and Beatle drummer Ringo Starr, for several rehearsals. They spend some time playing in the studio as well as in an old warehouse…’cuz that’s where all rockstars rehearse. There are also a few rehearsals for video shoots. One is for the song “Ballroom Dancing” which has a big dancehall feel with a few rejects from Grease causing trouble. There’s also a very strange take on McCartney’s tune “Silly Love Songs” where he and the band wear Ziggy Stardust style makeup and hairdos for no apparent reason.

Eventually, Paul tries to get to the bottom of the missing tapes…though somewhat half-heartedly I’d say. He tries to get some help from Harry’s blubbering girlfriend (Tracey Ullman), but she’s no help. He then slips into a strange fantasy sequence where he is chasing down the bright blue glowing tape case in a Victorian setting. He also pays a visit to Ralph Richardson, who literally brings nothing to the proceedings before tracking down Harry at a train station. Of course, there are many songs along the way. There are several new tracks, including the hit “No More Lonely Nights,” as well as several classics from McCartney’s solo career as well as his time with the Beatles. “Yesterday,” “Here, There, and Everywhere,” “Eleanor Rigby,” and “The Long and Winding Road” all put in appearances.

Have you figured out by now that this movie is a mess? One thing that I didn’t mention is that the movie actually starts with McCartney daydreaming in the back of his limo on a rainy day. So everything I just described is a dream sequence. That means that we have dream sequences within dream sequences!?! I guess it’s kind of appropriate considering that McCartney spends much of the film looking droopy-eyed and half-asleep. It’s a long way from the energy that he and the other three lads from Liverpool displayed in their first movie outing. 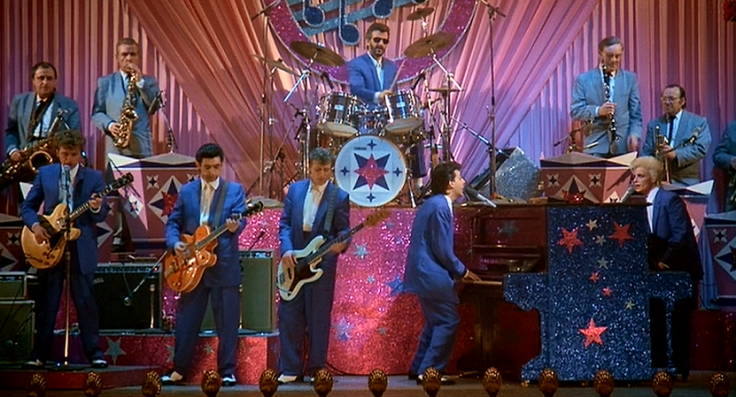 I think one of the biggest problems with the film is that it is lacking in originality. There are moments when it seems like McCartney was going for the day-in-the-life feel of A Hard Day’s Night. At other times it seems like he’s going for the quirkiness of Help! Just the fact that so much of the soundtrack is made up of old songs makes one wonder why Sir Paul couldn’t come up with something new. Don’t get me wrong, the old songs in this film are classics, but if anyone had the potential to bring some creative new musical ideas to the screen it’s Paul McCartney! The few moments where he does try to do something new and different make no sense whatsoever. The whole Victorian era sequence is just plain weird. The biggest head-scratcher, though, is the bit with the David Bowie makeup. That’s just not Paul McCartney, and if it was meant as parody it falls flat on its face. 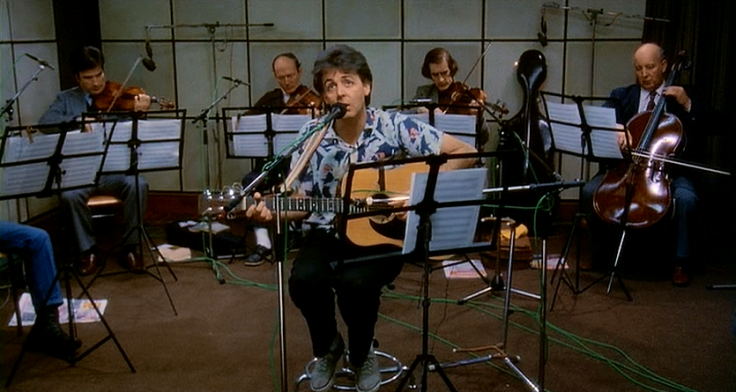 In many ways this film feels like a series of music videos. That’s somewhat understandable considering this film came out at the height of the MTV era. However, only a few of songs are accompanied by music video style imagery. Many of the songs are simply McCartney and his band mates standing there and playing. During the scene where they rehearse in a warehouse we’re given three songs, back to back to back. Again, great music but there’s nothing cinematic in how they are presented. I think McCartney may have been better served presenting this as a concert film. Of course, McCartney had already done one of those just four years earlier with Rockshow. Still would any sane person say that if you’d seen one Paul McCartney concert you’d seen them all?

There is a lot to like about Give My Regards to Broad Street from a musical standpoint, but you can achieve that by buying the CD. Cinematically the film is bland and uninspired. Stick with A Hard Day’s Night.