One of the legacies of 1984 was that it was the beginning stages of the rise of a group of young actors who would come to be known as the “Brat Pack.” At the forefront of this group was Rob Lowe. In 83 he had some success with films like The Outsiders and Class, but 84 would see him head across the pond, along with fellow Brat Packer Ally Sheedy, to play a crafty American who wiggles his way into an elite British university in Oxford Blues. 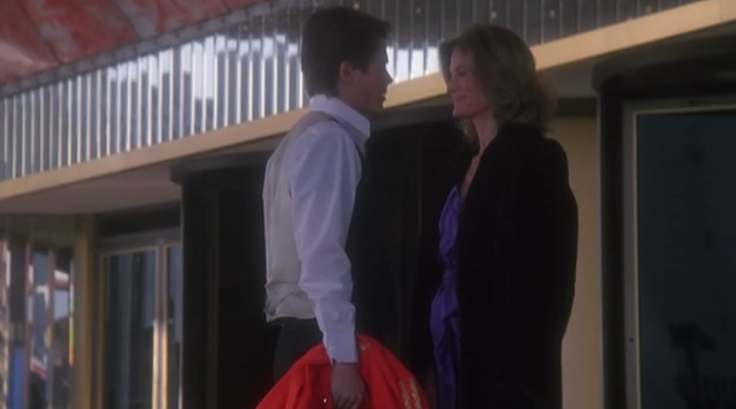 Lowe plays Nick Di’ Angelo, a young man who has been working as a parking attendant at a Las Vegas casino since graduating from high school a year ago. His goal is very simple, to raise enough money to fund a year at Oxford University. Now, Nick’s grades are solid enough to get in, though he’s kind of far down on the waiting list. He pays a computer savvy pal to bump him up a few notches, however he’s still quite a bit short in the money department. That is remedied when he ends up catching the eye of an older woman (Gail Strickland) staying at the casino. He ends up leaving her car in the hands of his coworker (played by Muppet puppeteer Richard Hunt) and heading up to her hotel room. She is so impressed with his sexual prowess that she gives him the money he needs…and her car. So now he’s off to Oxford.

Now, the reason that Nick wants to go to Oxford in the first place is to pursue the lovely young Lady Victoria Wingate (Amanda Pays)…royal, favorite subject of the tabloids, and new student at the university. Too bad for him she’s already attached to pompous rowing star Colin Gilchrist Fisher (Julian Sands). Nick knows a thing or two about rowing himself, though, having done some in high school. He ends up being accepted on one of the best teams. His one American friend on the campus, Rona (Sheedy), is also involved with the team as a mascot of sorts. I don’t know what her title is! She sits at the front of the boat and yells at the rowers. It’s British, I guess.

Over time, Nick does manage to get cozy with Lady Victoria, but when he’d rather keep snuggling with her under the covers rather than show up for an important match (or whatever you call a rowing competition) he gets kicked off the team. Several run ins with Colin and his mates, including Carey Elwes, gets Nick kicked out of school in all togther. Sill, Colin realizes that Nick is one of the most skilled rowers on campus and recruits him to help avenge a 25 year-old defeat to Harvard. Oxford Blues is not in the upper echelon of the 80’s Brat Pack films, but I found it to be quite entertaining, though somewhat half-baked at times. Rob Lowe is a good choice for this role. Putting his cocky, smirking persona against the prim and proper of Oxford is a good formula. However, having him come from Vegas did not seem as strong an element of his character’s background. It might have been more effective to have him be from New York or the south side of Chicago. A bit more rough and street-smart, if you catch my drift. Still, he’s a good match for the likes of Julian Sands who just revels in trying to put this headstrong American in his place. I also enjoyed Carey Elwes’ as a weasely cohort of Sands’.

The ladies in the film, though both fairly strong, suffer from needing a bit more development. Amanda Pays as Victoria does a solid job but her character lacked depth. Her hooking up with Nick comes rather suddenly and there is little indication of what exactly she see’s in him…other than the fact that he’s Rob Lowe, the face that would grace Tiger Beat covers for the next few years. Ally Sheedy has always been one of my favorites of the 80’s teen stars, but she is a bit underused here. From her introduction we know that she has her eye on Nick, but there’s not much in the way of romantic sparks, and when Nick’s romantic interest shifts from Victoria to her it ends up being very abrupt. I also can’t quite shake the thought that her character really should’ve been British.

Probably the strongest element of the film is just the whole fish-out-of-water scenario of an American at Oxford. It is fun seeing Lowe struggle with acclimating himself to the most British of British environments. I admit to being a bit behind on the learning curve myself with this one as there were several things that I could’ve stood for a little more explanation of. What can I say, I’m American.

Though there are many aspects of Oxford Blues I think could’ve been developed better, as it is the film is still an enjoyable 80’s teen film. Just don’t ask me to explain the intricacies of the sport of rowing, ‘cause I still don’t have a clue.