I think I first heard of Keanu Reeves in 1989 with the release of Bill and Ted’s Excellent Adventure. He had been in a handful of other films in the years leading up to his time travel adventure, but this was his first real hit. It was also a major contributing factor to many people always thinking of him as a bit of a surfer dude. A year before Bill and Ted, however, someone saw fit to cast him as more of a geek in 1988’s The Night Before.

As the film opens we are introduced to Winston Connelly (Reeves), an awkward high school student on prom night. He’s dressed in his bright blue tux, unfortunately, he’s nowhere near the prom. He’s stuck in the inner city with no money, no car, and he’s lost his date, Tara (Lori Loughlin). A large portion of the first half of the movie takes place in a series of flashbacks. We see how Winston only landed his date with the popular Tara because she lost a bet, the penalty for which was to go to the prom with a nerd. We also see Winston meet Tara’s protective cop dad (Michael Greene). Then we see how Winston managed to get the couple lost on the way to the prom. The two then end up in a seedy bar. However, the band at the establishment is led by the likes of George Clinton and Bootsy Collins, so it ain’t all bad.

When Winston returns to the empty bar, remember what we just saw was a flashback, he gets some help from a waitress he met earlier named Rhonda (Theresa Saldana) who helps him piece things together. It turns out that in a semi-drunken state, Winston accidentally sold Tara to a pimp named Tito (Trinidad Silva). Now Winston needs to get her back, but it turns out that she has been swapped by several nasty characters throughout the night. However, Winston is able to rescue her from a seedy hotel where she’s handcuffed to a bed. All that remains now is a final showdown with Tito and his gang. 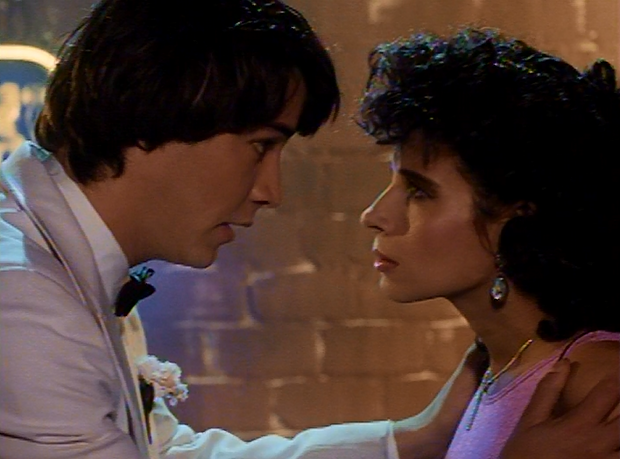 The Night Before definitely takes some time to hit its stride. The abundance of flashbacks in the first half of the film is very confusing at first. In the first 20 minutes or so I wondered if Winston was actually “unstuck in time” Slaughterhouse Five style because it just wasn’t clear what I was watching. The film ends up abandoning the flashback format about halfway through, so I’m not sure why the writers even felt the need to go there in the first place. The film would’ve played out perfectly well were it done with a more linear structure from the start. Once the film drops the flashback gimmick it actually becomes much more entertaining. In some ways the film feels a bit like a teen version of Martin Scorsese’s 1985 film After Hours.

The film does manage a few mildly comedic moments, however as the film progresses it does try to pull laughs from some pretty dark places. For example, when Winston goes to rescue Tara he finds her in her underwear, handcuffed to a bed frame, about to be raped by a fat man before he sells her into sexual slavery in another country. Not exactly a scenario I would say has high potential for comedy gold. Though all you Full House fans who crushed on Aunt Becky will probably relish the opportunity to see her in her skivvies.

Despite the problems with the story, the cast does a solid job and helps keep the audience at least somewhat invested. It is interesting to note that both Reeves and Loughlin are playing against type, and pull it off pretty well. Reeves made more of a name for himself as the surfer dude type, so it’s unusual to see him as the vice president of the astronomy club. As for Loughlin, I’ve always thought of her as one of the ultimate 80’s nice girls. It’s a little strange to see her as a mean girl, but she makes it work and still manages to soften a bit by the end of the flick.

The Night Before is far from standing alongside the films that reside in the pantheon of 80’s teen movies. It tries some unique storytelling techniques and ends up struggling a bit. It still ends up being mildly entertaining with some nice performances from the leads. And hey, it’s got funky George Clinton music…what’s not to like about that?

One thought on “The Night Before”