It should no longer come as a surprise to us when Hollywood tries to turn just about anything that had a smidgen of success into a movie. You’ve got a popular video game…hey, we can turn that into a movie! Board game…there’s a movie there somewhere! Young pop star who only acted in her 2nd grade production of The Three Little Pigs as a tree…let’s make her a movie star! So today we see what happens when someone decides to make a movie based on a series of prank call comedy albums. Throughout the 1990’s a New York based comedy team known as The Jerky Boys released a string of albums where they prank called unsuspecting people. So in 1995, at the height of their success, they unleashed a big screen adventure called, what else, The Jerky Boys.

These so-called “boys” are Johnny B. (John Brennan) and Kamal (Kamal Ahmed). They are a couple of self-described low-lifes from Queens who don’t put getting steady jobs high on the priority list, but spend much of their time making prank calls. One day they run in to Brett Weir (James Lorinz), a guy they knew as a kid. He is boasting about how successful he is and that he’s about to go to a restaurant for a big meeting. The boys then decide to call the restaurant with Johnny posing as a guy named “Frank Rizzo” from Chicago. He says his men are on the way and that they need to be treated with respect. This is all so they can one-up Brett, but what they don’t realize is that the folks they’re talking to on the phone are mob goons (including Vincent Pastore…”Big Pussy” from The Sopranos). This all concerns mob boss Ernie Lazzaro (Alan Arkin), who thinks Rizzo is an actual gangster. The boys manage to pull off posing as mob goons from Chicago for a while, but soon Lazzaro gets wise to their scheme. The boys get captured, but then manage an escape by repelling out a window using strings of sausages (!?!?). For most of the rest of the film they’re on the run. They duck into a rock club where Ozzy Osbourne plays the band manager, Kamal poses as a turban-wearing cab driver, and they hijack a magic show. In the end, they have to use their vocal talents to save themselves and get Lazzaro and his goons locked up. 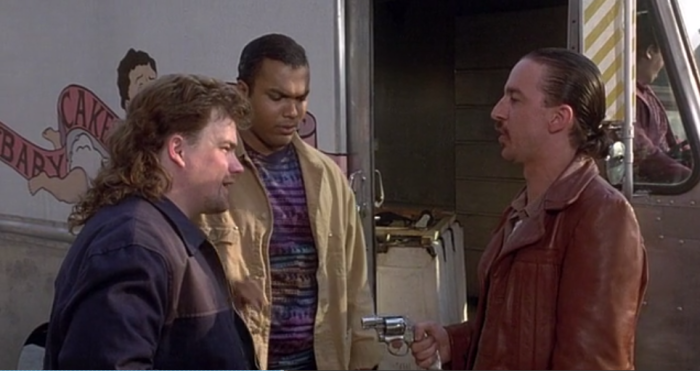 I was familiar with the Jerky Boys prior to seeing this movie, but I’d never heard their act before. After watching this film I decided to do my due diligence to see what their schtick was all about. I’m still trying to figure these guys out. I’ve listened to several of their bits, watched their feature film, and so help me God I haven’t laughed yet! Prank calls can be funny, but all we get here is a lot of yelling in a goofy voice. The story, if we can call it that, makes no sense whatsoever. I can’t say I’m surprised. I mean think about it, this is a movie centered on a couple of prank callers. In order to have them do their schtick, the writers had to make sure that our lead characters spent good portions of the film talking over the phone, or intercoms, or CB’s, or answering machines, or whatever! Wow, let me contain my excitement for a moment. I mean just imagine how much better last year’s Best Picture winner, Birdman, would’ve been if only Michael Keaton had had more scenes where he was on the phone!?!

One of the biggest problems with the film is that the two lead characters are thoroughly unlikable. Johnny B. comes across as an angry version of Bowery Boy Leo Gorcey, and looks like Sean Astin with a mullet. Meanwhile Kamal seems to have very little in the way of personality and essentially follows Johnny B. around like a puppy for most of the film. Neither one is funny, neither one endears themselves to the audience; they just come across as jerks. The rest of the cast doesn’t do a whole lot better. Poor Alan Arkin knows he doesn’t belong in this flick, phoning in his performance (and rightfully so).

So, much like board games that involve sinking battleships, comedy prank call albums do not make the transition to feature films terribly well. As if anyone ever thought the opposite was true. The only moment of enjoyment I had was when I recognized future CSI star Jorja Fox in a small role as Arkin’s girl. Oh, Alan Arkin what were you thinking? That better have been a nice paycheck there, pal!

8 thoughts on “The Jerky Boys”