Putting classic comedy teams up against movie monsters has been a popular movie formula. Probably the most famous example is the 1948 classic Abbott and Costello Meet Frankenstein. They would later meet the Mummy and the Invisible Man in other films. Another comedy team that would meet up with monsters in several films were the Bowery Boys. When they were known as the East Side Kids they appeared in such spooky comedies as Spooks Run Wild and Ghosts on the Loose. By the 1950’s the team had gone through a variety of personnel changes, but they were still ready to face some ghouls in 1954’s The Bowery Boys meet the Monsters. 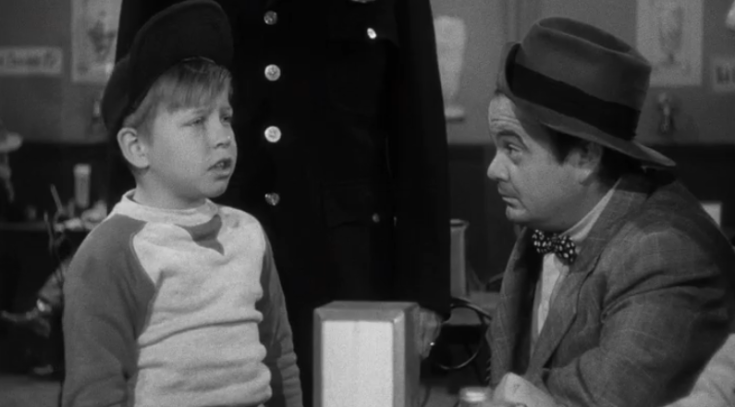 As this installment begins, the boys’ favorite hangout, Louie’s Sweet Shop, is suffering from many broken windows due to the kids playing baseball in the street. However, the always resourceful Slip (Leo Gorcey) and Sach (Huntz Hall) have the idea that a nearby lot would be a better place for the kids to hold their games. All they need to do is contact the owners and get permission. When they call, they get invited out to the owners’ home to discuss things in person.

So, Slip and Sach head out to Long Island on a stormy night to visit the spooky home of the owners…the Gravesend family. Now, this family is a weird bunch and they really don’t care much about some lot they own back in the Bowery. However, each family member has their own agenda which Slip and Sach could come in handy for. Dereck Gravesend (John Dehner) is a mad scientist who wants a brain to transplant into a gorilla. Anton Gravesend (Lloyd Corrigan) doesn’t just want a brain, he wants a whole head to pop onto his clumsy robot, Gorog. Their sister Amelia (Ellen Corby) has a flesh-eating plant in the hallway that needs a fresh meal, and then there’s niece Francine (Laura Mason) who is a vampire. There’s also the strange butler Grissom (Paul Wexler), who often serves as a test subject for Anton…which includes drinking a Jekyll and Hyde type potion.

After a brief discussion about the vacant lot, the family convinces Slip and Sach to spend the night in the house rather than brave the wet roads. Of course, as the night progresses, the boys must deal with the various monsters, gorillas, and robots around the house. The next morning, when they fail to make it home, Louie (Bernard Gorcey), Chuck (David Gorcey), and Butch (Bennie Bartlett) decide to head for the house to find their pals. More monster madness follows, culminating in Sach becoming a crazed monster when he drinks some of Anton’s potion.

Of all the Bowery Boys films I’ve seen, this one is definitely the most outlandish. Usually, even though the boys go through some crazy scenarios, there is at least one foot still in the real world. I don’t know that I can say that about The Bowery Boys meet the Monsters. I don’t blame them for doing the spooky house bit again. It certainly worked for them several times in the past. In some ways, though, there’s almost too much going on in this one. I mean we have a monster, a couple of mad scientists, a vampire woman, a gorilla, a man-eating tree, and a robot. The film is only 65 minutes long! That’s a lot to squeeze in. Plus, way too much time is spent with what I would consider to be the two weakest elements: the gorilla and the robot. Gorillas were often used as monsters in cheap-o productions. I guess every studio had a gorilla suit. It seems an odd thing to put so much emphasis on, though, when you’ve got a sexy female vampire who ends up underused. As for the robot, it was clearly an attempt to capitalize on the interest in sci-fi that came in the 50’s. Sadly, though, the robot is clunky and just doesn’t belong with a group of monsters.

In most of the Bowery Boys films I’ve seen, Leo Gorcey tends to be the central character. However, there is always a bunch of other gang members backing him up. In this entry the membership of the Bowery Boys seems to be dwindling. Huntz Hall is still there, of course, and actually gets almost equal screen time with Gorcey in this outing. However, gone are other regulars like Bobby Jordan and Gabriel Dell. With only two other members of the gang (David Gorcey and Bennie Bartlett) they have to recruit shop owner Louie to join in the hijinks. Not that I have a problem with poor old Louie, but the feeling of camaraderie I got from the boys in previous installments is just not quite there. Plus, it really bothered me that the boys are all wearing suits throughout this film. I never thought of the Bowery Boys as suit-wearing types.

Even with all the problems in this film, Leo Gorcey is still a joy to watch. Slip is just a fun character and his butchering of the English language is priceless. I wish I could heap similar praise on Huntz Hall. In other Bowery Boys films I’ve seen, Hall makes a great sidekick for Gorcey. He’s usually very likeable, but I found him somewhat annoying this time around. Sach comes across as a fumbling, sputtering, bug-eyed goof in this one, which is not the feel I’ve gotten from some of the other Bowery Boys films I’ve seen. I like the Sach from the older films better.

There is still some fun to have with The Bowery Boys meet the Monsters, but it definitely struggles. Leo Gorcey’s twisted wordplay is inspired and the monsters provide a few fun moments. On a whole, though, this is definitely the weakest Bowery Boys movie I’ve seen so far.

3 thoughts on “The Bowery Boys Meet the Monsters”