I’ve heard it said that two heads are better than one. So, would it be fair to say that four heads is twice a good? Maybe, but what if we’re talking about heads of the shrunken variety? That’s right kiddies, today we’re going to enter the realm of voodoo where getting a visit from a headshrinker isn’t in reference to a psychiatrist that makes house calls. Get ready to battle a voodoo curse in 1959’s The Four Skulls of Jonathan Drake. 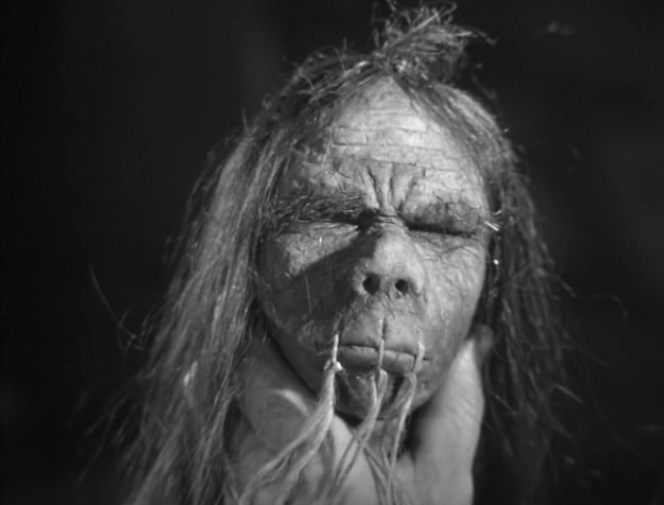 Professor Jonathan Drake (Eduard Franz) believes that his family is under a voodoo curse and as a result has studied the South American Jivaro Indian tribe for years. When he receives word that his brother, Kenneth, has recently found a shrunken head in his home, Jonathan rushes out to see him. Unfortunately, before Jonathan can arrive, Kenneth has been murdered by a mysterious man called Zutai (Paul Wexler) whose mouth is sewn closed. When Jonathan arrives, the funeral is already in progress. He insists on seeing the body, but when he opens the coffin, the body is minus one head.

It seems that Zutai snuck in unnoticed and grabbed the head. He brings it back to an archaeologist named Dr. Zurich (Henry Daniell) who then goes about the complicated process of creating a shrunken head. Meanwhile, Jonathan is convinced that his head is next in line to be shrunken. Jonathan explains to his daughter Alison (Valerie French) about how a curse fell on his family when his great grandfather ordered the slaughter of a tribe of Jivaro Indians in revenge for the death of his guide. He proves the story by taking Alison into the family crypt, where the skulls of his relatives sit in a cabinet, having been returned after the heads were shrunk.

It turns out that Jonathan’s fears are not so outlandish as Zutai has snuck into the house to attack him with a poisoned blade. This paralyses Jonathan, but Zutai is interrupted before he can snatch the head. Police Lt Jeff Rowan (Grant Richards), who has been on the case ever since the body of Kenneth Drake showed up without a head, takes a few shots at Zutai as he escapes, but it seems to have no effect. Now, Rowan starts to follow the clues, leading him toward Dr. Zurich who it turns out has a bizarre secret concerning his own head.

The Four Skulls of Jonathan Drake is a chilling little movie that is quite original in its premise. I don’t know that I’ve seen any other films where the murderer is out to decapitate his victims and shrink their heads. The sequence in which Dr. Zurich actually does some head shrinking is one of the film’s most squirm inducing moments. We’re not talking about gore, per-se, but the sequence is somewhat graphic. We actually see him sink the head in a boiling pot. Later we see him slice into the back of the head to remove the skull, then sew up the skin. From what I can tell the film is relatively accurate in its portrayal of the head shrinking process. Zutai also makes for a pretty intimidating villain who looks really sinister with his mouth sewn closed.

The film’s primary villain, Dr. Zurich, falls a bit short for me, though. I think this is primarily due to do the performance of Henry Daniell who seems absolutely bored out of his mind. Daniell had a long career in the movies, but in this role he seems to project an attitude that all of this is beneath him and it does detract from his character’s effectiveness as a villain. I will say, though, that the secret of the Dr. Zurich character, which I won’t reveal here, is wonderfully bizarre.

For the most part, The Four Skulls of Jonathan Drake is an effective little horror film. There are several moments that will give you the willies and a number of good horror gimmicks like shrunken heads and floating images of skulls. Midway through the film it does start to drift a little bit too much toward being a police procedural, but I can’t say that diminished my enjoyment of the film that much. Overall it’s a fun piece of horror that’s perfect for late night viewing.

One thought on “The Four Skulls of Jonathan Drake”