Though Bob Hope had a big career in the movies, I always think of his TV specials first. My family would always tune in for his NBC specials when I was a kid. I always remember the ones where he would introduce all the players on the All-American college football team. I still haven’t seen very many of his movies, though, with the exception of the Road films. We remedy that a bit with our film today which sees him hitting a destination that he and Bing didn’t take the road to in 1965’s I’ll Take Sweden.

Hope plays Bob Holcomb, a single father who often has to travel for work. In his absence, his daughter Jojo (Tuesday Weld) spends most her time at beach parties. As the film opens, Bob returns home to find a party going on in his own house and his daughter engaged to a guitar strumming slacker named Kenny (Frankie Avalon). With no job and a rundown trailer for a pad, Kenny is not Bob’s ideal son-in-law. With no hope a breaking up the couple, Bob accepts a transfer to Sweden, taking Jojo with him and even forging a breakup note from Kenny.

Upon arriving overseas, Jojo wastes no time hooking up with one of Bob’s employees, Erik (Jeremy Slate). Meanwhile, Bob starts to get cozy with his interior decorator, Dina (Karin Granstedt). It starts to look like Erik wants to marry Jojo, but in reality he wants to take her off for an extended vacation. Sort of a trial period before tying the knot, if you will. To the Swedes this is perfectly normal, but Bob is aghast. So, he quickly starts to make arrangements to bring Kenny across the pond to set Jojo straight.

This film is a strange mix. With Frankie Avalon belting out a few songs and various twenty-somethings parading around in bikinis it’s got a wee bit of a beach party movie vibe. Add to that Hope’s vaudeville style one-liners and you’ve got a unique concoction. I admit, I found a good portion of the film to be quite funny. Some may find Hope’s schtick to be a little bit on the corny side but I did find myself laughing. His chemistry with Tuesday Weld and Frankie Avalon is great and makes for some fun sequences. Hope struggles a bit, though, with being a romantic leading man. His relationship with Karin Granstedt’s character feels a bit awkward and forced.

Tuesday Weld also turns in a charming performance while Frankie Avalon is kind of a lovable goofball. The casting of Weld and Avalon was clearly an attempt to get some younger viewers to come to a Bob Hope movie. I can’t argue with either choice. Both are appealing and bring good energy to their parts. There are a few extended chapters of the film where Avalon’s character is absent, and he was mised. 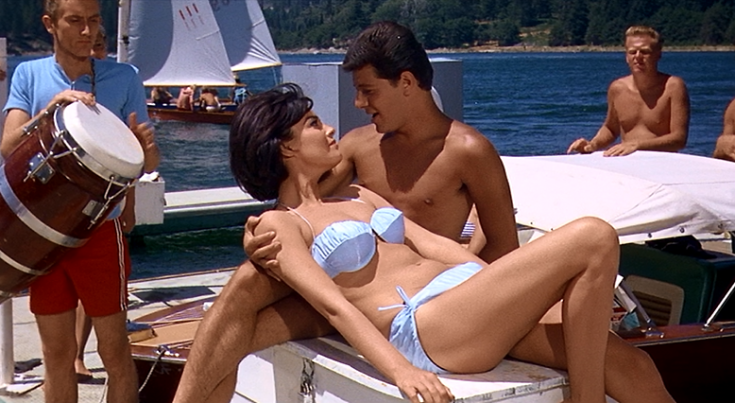 Frankie also gets to sing three songs as the film progresses. They’re fun if not terribly memorable. I was pretty glad, though, when the scene that has Frankie singing the title song came along as the film was really starting to drag a bit at that point. Luckily the final act of the film has a bit more energy as things start to turn into a door-slamming screwball comedy.

On a whole I found I’ll Take Sweden to be good for some laughs. I suppose many viewer’s level of enjoyment will depend on how they take to Hope’s brand of comedy. Even if his jokes aren’t your thing, there is still plenty enjoy in the performances of the film’s younger stars.

Note: I’ll Take Sweden was recently released on DVD and Blu Ray by Olive Films. Thanks to them for letting us check out the film.