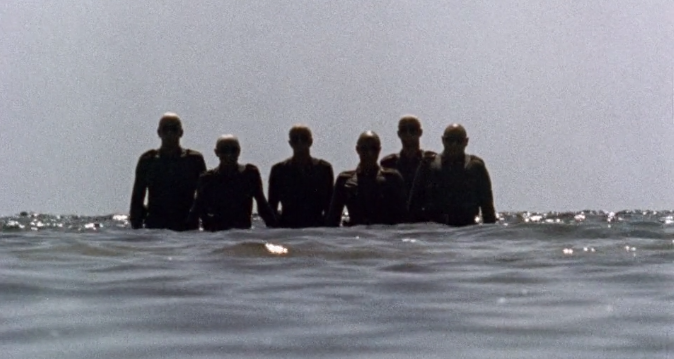 If you’re looking for really nasty villains for your movie, Nazis are as good a choice as anything. From Indiana Jones to the Blues Brothers, the best of them have gone up against Nazis. And if you’re Mel Brooks they are a constant source of comedy gold! Our movie today, however, asks the question of what do you get when you cross Nazis with zombies? Get ready for an attack by the undead, Third Reich style in 1977’s Shock Waves. 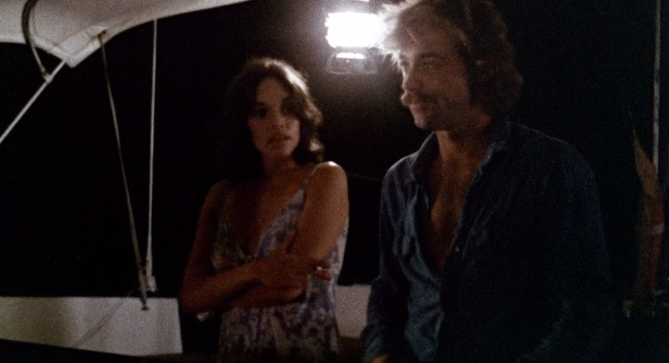 The film centers on a group of tourists out at sea on a small, somewhat ramshackle boat skippered by a crotchity old captain (John Carradine). There’s an annoying married couple, Norman and Beverly (Jack Davidson & DJ Sidney), another guy named Chuck (Fred Burch), and a lovely young lady named Rose (Brooke Adams). Oh, and we mustn’t forget the very non-Gilligan first mate Keith (Former Flipper child star Luke Halpin). After already having engine and navigation problems, Keith is surprised in the middle of the night when they are sideswiped by a much larger ship. The passengers have no choice but to hit the lifeboat and head for a nearby island.

On the island they find a sprawling, but seemingly abandoned, estate which was once a hotel. There is, however, someone living in the old hotel, a former Nazi SS commander (Peter Cushing). Meanwhile, various members of their party, including the captain and the cook, end up either missing or dead. You see, this reclusive Nazi was once the commander of a squad of zombie soldiers intended to be Der Fuhrer’s ultimate fighting force. When they got out of control, their ship was intentionally sunk. Now, it seems, they have returned to do the one thing they know…killing. The zombies start picking off the tourists one by one as the survivors try to find a way off the island.

A few years ago I reviewed another zombie Nazis film called Zombie Lake, which was released a few years after this. It’s a lot schlockier than Shock Waves, but this isn’t exactly highbrow, either. I did like the basic idea of the film. I mean come on…Nazi zombies rise out of the sea and attack tourists, I’m down for that! Having a crusty old guy who made a bunch of monsters and lives on a tropical island gave the film a little bit of an Island of Lost Souls vibe…though slight. Unfortunately, the Nazi zombies aren’t all that intimidating. I mean, it’s kind of cool seeing them lumber around in the waist-high surf, but I think most human beings could evade these speed demons without even breaking a sweat. 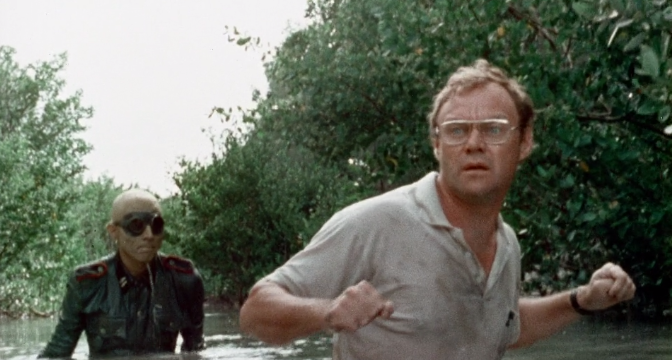 One of most baffling things about this film is the way that it features two icons of horror films…and then completely wastes them. Sure, both Carradine and Cushing were getting on in years at this point, but they could’ve been put to better use. I mean SPOILER Carradine is killed off before the rest of our heroes even make it to shore. Cushing is a fine choice to play a sort of mad scientist SS commander, but after he lets loose with the important zombie backstory he’s quickly 86’d as well. At least give us Cushing ordering the zombies around and taking great glee in seeing them dispatch with the tourists.

The film does have a few fun horror moments here and there. When Brooke Adams strips down to her yellow bikini and goes for a dip you just know she’s going to swim right up on a dead body like it were a Butterfinger floating in a country club pool. Sure it’s predictable but she’s such a good screamer that it’d be a crime to pass up such an opportunity. There were a few other interesting moments…death by sea urchin…but for the most part Shock Waves is pretty cut and dry. With better Carradine, better Cushing, and better zombies it would’ve fared much better.