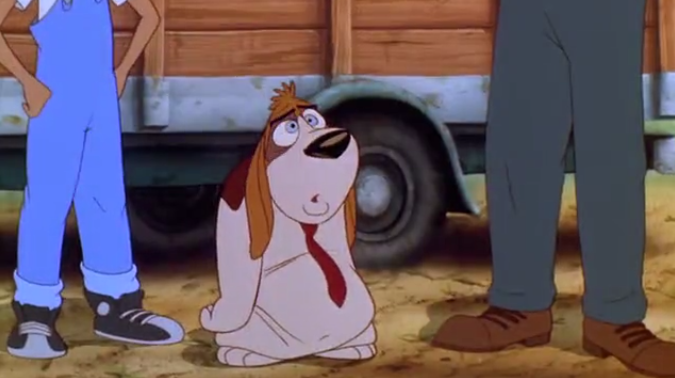 It seems like ever since the 90’s animated films have put an emphasis on getting big celebrities to voice the main characters. I think Aladdin was the film that really got this trend going back in 1992. Casting Robin Williams as the wisecracking Genie was an inspired choice. Today it doesn’t seem to matter if the casting makes sense, just so long as it’s a big name. I mean, I don’t know that too many people listening to Justin Timberlake’s music thought, “Hey, he should really voice one of those weird-haired troll things in an animated flick,” but we got that anyway. Well, a year before Aladdin came along, we had an animated film with a bit of celebrity voice casting at its center. Get ready for a canine version of Rodney Dangerfield in 1991’s Rover Dangerfield. 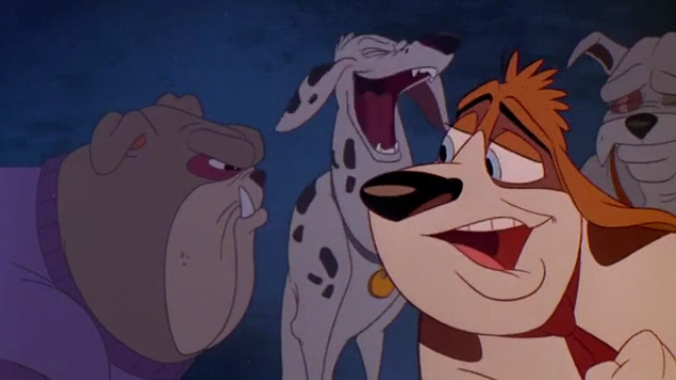 Rover is a dog owned by a showgirl named Connie living in Las Vegas. He sports a red necktie, which he often tugs at, and walks upright at times. He’s got a good life. But one day he spots a shady deal going down between Connie’s boyfriend, Rocky, and some other crooks. Rover accidentally spooks these goons and the deal goes south, which doesn’t please Rocky. Unfortunately for Rover, Connie is going out of town for a few days, leaving Rocky to watch the pooch. He ends up going to Hoover Dam and dumping Rover in the drink. 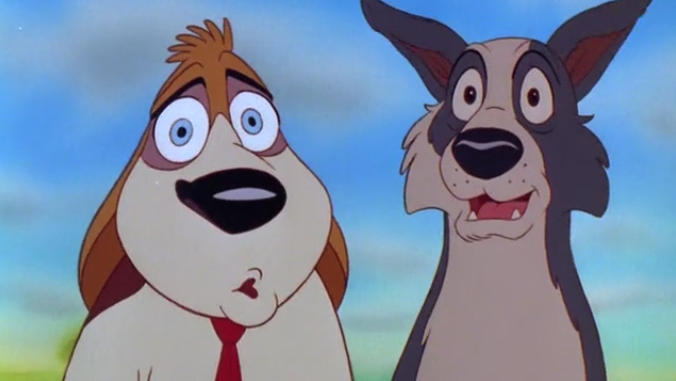 Long story short, Rover ends up found by a father and son and taken back to their farm. It takes some time for Rover to adjust to life in the country, especially the fact that he’s expected to work. He soon gets the knack of rounding up the sheep and doing other farm tasks. He also ends up getting a bit friendly with a lovely pooch named Daisy. Trouble comes, though, when Rover is suspected of killing a turkey that really fell victim to a pack of wolves. Our titular pooch ends up facing an Old Yeller type moment, but has the chance to be heroic when the wolves come back for more.

Rodney Dangerfield wasn’t just enlisted to do voice work for this film. His name is all over it. He produced it, came up with the story (along with Harold Ramis), wrote the screenplay, and penned the songs. Oh yeah, did I mention there were songs? One of these little ditties is the centerpiece of a Christmas sequence called “I Would Never do it on a Christmas Tree.” If I ever find a copy of this tune I’ll have to add it to my Christmas morning playlist. I’ll slot it right after “What do you get a Wookie for Christmas (When He Already Owns a Comb?).”

Dangerfield originally conceived this as an R rated animated film. The studio made him tone things down, though. There are still a few remnants of the adult themes, though. As you would expect from Dangerfield, there are a few gags that are not typical kid flick fare. I liked when Rover mentioned that they would “Paint the town yellow.” Hey, pee-pee is funny! I’ve known that since I was like two years old! Also a bit out-of-place in a kids film is the sequence early on that takes place in the showgirls’ dressing room…and some of them are clad in just their bras and panties. The story is pretty standard fare: street smart dog is plopped into a down home country environment. It makes for a few decent scenarios, but I found myself wishing that the film had kept Rover in Vegas. I wanted to see him hustling his way through life in Sin City. Have him pull a few cons or deal with some gangsters. Instead we take him from a very rich and vibrant environment and put him in a pretty flat one. I’ve got no problem with the country life, but there’s not a whole heck of a lot happening on this farm. That is, except for the wolf attack, which brings us another moment that is not characteristic of most kids films. Instead of just hinting at the death of the turkey, we actually get to see Rover standing over the body of the deceased. Tongue hanging out of its beak and everything. 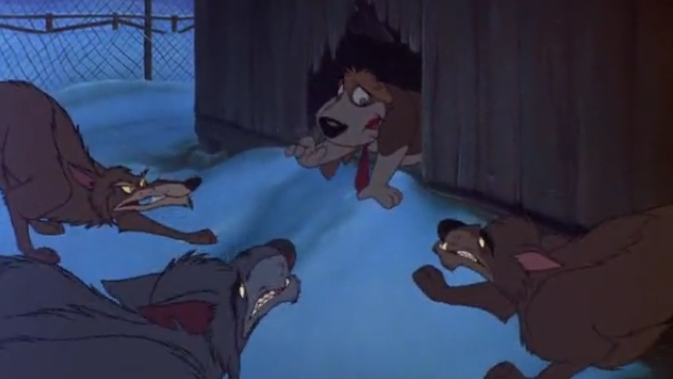 The animation is passable. Far from the heights we were seeing out of Disney at this time in their history. The style is part Don Bluth, even down to the somewhat muted color scheme that plagues many of his films, and part Ralph Bakshi, especially when it comes to some of the human characters populating the Vegas strip. Ultimately, those are two animation styles that I don’t think I would’ve chosen to marry. While both of those filmmakers have their qualities, their animation often frustrates me. From an artistic standpoint, Rover Dangerfield really does nothing to advance the art of animation. That doesn’t make it a bad effort, but considering how much innovation was going on in the animation of the early 90’s, the fact that this film sees the art form just marking time is a disappointment. 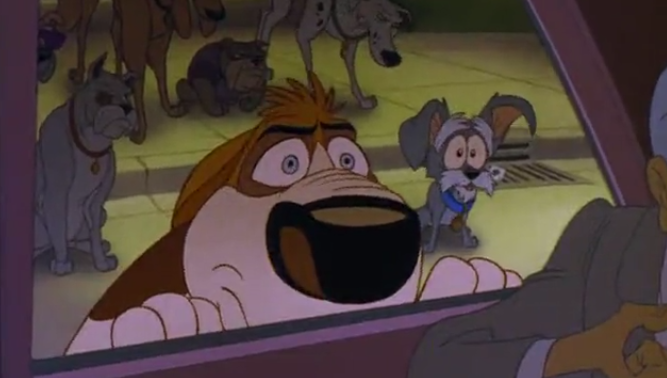 Though it’s a kids film, Rover Dangerfield’s best moments will go over the heads of the younger viewers. For adults, there is a certain amount of pleasure to be had simply from seeing Rodney voicing a cartoon dog, but even the novelty of that wears off a bit as the film progresses. Sorry, but when it comes to this film, Rodney still ain’t gettin’ no respect.