Living here in Colorado, the Air Force is a big deal for us. I drive past a pretty large Air Force base on my way to work every day, and just about 60 miles to the south is the Air Force Acaemy in Colorado Springs. Back when today’s film was released, the Air Force still a relatively new branch of our military, so it’s understandable that there would be quasi-propaganda pieces such as this one…1955’s Strategic Air Command. 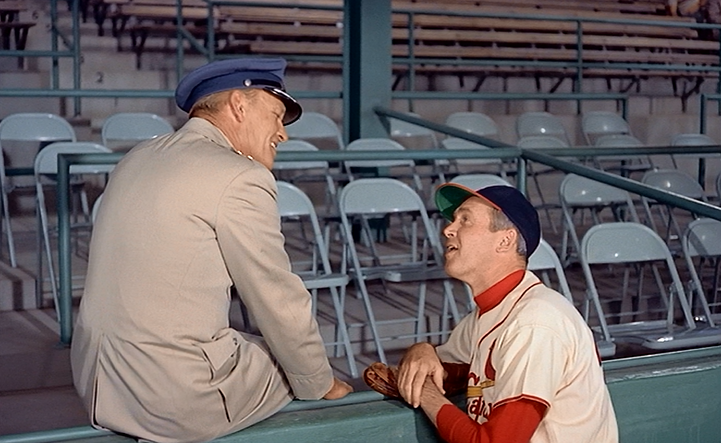 The film focuses on Robert “Dutch” Holland (James Stewart) third baseman for the the St. Louis Cardinals and a former bomber pilot during World War II. One day, in the midst of spring training in Florida, Dutch is visited by a former military buddy who is now a General. He has come to deliver the news that Dutch has been recalled into active duty in the Strategic Air Command for 21 months. Dutch is willing to do his duty, but is none too happy, of course. After all, it means he and his wife, Sally (June Allyson), have to leave their new house, not to mention give up a $70,000 baseball contract.

Dutch reports for duty and he and Sally take up residence in less than glamorous accommodations on the base. The work is hard on Dutch, who often has to fly to places like Alaska or Greenland and back in the course of a day. One such trip even ends in a crash landing, which the crew survives thanks to Dutch’s experience. The crash, however, causes a shoulder injury which threatens to hamper both Dutch’s military career and his future in baseball. 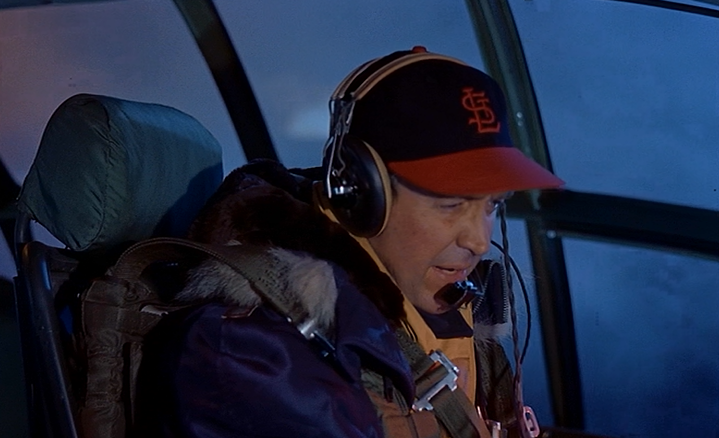 Strategic Air Command struck me as a very odd piece of propaganda. If the goal was to boost the military and encourage men to sign up, it goes about it in an odd way. I mean, it opens with Dutch’s old friend, the general, being a real jerk to him. It’s not like he couldn’t find someone else for the job, but sure…let’s call in the guy who stands to lose a high-paying sports deal and just bought a new house. Speaking of the baseball side of things in this film, that’s perhaps the most unbelievable part of it. I’m honestly supposed to believe that 47 year old Jimmy Stewart is the starting third baseman for the Cardinals!? As a Cub fan, I don’t think highly of the Cardinals, but let’s get real here! On a side note, there are some that have suggested that this aspect of the story may have been inspired by the Boston Red Sox Ted Williams, who had served in World War II and was called back into active duty at the height of his baseball career.

This film really doesn’t have too much of a story. It seems to primarily be a look at the challenges, both at work and at home, of the families who sacrifice to serve in the military. That’s all well and good, but it comes across as a bit too nicey nicey. Even when we’re supposed to believe that Dutch and Sally are going through challenging times, everything just seems a bit too perfect. June Allyson might as well be auditioning for the Mom role on Leave it to Beaver here. 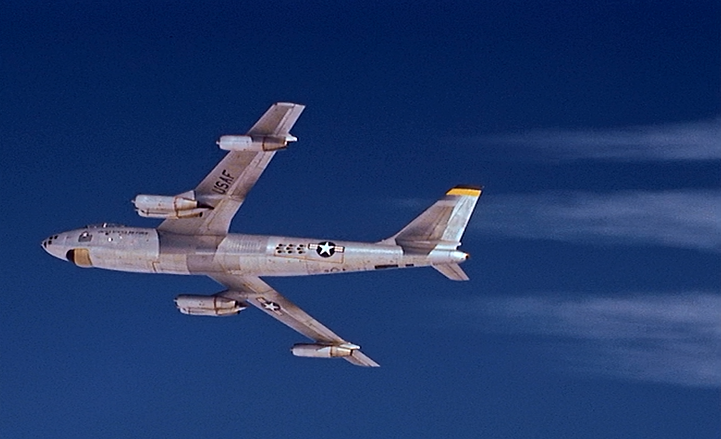 What I did enjoy about the film was the aerial sequences. There are several of them, and you could certainly make a case for them being a bit too drawn out, but they are beautifully filmed. I’m not even someone who is particularly interested in aircraft, but the footage here is quite stunning. Clearly the Air Force gave the filmmakers considerable access to create some very impressive sequences.

Jimmy Stewart himself had served as a pilot during World War II, and was a part of the Strategic Air Command at the time this film was made. His passion and appreciation for those who serve is obvious. Stewart’s heart is clearly in the right place with this film. However, though the film is filled with impressive aerial sequences, it struggles quite a bit on the dramatic level.

NOTE: Strategic Air Command was recently released on DVD and BluRay by Olive Films. Thanks to them for letting us take a look at the film.