After Jamie Lee Curtis made a name for herself by appearing in Halloween, she quickly became labeled a “scream queen.” She ended up appearing in several more horror flicks, most famously the 1980 film Prom Night. It took seven years for an in-name-only, and Jamie-Lee-less, sequel to arrive. Here comes 1987’s Hello Mary Lou: Prom Night II. We begin in 1957 at the prom of Hamilton High. Mary Lou Mahoney (Lisa Schrage) is attending with her loyal boyfriend Billy, who even gives her a special ring as a gift. However, Mary Lou is a bit of a…shall we say “free-spirit.” This means that when the time is right, she goes off to a hidden part of the school to bump uglies with another guy, Buddy Cooper. When Billy catches them, she doesn’t even care. So, to get revenge, Billy plots to drop a stink bomb on Mary Lou as she is named prom queen. Sadly, his bad aim causes her dress to light on fire, and she burns to a crisp. 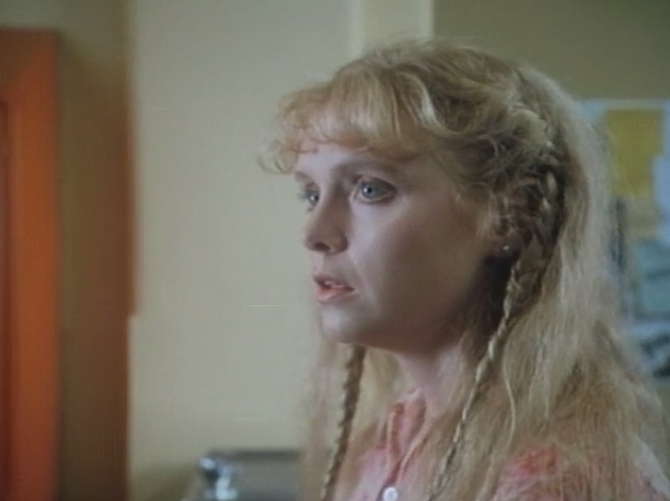 Fast forward to present day where a girl named Vicki (Wendy Lyon) is getting ready to attend prom herself. Her date is Craig (Louis Ferreira), who also happens to be the son of the principal, who happens to be the adult Billy (now played by Michael Ironside). Things all seem fine, but trouble begins when Vicki finds a dress, tiara, and sash in a trunk in the school auditorium. Soon, strange things start happening, starting with the death of one of Vicki’s best friends. Of course, everyone thinks it’s a suicide. Soon Vicki starts having hallucinations of demonic things, both at school and at home in her room. The local Catholic priest (Richard Monette), who is Buddy all grown up, also starts to have a feeling that something evil is afoot. Gradually, it becomes clear that Vicki is being possessed by the spirit of Mary Lou, who plans on finally getting to reign as prom queen, and killing as many people as she can in the process. Hello Mary Lou: Prom Night II was a Canadian production which originally had no connection to the original Prom Night. It was supposed to be called The Haunting of Hamilton High, but the distributor decided to try and capitalize on another film’s success, seven years after the fact. The film was clearly made with an eye for giving tribute to past horror flicks. Some characters even have names taken from other horror filmmakers. The science teacher is named Mr. Craven, for example, and Vicki’s last name is Carpenter. Film fans will also surely spot elements of films like Carrie, The Exorcist, and especially A Nightmare on Elm Street 2. Yet, despite wearing its influences on its sleeve, Prom Night II somehow takes all these things and creates something that is very clever, creative,and one heck of a wild ride! This is an anything goes sort of movie. You know how Gremlins 2 goes completely bonkers? Well, that’s what we have going on here. Freaky moments include such things as zombie lunch ladies, a volleyball net that turns into spider webs, a hobby horse that comes to life, and a bed that appears to molest the person sleeping in it. This is all before the whole possession thing even takes full effect and the bodies start to pile up. From there we have a chalkboard that pulls Vicki into it like a black whirlpool.  This sequence is incredibly creative, with even the words written on the board swirling around in the vortex.  Plus, it’s all practical effects, peeps.  If you’re still not sold on how bizarre this film is, there’s a scene where the now possessed Vicki stalks her victim through the girls locker room while completely naked.  Let’s see Jason or Freddy do that.  Actually, let’s not.  So, while the film is clearly trying to honor other fright fests of the past, it also seems to be saying “you ain’t seen nuthin’ yet.” I don’t know whether to say the kills are innovative or just plain crazy. Whatever it is, I got very caught up in wondering what on earth this film was going to do next. Apart from Michael Ironside, there aren’t really any big names in this cast, but they all do a very nice job. Wendy Lyon is very good when she has to be the shy and sweet Vicki, and also lovably sinister when possessed by Mary Lou. Also fun, in a more comedic role, is Brock Simpson (who actually appeared in the original Prom Night), as resident computer geek Josh. I can’t help but wonder if this character may have been somewhat of an inspiration for the Jamie Kennedy character in the Scream movies. He also has a great scene which I guess could serve as a warning against spending too much time in front of your computer screen. My favorite member of the cast, though, was probably Terri Hawkes as Kelly, the girl won’t let anyone get in her way of being named prom queen. The character feels like she could’ve been plucked right out of more famous 80’s teen flicks like Sixteen Candles or Can’t Buy Me Love. On a whole, the young members of the cast come across as very genuine and believable 80’s teens, even with all the bat guano stuff going on around them.

When I watched the original Prom Night a few years ago, I gotta admit that I wasn’t that impressed. It has it’s moments, and Jamie Lee Curtis is great, but there were also a lot of missed opportunities from my point of view. On the other hand, Hello Mary Lou: Prom Night II doesn’t miss any opportunities, It was a roller coaster ride that I, quite honestly, didn’t want end.