Sports was never my thing. I played a little bit of soccer as a kid and a lot of baseball in the cul-de-sac at the end of the street, but I can’t say I was ever any good. Hockey was certainly never a game that was in my wheelhouse. Sure we played it in gym class from time to time, but on a basketball court, without skates and using a light plastic puck. I’m just not cut out for the high potential for injury inherent in the game of hockey. Our film today, though, is about a bunch of young hockey players who seem to enjoy getting bruised up as much as they love the game itself. Rob Lowe and Patrick Swayze hit the ice in 1986’s Youngblood.

The film tells the story of Dean Youngblood (Lowe), a 17-year-old from a New York farm who heads north to Canada, against his father’s wishes, to try out for a bush-league hockey team, the Hamilton Mustangs. Dean is smaller than many of the other players, but he’s got speed which leads to Coach Chadwick (Ed Lauter) signing him up. Of course, as the newbie, Dean ends up enduring a lot of hazing from the other members of the team, including Heaver (Keanu Reeves) and Derek Sutton (Swayze). Lucky for Dean, he catches the attention of local cutie Jessie (Cynthia Gibb), who also happens to be Coach Chadwick’s daughter. Eventually, he also starts to develop a true friendship with Derek, who he sees as a mentor. 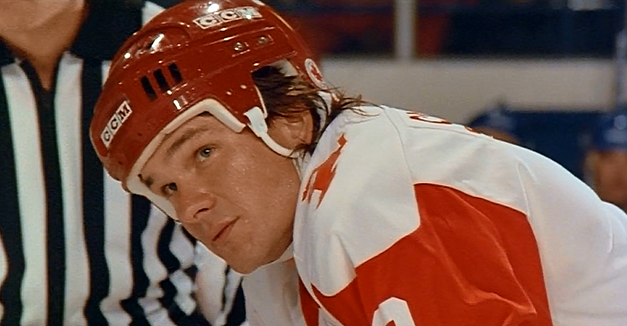 It doesn’t take long for Youngblood to become a very popular player. Now, the hockey these guys play is pretty brutal and can be taken a bit too far at times. One rival player in particular, Racki (George Finn), especially has it out for Dean and Derek. In fact, he blindsides Derek causing a serious injury and landing him in the hospital. Now Dean struggles with giving up or taking the fight to the ice.

I recently listened to a podcast that mentioned this film, calling it the worst movie of 1986. Um…no, it’s not amazing, but it’s far from the bottom of the barrel. This podcast, though, did accurately point out that this movie is not about hockey, it’s about fighting. There’s no montage sequences here showing Youngblood becoming a more skilled hockey player, he seems to already have the skill. What we get is everybody trying to get him to punch the other players, despite the fact that he’s a toothpick compared to everyone else on the ice.  I get that the violence is a part of the game and all, but the story would’ve been more convincing had it been about the little guy besting the bullies with skill rather than sinking to their level. I mean let’s be honest, Rob Lowe would be a bloody pulp on the ice after a game or two. 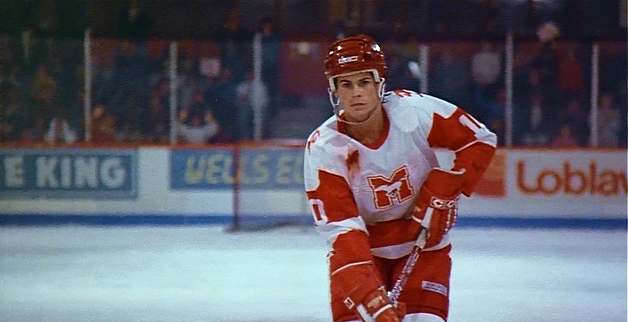 That aside, there were certainly things about Youngblood that I enjoyed. The rough and tumble world of junior league hockey is an interesting subject manner. It’s grimey, not at all glamorous, and a bit bizarre. For example, one of the team’s assistant coaches does needle point as a hobby, which also means he gets to sew up the players’ injuries when stitches are needed. One of the strangest elements of the story is that all the players live in a boarding house run by a middle-aged woman who sees it as her mission to bed down with each and every player that stays under her roof. She even collects hockey cards of all her former “boys.” I don’t know how much of all this is accurate, but there is some nice world building here. 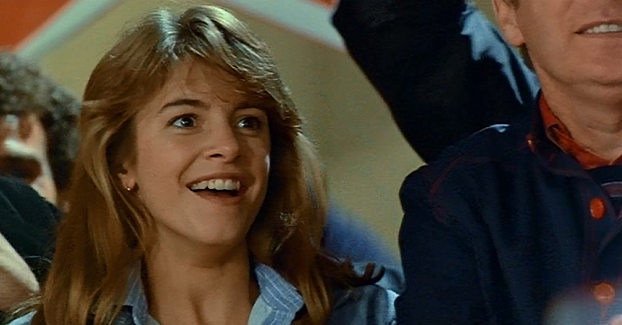 When it comes to the performances, the film is a bit uneven. As I said earlier, Rob Lowe is not all that convincing as a hockey player. He’s a bit too pretty.  I mean, he doesn’t look like he’s ever cut himself shaving, let alone been slashed in the face with a hockey stick. Swayze does a much better job selling his part. He’s the kind of guy you want to root for and when his character meets with tragedy it ends up having some emotional weight. Cynthia Gibb is also a lot of fun here…but she’s pretty much always adorable, so that goes without saying.

Ultimately, I enjoyed Youngblood on a certain level, though I still wish it had taken a bit different approach. If the story had a bit more nuance, and didn’t always resort to throwing punches, I think we could’ve had a more well-rounded film. As it is, it’s an intriguing look at a gritty corner of the hockey world. I still don’t understand why any player would subject themselves to all this, but I was intrigued none-the-less.