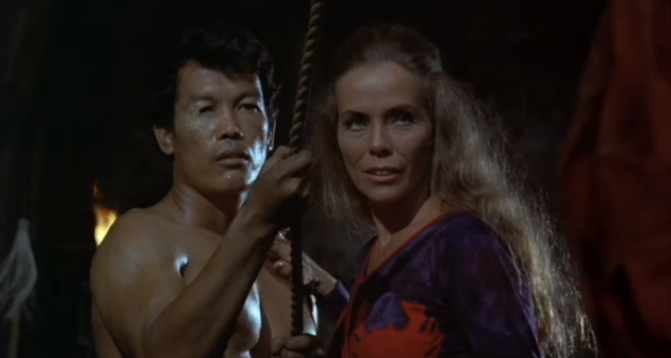 Everybody knows by now that Tom Selleck is the man who was almost Indiana Jones. What stopped him? Well, he couldn’t manage to do that film and still keep his commitment to his hit TV show, Magnum P.I. Though he’s had a few movie hits, he’s always been thought of as more of a TV star ever since. He did have a few big screen roles before Magnum, though, including this outing battling witches in 1972’s Daughters of Satan.

Selleck plays James Robertson, a man living in Manilla who buys art for museums. He is called to a small shop to look at some rare tapestries, but while there spots an intriguing painting. It depicts three witches being burned at the stake, along with a big black dog. One of the witches bears an uncanny resemblance to Robertson’s wife, Chris (Barra Grant). Intrigued, he buys the painting. However, when he shows it to his wife, she is repulsed. Well, at first she is, but soon she starts to warm up to the painting.

Soon, some strange things start to happen. At one point, the Robertsons encounter a large black dog, just like the one in the painting. Strangely, they also notice that the dog no longer appears in the painting. Later, they also hire a housekeeper (Paraluman) who resembles one of the other witches in the painting. At one point, this housekeeper gives Chris a small package, the contents of which cause a strange gas to fill the room when mixed with water…almost suffocating her husband. It seems that Chris, the housekeeper, and another woman (Tani Guthrie) are the witches from the painting reincarnated, and they are out to kill James, who is the descendant of a witch hunter from long ago. 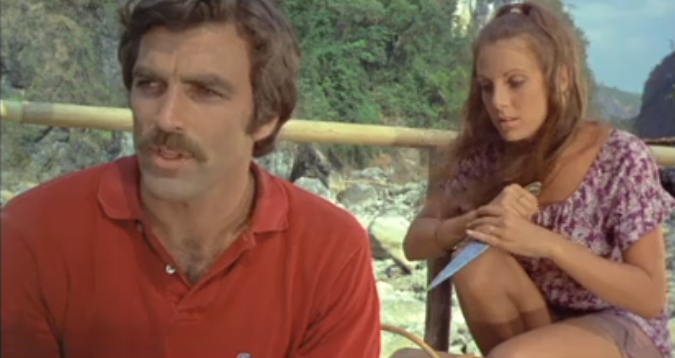 Daughters of Satan very much has the vibe of a low-grade horror flick, though strangely it was released by a pretty big studio…United Artists. It’s got a fair amount of schlock, but not quite as much as the story seems to warrant. In fact, I think the big problem with this film is that there really isn’t that much that happens. It starts weird enough, with a witch hanging naked over a bunch of spikes as other witches taunt her. After that, though, the film becomes pretty stale, with very few moments that would be considered horrific. There’s an awful lot of the film that seems to be devoted to just staring at the weird painting, and that doesn’t make for a terribly engaging film.

I will say, though, that Tom Selleck turns in a solid performance. Even with the rest of the cast doing a serviceable job, Selleck, truthfully, acts circles around everyone else. He’s charming and charismatic and makes it quite clear why he’s the one here that went on to a big career. There’s a downside to his performance, though. Simply put, his character is unflappable…and I’d say unflappable to a fault. I mean, it’s supposed to be a horror movie, but Selleck’s character seems completely unfazed by everything that is going on. That moustache of his doesn’t get ruffled for anything. If he’s the one who is supposed to be living through these events, but he’s not freaked out by anything…well, where does that leave us as an audience?

The film does make a somewhat gallant effort when it comes to creating some weird atmosphere. The little shop where Robertson first finds the painting is appropriately weird. Also weird is Tani Guthrie as one of the other witches. In the middle of one scene with Selleck she suddenly becomes naked, but still Selleck is unfazed. He just sit there next to her chatting like they were havin’ coffee at Denny’s. Sadly, it’s the opening scene of the movie that is the most effective at creating a horror atmosphere, but that feel is never replicated through the rest of the film’s running time.

Though the charismatic screen presence of Tom Selleck was enough to keep my slightlty interested in this film, it’s a pretty weak attempt at a horror movie. It doesn’t help either that the ending of the film is a real head-scratcher that had me mystified as to what supposedly happened. I guess if you’re into seeing major actors slumming it in their early movie roles, though, you could do a lot worse than Daughters of Satan.

One thought on “Daughters of Satan”