Product placement in movies can be a big deal, and it often draws complaints from viewers. When Back to the Future Part II was released in 1989, there was a lot whining about all the products that were prominently featured, although I always thought it was completely appropriate to see future versions of companies like Pepsi, Pizza Hut and Texaco on screen. I’m still waiting, though, to be able to make a pizza by just saying, “hydrate level four, please.” Having one’s products featured in such a blockbuster was a coveted thing, but it’s not every day when you run across a film that begins with a lengthy statement advising the audience that a certain product does not endorse its appearance in the film you are about to watch. Such was the case with the 1985 Australian import, The Coca-Cola Kid. 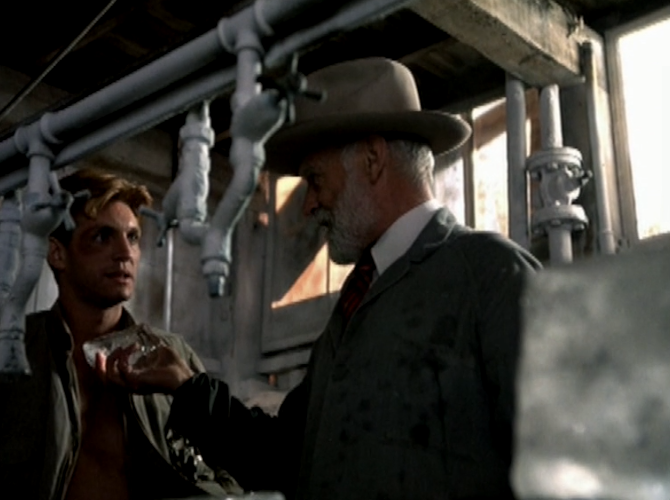 The titular “kid” is a hotshot Coca-Cola marketing wiz named Becker (Eric Roberts), send from Atlanta to spice things up for Coke in Australia. In the course of doing his research, he finds a region of the Land Down Under, known as Anderson Valley, where Coke products are nonexistent. That’s because the folks in that region are hooked on the drinks of local eccentric T. George McDowell (Bill Kerr). It also doesn’t hurt that whenever the big soft drink reps show up in town, he scares them off with his shotgun.

Becker is determined to get Coke into this remote corner of Australia, even if that means striking a deal with the odd McDowell, who sees a future that involves Coke marketing his drinks across the globe. Becker also has to deal with a unique relationship with his Aussie secretary, Terri (Greta Scacchi), who has ties to Anderson Valley, as well as a variety of other quirky characters.

The Coca-Cola Kid is a film that has several interesting pieces which don’t exactly fit together perfectly but do manage to create a pretty enjoyable film. If I’m going to be completely honest, I’d say that Eric Roberts is somewhat miscast in this part. After his creepy turn as Paul Snider in Star 80, it’s hard to imagine him playing any character that would be described as “kid.” Plus, despite having spent some of his youth in Atlanta, his attempt at a southern-fried accent is as labored as you would expect it to be. Yet, there is something very charming about Roberts’ performance. You totally buy that he sees Coke as the great hope for the world and that in his world making sure that the citizens of Anderson Valley can have a Coke and a Smile is his purpose in life. Likewise, Greta Scacchi’s performance is lovably quirky. Tonally, she seems to be in a different hemisphere than Roberts, and yet when everything finally clicks between their two characters, we totally buy it.

Though the two leads are appealing in their own ways, the standout performance for me was Bill Kerr as McDowell, king of the Anderson Valley soft drink market. He’s a shrewd, gun-toting backwoods businessman who’s both an oddball and the smartest character in the film. His business methods are a bit off-kilter, but they’ve worked for him…that’s all that matters. We do get some brief glimpses of some of the other unique citizens of Anderson Valley, but the film does fall a bit short in the world-building department. I needed more moments where this slick young marketing guy from Atlanta deals with the culture shock of going to this remote Australian town.

The film also misses the mark with a few strange subplots that are more distracting than entertaining. A few sequences involve Becker trying to find the “Australian sound” for a Coke commercial. He even hires a didgeridoo player he meets on the street to contribute. The song the come up with is catchy but doesn’t do anything to move the story forward. There’s also a really cringe-worthy sequence in which Terri and some cohorts attempt to cause trouble for Becker by having some homosexual men hit on him so they can snap incriminating photos. It’s a sequence that almost completely flushes the likability of Scacchi’s character down the toilet. It speaks well of her ability as an actress that she brings the audience back into her camp by the time we reach the film’s climax.

I remember when I was a kid there was a Coke commercial that used a song that said, “I’d like to teach the world to sing in perfect harmony.” I can’t say that The Coca-Cola Kid has anything close to harmony going on. It has several parts that work well on their own, even if they don’t quite come together perfectly. This is a film that has a lot going for it, but it does end up going flat a few times.