It’s time for a trip into the far off future. We’ll visit a post-apocalyptic world where a few beleaguered survivors eek out an existence in the ruins of New York City. Yes, film fans, this is what awaits us in the year…2012!! Okay, so when the date appeared on the screen I couldn’t help but chuckle. That’s pretty much the last laugh this 1975 film offers, though, in this grim action story from director Robert Clouse, the man behind Enter the Dragon. Prepare to meet The Ultimate Warrior. 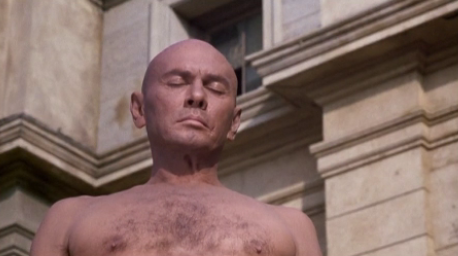 The film concerns a man known as The Baron (Max von Sydow) who leads a group of peaceful survivors who live in the ashes of New York in their own small compound. Trips outside the compound to do things like hunt for pigeons are often interrupted by an evil neighboring group led by a man known as Carrot (William Smith)…yes, he’s a ginger. With this ever-present threat, Baron recruits a warrior known as Carson (Yul Brynner), who has recently arrived in town, to serve as protector. Carson takes the job and Baron soon confides in him that he needs his help to lead the people to a safer place. Also, Baron wants to protect his adult daughter Melinda (Joanna Miles), who is pregnant, and her lover Cal (Richard Kelton), whose ingenuity has led to the development of new hybrid vegetables to feed the people. Baron wants to make sure Cal’s precious supply of seeds can be allowed to thrive in a new locale.

Carrot has his eye on the veggies too, though. He sends a bunch of his men out to raid the produce section, so to speak. The fight that ensues ends up leading to Cal’s death and unrest among the people. Knowing that most of the people will be unwilling to leave the compound, Baron sends Carson off to find the promised land with Melinda and the seeds in tow. Of course, Carrot and his men pursue through the subway tunnels, forcing Carson to take them out one by one…and deliver a baby in the process. 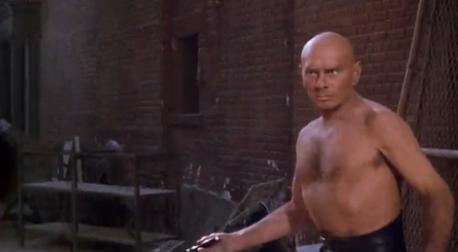 The Ultimate Warrior is an interesting precursor to some of the action films of the 80’s.
As I watched, I could easily picture a Stallone, or Willis, or Schwarzenegger taking on the role that Yul Brynner plays. He’s pretty much a one-man army here. Armed-only with a small knife, he manages to make mush of the bad guys while barely breaking a sweat. He’s a character who has pretty much abandoned emotion. He does whatever he needs to do to survive, and much of the time that gets pretty ugly. I gotta hand it to Brynner, he comes across as a very intimidating figure and shows off some pretty impressive fighting moves. 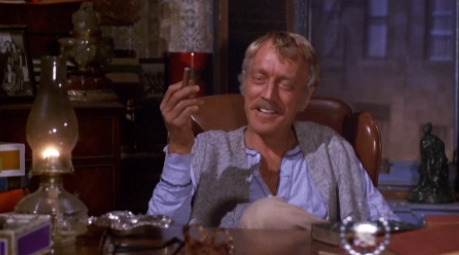 At the same time, Max von Sydow also shines in a role that is not so cut-and-dry as Brynner’s. I kept going back and forth on Baron. At times he seems like someone’s whose primary concern is the protection of his people, and yet at other times he comes across as very selfish. It’s a delicate balancing act which Sydow is more than up to. I also enjoyed William Smith as the villainous Carrot. I admit, though, it’s bit of a stretch to accept that he allowed himself to be called that. I would think that he’d have killed people for less. Wait, maybe he once killed somebody with a carrot and that’s where the nickname came from. Stabbed ‘em through the throat with one like a shiv. Now there’s some backstory I need to see.

Director Clouse does a pretty decent job of creating the post apocalyptic atmosphere of this story. Though the sets are very clearly a Hollywood backlot, they are used pretty effectively. Things may have been enhance somewhat by the eerie establishing shots that open the film of a less than picturesque New York City. The sad thing is I don’t think these shots were dressed down much, if at all. I’m thinking the second unit went out and found some of the ugliest images they could, while including New York landmarks in the background. This includes the twin towers of the World Trade Center…still standing in 2012 in this film.

At times The Ultimate Warrior seems to be flirting with trying to say something of substance about human nature and how we respond when thrust into extreme situations. If that resonates with you then great, but for me this one succeeds more for its action and Brynner’s stoic approach to the mayhem he unleashes.