Sometimes I’m really surprised by the career path of some film directors. They don’t all just show up in Hollywood one day and start directing films. Joel Schumacher, for example, started as a costume designer…and now we have bat-nipples. Making a bit more sense is the career of Hal Needham, who first gained success as a stuntman and went on to direct a string of stunt-centric films. Successful, stunt-centric films, I might add. His directing debut was Smokey and the Bandit…second only to Star Wars at the box office in 1977. A few of his films, though, have not endured over the years, such as his 1983 team-up with Burt Reynolds, Stroker Ace.

Stroker Ace (Reynold) is a popular NASCAR driver with many championships under his belt. He is a bit full of himself, though, and has problems hanging on to a sponsor. With few options, Stroker reluctantly signs on with the owner of a string of fried chicken restaurants, Clyde Torkel (Ned Beatty). The contract allows Torkel to pretty much call all the shots, even going so far as to make Stroker do commercials in a chicken suit.

Pretty much the only thing keeping Stroker from going against his contract is that he has the hots for Torkel’s director of marketing, Pembrook Feeny (Loni Anderson). When she decides to quit after some unwanted advances from her boss, she joins Stroker’s pit crew. Then, along with his chief mechanic, Lugs (Jim Nabors), they hatch a plan get Torkel to dump Stroker while still managing to win the big race. 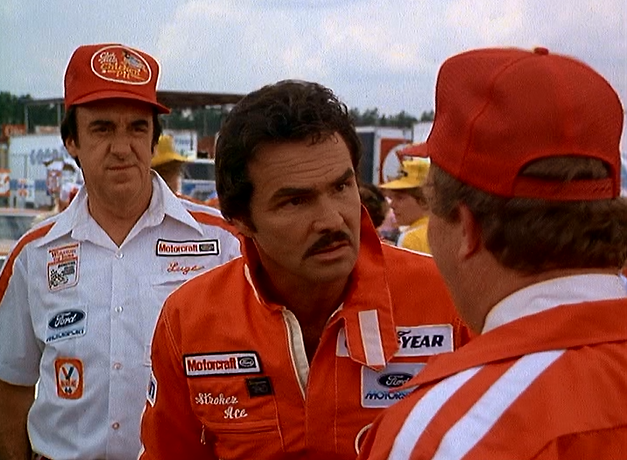 Considering Needham’s background as a stuntman and his other films like Smokey and the Bandit and the Cannonball Run films, I was very surprised at how little stunt action there is in Stroker Ace. Most of the action sequences are the race scenes, which have quite a bit of actual NASCAR footage incorporated. So, we do see some actual crashes from actual races. That’s cool and all but it’s not terribly cinematic. You never know when or where an actual crash might happen…so the cameras are not necessarily situated in a way to capture the action for maximum impact. The film would’ve really benefited from a few well staged stunt sequences.

Burt Reynolds is…well…Burt. Though he has a few fun moments, I think he maybe gets a bit too caught up in the smirking and winking routine in this one. A pleasant surprise, though, is Loni Anderson. She’s got some funny moments and is more than a match for Burt. Remember, the off-screen relationship between the two became a mainstay of the tabloids at this point in the 80’s. I will say, though, that this film has a very uncomfortable sequence between Reynolds and Anderson where she ends up unconscious after having had too much to drink. Stroker takes her to her room, undresses her a bit, and has a debate with himself over whether or not he should take advantage of the situation. Not exactly the way to endear Burt’s character to the audience…especially in a PG flick. 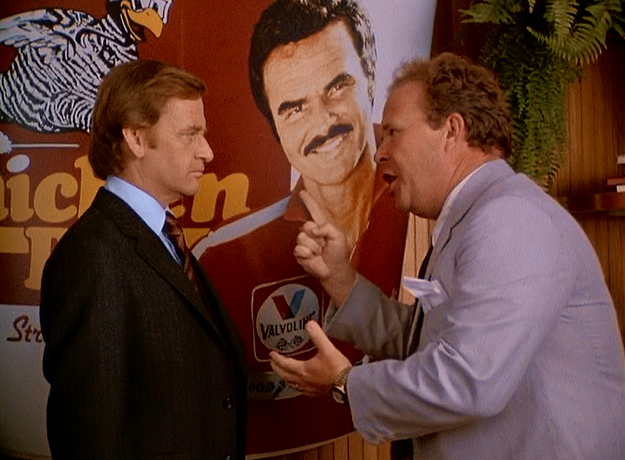 It is a bit funny that one of the plot points of this film is NASCAR fans becoming insulted by the commercialism that Stroker has to take part in.  NASCAR fans insulted by commercialism?!?  Seriously?  There are so many product logos on the cars and uniforms of these drivers that you can’t even tell what the original color is!  There is no sport more caught up in product placement than NASCAR, folks!  Still, NASCAR fans will probably have fun with this flick. Beyond the racing action there are cameos by a number of actual racers from the 80’s. Speaking of cameos, there is a very brief appearance by Cassandra Petersen, aka Elvira, Mistress of the Dark, as a race groupie who tries to hit on Jim Nabors!?!

Watching Stroker Ace it’s clear that the cast were having a great time making it. As a member of the audience, though, it feels like we’re not completely in on the joke. Several other Needham/Reynolds collaborations are guilty of the same thing (Smokey and the Bandit II, Cannonball Run II). At least Dom DeLuise doesn’t show up this time.