As I see it there are three primary components of most Hammer Studios horror films: creepy atmosphere, a scary monster, and a few gorgeous women. Add Christopher Lee, Peter Cushing or both to the mix and you’ve got a movie! As Hammer’s movies started to enter the 70’s they, like the rest of the movie industry, had a bit more flexibility in the area of sex and nudity. You better believe Hammer exploited this new freedom. Prime examples of this are a loose trilogy of films featuring some sexy female vampires, known to Hammer fans as the Karnstein Trilogy. Today we look at the final entry, 1971’s Twins of Evil. 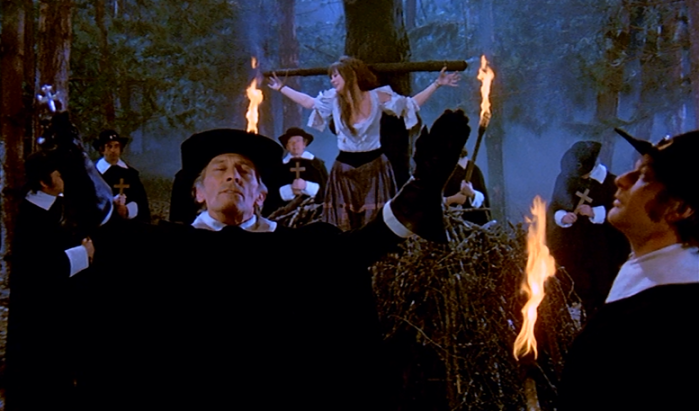 We are first introduced to Gustav Weil (Cushing), a crotchety old puritan who enjoys spending his evenings accusing sexy young ladies of being witches and burning them at the stake. One day, after a successful evening of witch burning, Gustav meets his two recently orphaned nieces Freida (Madeleine Collinson) and her twin sister Mary (Mary Collinson) who have come to stay with him and his wife. Mary starts to settle in to her new home but Freida immediately starts to resent the controlling ways of her uncle. She also begins to become intrigued by Count Karnstein (Damien Thomas) who lives in the castle up on the hill.

It just so happens that in the castle the Count has all sorts of evil going on. One night he carries out the sacrifice of a young woman which ends up conjuring up the spirit of the Countess Mircalla Karnstein, who promptly turns the count into a vampire. Before long, the count invites Freida up to the castle and transforms her into a vampire as well.

Meanwhile, the girls’ handsome teacher, Anton Hoffer (David Warbeck), has taken a romantic in interest in Freida as well. Freida even tries to seduce him but her lack of reflection clues him in to her undead-ness. Now he must try to convince Gustav of how to properly dispatch with vampires, while Freida initiates a plan to switch places with her twin and escape with the count. 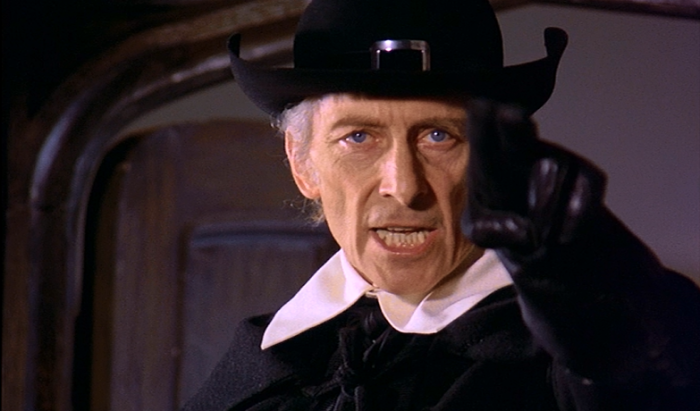 The biggest strength of Twins of Evil is really the performances. First you’ve got Peter Cushing, and let’s face it, it’s hard to go wrong there. Having burned an innocent girl at the stake within the first five minutes of the film, he establishes himself as a villain of the piece early on and he’s not even one of the vampires. It becomes pretty clear that the girls Gustav chooses to sacrifice are ones that he has lusted after, which adds another creepy aspect to the character. Burning them is a way of dealing with his own sins more than anything. In the subtlest of ways, Cushing adds little hints that lustful feelings regarding his own nieces have crept into his mind as well. Yet as the film progresses, and he has to do battle with the actual monsters, we do end up rooting for him a bit. Not every actor could succeed in pulling off such a switch…but this is Peter Cushing we’re talking about.

I’ve also got to give a lot of credit to sisters Mary and Madeleine Collinson. Together they shared the Playboy Playmate of the Month honors in October of 1970 (the first twins to do so). Considering that this was the major cultural achievement of these two prior to this film, their acting abilities were much better than I would’ve imagined. Madeleine especially makes a great villain, but Mary also manages to counter by giving Maria a genuine innocence.

There are a few problems with the story, chief among them is the round about way that we finally get to Freida becoming a vampire. First the dead Countess comes back and turns the Count into a vampire, that way he can turn Freida into a vampire. Why didn’t we just skip the middle man? Now, I understand that this was an attempt to, in a small way, link this to the previous Hammer films, The Vampire Lovers and Lust for a Vampire, but it feels like a bit of a waste of time when watching this film on its own. It also takes quite a while before we get to any real vampire hunting action. Though Cushing does pull off a gruesomely cool head lob in the film’s climax.

In the end, Twins of Evil ends up delivering in the three big Hammer categories. It’s got some creepy atmosphere, we’ve got some nasty vampires, and they happen to be of the lovely lady variety. And since this is the 70’s the famous Hammer necklines don’t just plunge, they’re non-existent in some scenes. With Peter Cushing to carry us through some of the weaker aspects of the story, Twins of Evil manages to be a solid entry Hammer’s filmography.

3 thoughts on “Twins of Evil”