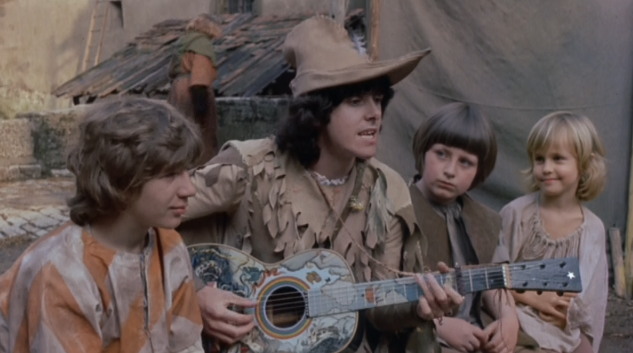 Why do movie producers so often believe that if someone is a talented musician that they must also be a talented actor? I mean, they never figure that someone who’s a good plumber would also make a good actor. But musicians, we see them in the movies all the time. Today’s film features the singer Donovan playing a famous character plucked out of legend and nursery rhymes. It’s 1972’s “The Pied Piper.” 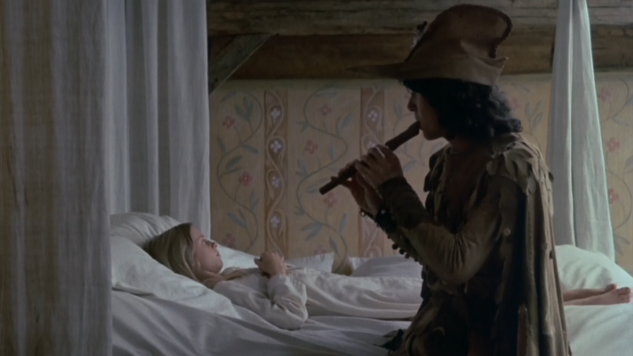 The story begins with a couple of gypsies (Keith Buckley and Patsy Puttnam). As they travel across the German countryside, they encounter a minstrel who calls himself the Pied Piper (Donovan). Together they travel to the village of Hamelin…which is having all sorts of problems. The Baron who rules the city (Donald Pleasence) is overtaxing the people to gather funds for his massive project to build a cathedral. Meanwhile, his military leader son, Franz (John Hurt), is anxious to wage a war. He’s also due to marry the young (and I mean very young) daughter of the Burgemeister (Roy Kinnear)…anxious to use her dowry to fund his military efforts. However, the girl is quite sick, the doctors can’t figure it out. But when she hears the music played by the piper as he enters town, she begins to respond. When the piper is brought to her room, she seems to recover completely.

The story now begins to shift, spending a lot of time focusing on an elderly man named Melius (Michael Hordern) and his apprentice Gavin (HR Pufnstuf’s best buddy Jack Wild). Gavin is an aspiring painter and walks with a crutch. Oh, and he also also happens to be in love with the Burgermeister’s daughter. As Melius begins to notice rats appearing around the village, he becomes concerned that the plague will soon follow. He is determined to find the cure, but Franz would rather have Melius work on making gold. Melius is eventually imprisoned for failing to meet Franz’s expectations. 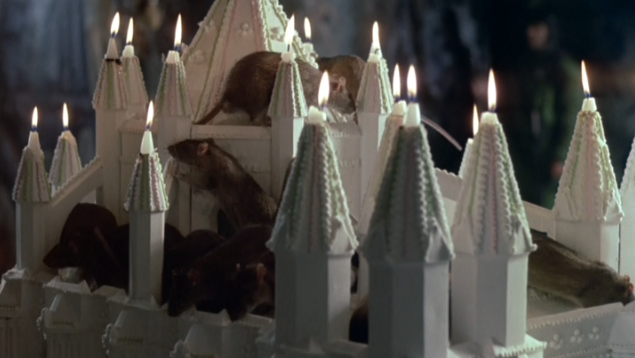 The town’s troubles soon explode when, during Franz’s wedding reception, the rats take over. They are everywhere and the citizens are terrified. But enter the Pied Piper who offers to rid the town of the rats for 1,000 guilders. Well, if you know the classic story, you know what happens next. The piper plays his flute and leads the rats into the river, but the townsfolk refuse to pay. Later as the citizen gather to watch Melius burned at the stake, the piper retaliates by leading all the children out of the town and vanishing.

This seems to have been produced as a family film. It reminded me of the sort of movies that used to be shown on WGN’s Sunday afternoon show Family Classics during my childhood. Who knows, maybe they even showed it once. But the legend of the Pied Piper is a dark one. I mean a strange musician abducts all the kids in town at once. That’s all in the original legend, but this story is padded out with 12 year olds in arranged marriages and nasty religious leaders. It’s not really kiddie stuff. And that’s not even counting the really gruesome and depressing ending. The really talky bulk of the film probably put most kiddies to sleep long before the nasty stuff, though. We do get the obligatory scene where Donovan sings a song called “The Pied Piper,” but for the most part, there’s not much that really appeals to kids in this film. 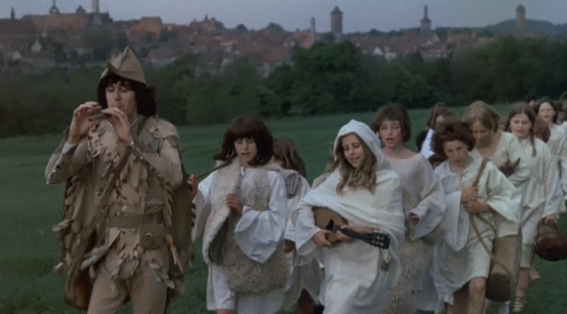 The big problem with the film is that there is so much that just doesn’t need to be there. The characters of Melius and Gavin are completely unnecessary. The subplot involving the Baron and his plans to build the cathedral, also just gets in the way. The piper, who is supposedly the central character, is absent from much of the film. No effort is made to make the piper a mysterious, or sinister, figure, and Donovan’s laid back approach to the role doesn’t help.

There are a few enjoyable aspects of the film. Donald Pleasence is fun as somewhat dopey Baron, and it’s hard not to enjoy Roy Kinnear. From touring Wonka’s factory to running around in a Mike and the Mechanics music video…I’ve always enjoyed him and his presence here is welcome. I also enjoyed the scene where the piper plays for the rats. The image of this shadowy figure parading down the dark streets with a large black mass of scurrying rodents following him is quite striking. It makes me think that the classic story does have cinematic potential, I just don’t think it was fully realized in this version.

3 thoughts on “The Pied Piper”